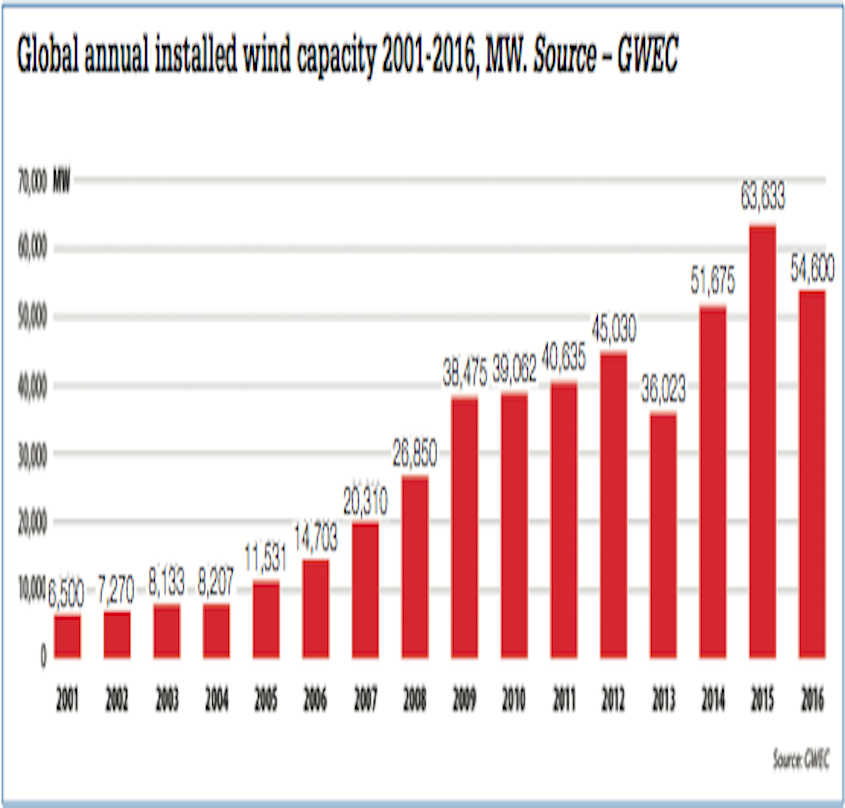 The 2016 global windpower market was 54.6 GW, bringing the total global installed capacity to nearly 487 GW. Installed volume was led by China, the USA, Germany, and India, with strong contributions from France, Turkey and the Netherlands, but was nonetheless lower than the record 63.6 GW total achieved in 2015.

“Wind power continues to grow in double digits; but we can’t expect the industry to set a new record every single year”, said Steve Sawyer, GWEC secretary general. “Chinese installations were an impressive 23 328 MW, although this was less than 2015’s spectacular 30 GW, which was driven by impending feed-in tariff reductions. Also, Chinese electricity demand growth is slackening, and the grid is unable to handle the volume of new wind capacity additions; although we expect the market to pick up again in 2017.”

The Chinese offshore market began in 2016 what many hope is the sector’s long-awaited take-off, with China passing Denmark to achieve 3rd place in the global offshore rankings after the UK and Germany.

US installations (8203 MW) were nearly equal to 2015’s strong market, bringing the total to more than 82 GW. The US industry now employs more than 100 000 people and has more than 18 GW under construction or in advanced stages of development, a harbinger for a strong market again in 2017. Canada (702 MW) and Mexico (454 MW) posted solid though modest gains.

India set a new national record with 3612 MW of new installations, 2016’s 4th largest market; this brings the country’s total to 28 700 MW, consolidating its 4th position in total cumulative installations as well. “We have great expectations for the Indian market”, said Sawyer, “and we look forward to seeing offshore making a contribution in India in the next few years.”

Europe had a surprisingly strong year, given the policy uncertainty which plagues the region, posting modest gains with an annual market of 13 926 MW of which the EU-28 contributed 12 491 MW. Germany also had another strong year, installing 5443 MW to bring its total capacity to more than 50 GW, only the third country to reach that milestone. France had a strong year with more than 1500 MW, and Turkey broke the 1 GW barrier for the first time, installing 1387 MW. The Netherlands entered the global top 10 in terms of annual market for the first time, with 887 MW, most of which was offshore.

“The cost of wind power continues to plummet, and this is particularly the case for the European offshore sector, which has met and exceeded its 2020 price targets by a substantial margin, and five years early”, according to Sawyer.

Brazil once again led the Latin America market, although the country’s political and economic troubles resulted in a market that barely cleared 2 GW (2014 MW), but which still pushed the country over the 10 GW mark as it ended the year with 10 740 MW. Chile posted a record year with 513 MW installed, bringing the country’s total to 1424 MW, and Uruguay added 365 MW for a year-end total of 1210 MW. Peru (93 MW), the Dominican Republic (50 MW) and Costa Rica (20 MW) also had significant installations last year. While Argentina had no new installations in 2016, it now has a solid pipeline of more than 1400 MW which will be built out over the next couple of years.

Africa was quiet, with only 418 MW installed in South Africa, whose Renewable Power Programme is currently being held hostage to a power struggle between the president, his allies and Eskom on the one hand; and the energy regulator, the ministry and the industry on the other. Elsewhere, Morocco had a successful auction for 800+ MW of wind which will be built out over the coming years, and construction was nearly finished on the Lake Turkana project in Kenya. But Egypt’s renewable ambitions seem to be stalled for now.

The Asia Pacific region was also quiet, with only Australia adding capacity (140 MW) although there are signs of a strong revival in the Australian market.

“Overall, the industry is in pretty good shape”, concluded Sawyer, “with new markets emerging across Africa, Asia and Latin America, and the traditional markets in China, the United States and Germany continuing to perform well. We look forward to a strong 2017.”