Wind and water – working together

The energy storing wind dam project – first discussed in IWP&DC in January 2006 – is nearing the stage for full-scale construction. Stephen Wilson provides an update on this innovative project, while also paying tribute to the wind dam’s inventor, Allan McCreadie, who passed away in September 2009 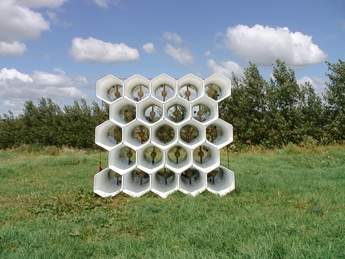 The energy storing wind dam project from New Zealand based firm Green Zephyr began with the intent of coupling wind power with pumped water storage, without the need for large electricity networks to connect wind farms with hydro dams. The wind dam was designed from the start to have no complicated control systems. It would utilise simple components and technology, enabling it to be used in places where access to expensive expertise and technology may not be available. The project started in 2001 and has so far been run as an in-house development.

What is an energy storing wind dam?

An energy storing wind dam uses wind to pump water. This water is stored for electricity generation on demand via a hydro generator. Other applications include irrigation or any situation requiring a raised water source.

The structure itself is made up from many hexagonal ducts, each housing a wind turbine and water pump within the duct. Each row of ducts receives water from the layer below and pumps it to the layer above. Each duct is approximately 5.4m tall (point to point) and varies in length depending on its position in the wind dam. Ducts near the bottom of the dam are longer, ducts at the top are shorter.

Instead of using electricity to drive a water pump, wind energy is used. A water pump is connected directly to a wind turbine via a common shaft. When the wind blows the wind turbine drives the water pump.

A single wind dam turbine is approximately 4m in diameter. At this size it does not have the capacity to pump a large amount of water, however many stacked together are used to gain the desired pumping capacity. To make this possible each turbine module is placed inside a duct or tube to provide a separation between turbines to minimise interference. The opening of the duct is hexagonally shaped for optimal stacking and reduces to a circular shape centrally to accommodate the turbine. This wall of turbines, or energy storing wind dam, requires a water source and an upper storage reservoir.

The number and size of turbines relates to the amount of energy extracted from the wind. Either one of these parameters has to change to increase the wind energy collected. With free field turbines, a much larger land area is required because the turbines can interfere with each other. Adequate spacing is required between turbines to avoid interference for optimal performance. However, an energy storing wind dam accommodates the close stacking of turbines due to the separation attained by the ducts minimising interference. This means there is a greater turbine density or wind collection area ie the wind sees the wind dam as one large turbine.

Energy storing wind dams have the huge advantage of being able to store energy. Duration of energy storage depends on the size of the water reservoir and the electrical consumption, but the design is for approximately 24 hours. Conventional wind turbines do not have this luxury and so must be used in an electrical grid. Here other modes of electrical generation can be varied to compensate for the sometimes inconsistent energy output from wind turbines.

Twenty three 1/8th scale energy storing wind dam ducts were manufactured in Green Zephyr’s workshop, including a scale foam nacelle in each. These 23 ducts were assembled to create the model to be tested.

Our results showed that the array of ducts had an effect of levelling out the wind flow, with all the ducts showing relatively similar wind speeds. Testing also showed that there was not a largely significant drop in relative wind speed through the ducts for wind angles up to 400 off axis. This means that the wind dam has a useful wind range of 1600 (as it is unable to yaw rotate into the wind).

We designed a wind turbine with the following properties:

• Ability to yaw into the wind so the turbine will rotate in the same direction regardless of which direction the wind is travelling down the duct.

• Geometry that allows the sail boom (like a yacht) to set and swing without changing the trailing edge tension.

• A minimal parts count mechanism to give a low velocity, highly cambered aerofoil at the blade base, blending to a higher velocity less cambered tip aerofoil.

• Camber changes with sail setting to favour both flow directions.

• A sail cut and support that allows the shear movement required.

• A method of preventing centrifugal air pumping through the internal sail space (double surface), which would otherwise ‘blow-up’ the sail tips and destroy the aerofoil section.

Successful construction and testing of a small scale (27%) working turbine has been conducted and Green Zephyr is in the process of constructing a full size working prototype.

Results show that our 27% scale wind turbine performed well, with a coefficient of performance of 0.3 when the tip speed ratio was 5.

We have also designed and tested our own pump. This was because there were no conventional water pumps with the exact performance range we needed for the wind dam. We began with small scale testing and have finished with a full scale pump. The target efficiency was 60%.

The water pump performed to a satisfactory level for proof of concept, obtaining the desired 60% efficiency across the operational range for the wind dam. There is potential for further improvements in pump efficiency by optimization of the impeller, with scope for computational fluid dynamics analysis.

If the project were to continue the future plans are as follows:

• Construction of a fully working pilot energy storing wind dam (which will require partnership with an electricity supplier and/or large scale funding).