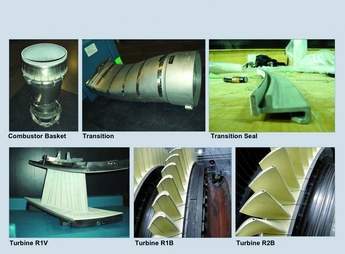 Flexibility is a feature increasingly emphasised by gas turbine makers when promoting their products, and with good reason. The recent sales successes of Alstom’s GT24/GT26 machines, for example (see p 16), owe a good deal to their low emissions and high efficiencies at part load (which derives from the use of the sequential combustion concept).

Citing “the need in the power industry for additional operational flexibility”, GE Energy has recently introduced what it calls OpFlex Extended Turndown, which enables “customers to operate their 9FA+e gas turbines with additional turndown without jeopardising performance, reliability or emissions”, says the company.

Currently, the typical turndown minimum for the 9FA+e gas turbine equipped with the DLN 2.6+ combustion system is 40% load at ISO conditions. OpFlex Extended Turndown is targeted to provide a minimum of 5 percentage points additional turndown. By reducing the turndown to 35%, operators are able to reduce the amount of fuel consumed during off-peak hours and avoid shut-down and start-up costs, as well as minimise maintenance requirements associated with shut-downs.

This enhancement is the latest addition to the OpFlex product line, which aims to provide a range of solutions to improve the operational flexibility of 7FA+e and 9FA+e gas turbines.

Another member of the product line is OpFlex Wide Wobbe, which has been recently adopted by a power provider in California for use in a combined cycle plant.

The OpFlex Wide Wobbe model-based control (MBC) technology is being installed on four 7FA+e gas turbines at power plants in the southwest region. On two of the units the MBC technology has been installed as part of Mark Ve control system upgrades – the first such upgrades to include it.

In line with the current drive to burn fuel with a greater compositional variation, the plants are switching to liquefied natural gas (LNG) from an offshore terminal. Installing the OpFlex Wide Wobbe system enables the turbines to operate with compositional fluctuations in the natural-gas-derived fuel while maintaining performance, reliability and operating flexibility.

When running LNG, flame stability, emissions and dynamics issues are typical operational concerns due to the greater variation in fuel composition.

The MBC technology automatically adjusts control parameters based on actual gas turbine performance and environmental conditions, allowing the units to operate within plus-or-minus 5% variation from a baseline Wobbe index while staying within emissions constraints.

“Having the flexibility to burn fuel of fluctuating composition is a key benefit in today’s competitive power market,” said Dan Heintzelman, president of GE Energy’s services business. He also expressed enthusiasm for the model-based controls system and said GE is “developing additional ways in which this technology can be applied to deliver further operational and performance benefits.”

The improvement of fast start capabilities is another key area in which GE has been developing OpFlex. The company recently announced the introduction of “10 minute start-up capability” for its Frame 7FA gas turbines (Figure 1), providing lower emissions and higher efficiency during start-ups.

The 7FA gas turbine with the new start-up capability “will be able to dispatch in 10 minutes after a start signal”, says GE and will “achieve stable combustion capable of NOx and CO emissions of 9 ppm within this period.”

When integrated into GE’s next generation Rapid Response combined cycle power plant design, this turbine has the ability to reduce start-up emissions for a 207FA system (two gas turbines and one steam turbine) by as much as 20% and increase starting efficiency by up to 30%, says the company.

GE believes its Rapid Response combined cycle power plant design will be of interest to power companies wanting to extend operation under an emissions cap, contemplating cyclic duty, or looking to tap into additional revenue from the ancillary market by being able to offer 10 minute start-up.

To achieve the ten minute start-up capability use is made of advanced fuel scheduling and purge credit technologies, complementing GE’s Rapid Response combined cycle power plant technology. Targetted for 60 Hz markets, the 7FA with ten-minute start-up, will be available for simple cycle applications in 2009 and combined-cycle operation in late 2010.

Recognition of a growing demand for fast start up, even in the case of large gas turbines, was one of the reasons why Siemens elected to dispense with any form of steam cooling in its new H class technology (see Modern Power Systems, May 2008, p 61, and September 2007, pp 41-44).

Siemens is also promoting the fast-start capabilities of its SGT6-5000F (formerly W501F) gas turbine package with static frequency converter (SFC). The company claims this is “the only frame gas turbine that can qualify for 10-minute non-spinning reserve.”

This is based on the ability of the upgraded SGT6-5000F with fast start package to provide 150 MW in 10 minutes (Figure 2), reaching full load in 12 minutes, with no additional start-related maintenance impacts. Siemens believes the SGT6-5000F is the only 60 Hz turbine in the world that can achieve this. In addition Siemens reports that time-to-accelerate has been reduced from approximately 13.5 minutes to 5 minutes (also shown in Figure 2).

The first SGT6-5000F with fast start package is being supplied by Siemens to Great River Energy (GRE) for its Elk River simple cycle plant in Minnesota. The order volume is USD 41 million.

With a nominal capacity of approximately 200 MW, the plant will provide power to respond to the growing demand of the greater Midwest Independent Transmission System Operator (MISO) region. It is expected to be commissioned in May 2009. Following the contract awards for Pleasant Valley I & II in 2000 and Cambridge I in 2005, Elk River is the fourth order placed by Great River Energy with Siemens.

As well as allowing GRE to power to the grid more quickly, the fast start capabilities will also lead to overall per start reductions in NOx, CO and VOC emissions.

“To enhance the value and environmental compatibility of new power generation assets, the US market will require power plants to provide a much higher level of operating flexibility, including lower start-up emissions and fast start-up capabilities, to react to market opportunities,” says Randy Zwirn, president and CEO of Siemens Power Generation, Inc.

Recent design enhancements incorporated in the SGT6-5000F (Figure 3) include upgrades to: the compressor (Figures 4 and 5); hot gas path (combustor, transition pieces and turbine airfoils, see Figure 6); and exhaust system. There have also been reductions in cooling and leakage air flows.

The new version, designated SGT6-5000F(4), takes features from the Siemens V84/94 machines, including much of the fast start technology, and combines them with Westinghouse W501G technologies.

The 13-stage compressor is a new departure. It has been operating since January 2004 at Siemens’ Berlin test facility and is also employed in the Siemens H machine currently undergoing validation testing at Irsching 4, which uses four IGVs instead of one, to increase flexibility and part load efficiency.