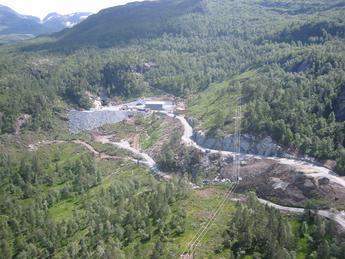 In May 2005, the Scandinavian Rock Group (SRG), part of the AF Group, won both major available contracts for tunnelling and other construction work to replace and extend hydro power resources at the northern region of Norway’s Sauda fjord.

The work, labelled the Sauda-Sønnå project and being carried out for electricity company Elkem at a cost of US$106M, is to build a complex arrangement of tunnels, connected to the existing Sauda III power plant, as well as construct and connect an underground power station at Sønnå. Another smaller plant further up the valley at Dalvatn, at the opposite end of the Dalvatnet at the end of the Sauda-Sønnå tunnels, is being constructed by Veidekke. The Sauda-Sønnå complex should eventually produce 1600GWh/yr, and work is expected to be completed before the end of this year.

SRG has made a rapid start on underground excavations for the project, and is employing two Atlas Copco Boomer 353 rigs, and, for working on up to three faces at once, a Rocket Boomer XL3C30 rig featuring the new COP3038 high-speed hydraulic drills. As the construction project progresses, up to six drill-rigs are expected to be used to tunnel 450m per week in spring and early summer 2006. From the main construction base and offices for SRG and AF, at the client’s smelter and minerals preparation premises at Sauda near the shores of the Saudaskjeret and adjacent to the existing Sauda III power plant, an access tunnel has already reached the location of the planned underground power station at Sønnå. Here the drill rig will continue for excavation of the generator halls and associated tunnels.

The project involves no dam construction. The main water inlet tunnel from Sønnå power station to Dalvatnet is of 38m2 section for a length of 9km. The upper and side feeder tunnels, such as the long drive south to Lingvang, is a 25m2 section. All are of ‘horseshoe’ shape except where room is required for a large (2m diameter) ventilation duct in the crown. This will be the case for long drives, and also allows enough headroom for operation of wheel-loader side-tipping buckets whilst mucking out.

Two Haggloaders will be used for mucking out, plus three Volvo 270 loaders in the main tunnels working with about 15 4×4, mainly Mercedes, highway dump trucks.

The ground is mainly clay schist and granite with an overlying of phyllites but is very variable in structural integrity. ‘We have to use rock bolt and sprayed concrete support as necessary,’ said project director Hans Olav Storkås. ‘In the access adits we needed arch supports as well. We have some water leakage, but the rock condition has shown improvement a lot.’

The new power plant at Sønnå will be fed with both low and high pressure water sources to drive its three turbines. The low-pressure feed (Sønnå L) will come from the existing Tiløp tunnel, currently feeding the Sauda III power station, whereas the high-pressure feeds (Sønnå H) will come from the new tunnels. As these exploit mountain-top water resources, the pressure head is substantially greater. A total flow of 50m3/sec will be required to feed the three turbine generator sets of 265MW capacity – two rated at 120MVA and the other at 70MVA. Although the larger lakes in the area to the northeast of Sauda have already been substantially exploited for existing power stations, the extensive system of new tunnels in this project will divert other mountain-top water resources using, it is intended, raiseboring as necessary.

The second construction site, at Raundalen, some 5km from the town of Sauda along the Stroelva valley to the northeast, is the base for this work. A short track off the main highway brings visitors to the Raundalen site where a portal begins a short access tunnel to an underground junction from which three faces are being driven northeast to the Dalvatnet (which is already being exploited for Sauda I hydroelectric plant), southeast to the Grimsvatnet area, and west to a junction with another planned tunnel and thence on to the Sønnå power station caverns. Three of these five tunnel drives will tap intermediate water flows by means of shafts. Raise-boring is planned to commence in 2006.

At Raundalen, SRG operates an Atlas Copco Rocket Boomer XL3C30 with COP3038 drills to work on three faces cyclically, although additional rigs were added as drives lengthened. At the time of the author’s visit to the Raundalen site, another Atlas Copco 353 rig was to join the Rocket Boomer XL3C so two of the three faces could be drilled at the same time. An additional rig was delivered at the end of October. All rigs use Atlas Copco Secoroc Magnum SR35 ballistic button bits.

Commenting on experience so far with the COP3038-equipped rig, Storkås said: ‘The drills have been quite good. We have had problems with some shaft breaks but are working on it with Atlas Copco. The drill works very fast; about 30% better than we are used to, excluding downtime. We have quite hard rock with joints and continuities, but we get over 100 drill metres between regrinds.’

Shift Boss Håvard Åmot reported a usual penetration rate of about 2m/min using the Atlas Copco’s COP3038 drills: ‘It was about 1.2m/min with the previous drills, so it’s a big improvement.’

In the Sauda access tunnel to the power caverns, the Atlas Copco Boomer 353 is being used along with data logging of all operational functions and card input of pre-programmed drill patterns. In addition to the standard Secoroc Magnum SR35 bits used for blasthole-drills, larger bits are available for long probe hole drilling and for spiling holes as required. After blasting, the face is scaled with a blunt tool hydraulic hammer mounted on a Caterpillar 320B tracked excavator. Both tunnelling sites use Dyno Nobel Titan site-sensitised emulsion (SSE) explosive, together with 150mm-long Dynomit primer cartridges and electronic detonation.

The six intermediate inlet points, mainly from streams and requiring diversion shafts, are likely to necessitate raise-boring with mainly helicopter access to the uplands. The scheduling of these operations will need to avoid the excessive use of expensive helicopters, although the shaft site nearest to Raundalen will have track access. Most raise-bored shafts are expected to be of 3.5m diameter.

Such a large and intensive underground construction project produces large quantities of spoil. Once the full tunnelling programme is underway from Raundalen and the power station caverns, the project will produce some 10,000m3 of rock per week. The main spoil dump is about 3km from the Sauda site. Of the total spoil, some 1Mm3 will be deposited in the high valleys to form agricultural land.

In addition to the complex arrangement of tunnels and shaft ‘taps’ feeding the Sauda-Sønnå project (see Table 1), some smaller projects are underway further to the northeast – not directly connected to the Sauda complex but in the same catchment area. The largest is for the small power station being constructed further up the valley at Dalvatn, with water feed from the Holmavatnet. The new structures are being constructed by Veidekke Entreprenør AS in a contract worth US$9.6M (excluding tax), and will be completed during 2006. There is a similar project at Sleetdalselva and smaller water tunnel drives at Istjona and Reinsvatnet (see Table 2 for details of the main projects).

Sauda-Sønnå is now well on schedule. Due to the geography of the multiple tunnel routes, it is possible to bring part of the project into operation whilst the other is still being constructed. The main system is due for completion in late 2007 with water flow in November. Completion of the two high-pressure units will be one month apart, followed by the low-pressure unit a month later. The power station will be producing power from early 2008. The 9 km long Lingvang-Tengesdal southwest feed tunnel will commence construction in winter 2008.

Veidekke’s work on Dalvatn power station is expected to be in production in September 2006, before the Sauda-Sønnå complex comes on line. Alstom is supplying a 10MW turbine/generator on a turnkey basis for this scheme.