Tripod invasion of the North Sea 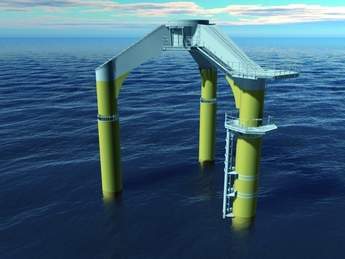 Bard Engineering is currently installing a 5 MW VM test and demonstration turbine nearshore in the river Jade near Hooksiel, Wilhelmshaven. In the process it will also place the first ‘Tripile’ foundation, a structure essentially identical to the tripod tower foundations planned for offshore use.

The huge turbine is being installed between the Hooksieler outer harbour and the Ineos-Lösch bridge, about 400 metres from the shoreline. The water depth varies between two and eight metres. The VM will be installed and assembled on-site with the help of a DEMAG large crane, a jack-up platform and special heavyweight pontoons.

The anchoring depth of the three piles will be around 44 m, and to position them the world’s largest pile driver hammer will be employed in a process that is expected to take about 48 hours.

The nacelle will be installed at a hub height of 90 m above water level, with a rotor diameter of 122 m. For the first time the Bard installation team, as well as associated service providers, will be able to rehearse in detail the complexities of installing the foundation and the wind energy converter and its components under real conditions at sea, in preparation for the later installations offshore.

In July a coastal freighter delivered the last two of three box sections for the foundation structure to Cuxhaven Steel Construction. Each of the sections, which have been made in Tallin, Estonia, is 12.8 m in length and weighs around 71 tons. The sections (shown grey in the graphic above) are currently in the process of being fitted to the central tube, which will hold the tower, the whole assembly to be installed in due course on the foundation piles.

This demo turbine will be identical in construction to the 80 turbines due to be installed, starting in spring 2009, around 100 km northwest of the island of Borkum in the already permitted wind farm Bard Offshore 1. Grid connection will be through a 20 kV line to Wilhelmshavener Gas und Elektrizitätswerke.

Offshore 1 is the first of several wind parks currently planned by Bard, which aims to become the biggest offshore operator in the German Baltic and North Seas. At present, there are no wind farms along Germany’s coasts. It currently has seven further applications with the Bundesamt für Seeschiffahrt und Hydrographie (BSH) in Hamburg, and environmental studies have already begun. Permissions for three further wind farms in the Dutch North Sea have been applied for.

Preparatory activities for the start of construction at Borkum are already well underway. The Lithuanian Western Shipyard (UAB) in Klaipeda has began construction of a transformer substation platform for Offshore I scheduled to begin operating in July 2009. UAB is also constructing a specialised platform known as ‘WindLift1’ designed for the installation, and maintenance of the wind park. This is scheduled to begin operations in the open sea next year. The vessel is a little over 100 m long and is able to raise itself out of the water on four 70 m legs. The crane on the main deck has a maximum lifting height of 121 m and can handle weights of up to 500 tonnes. The jack-up vessel also has a special template for laying the Tripile foundations.

In 2007 a $400 million contract was awarded by E.On to ABB for the construction of a cable and shore connection to the E.On Netz power grid. It will employ ABB’s HVDC Light technology.