Trigeneration takes off at Barajas

Reducing the running costs of building complexes is becomes more of an imperative as fuel costs rise, adding to the financial attractiveness of combined heat and power solutions. There are fewer genuine applications for trigeneration – combined power, heat and cooling – but airports are among those that are, if carefully managed. 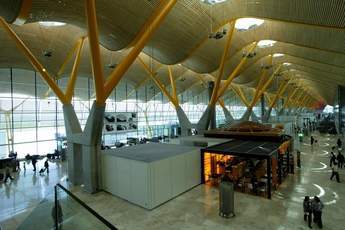 Owners and developers of building complexes currently prefer the more energy efficient option of a central climate control system to having many smaller electrically driven units for heating and cooling, the object being to reduce running costs. A combined heat and power (CHP) plant that can provide electrical power as well as heating and chilling for these buildings from a single power and energy source on-site provides significant operational and efficiency advantages. This method of multi-thermal energy production, known as ‘trigeneration’, is combined heat and power taken one stage further by including an absorption chiller which supplies chilled water without using electrically driven compressors.

For the total efficiency of a trigeneration plant to be maximised, it needs to be located close to end-users, since it is more difficult and costly to distribute hot water or chilled water than electricity. Moreover, as 70 % of the plant’s peak cooling capacity is usually enough to meet most of the building’s annual cooling needs for airconditioning, the remaining 30% can, alternatively, be supplied using conventional compressor refrigeration, a solution that minimises the total investment cost of the chillers. The chiller capacity can be further reduced by including cold water storage, which also gives more freedom to control capacities separately. But the general philosophy and control strategy is of critical importance and should in any case be carefully evaluated. The optimal solution is seldom one where the entire chilled water load is met by absorption chillers.

For trigeneration, a single-stage absorption chiller connected to the hot water system is the most suitable solution. A single stage machine, despite its relatively low COP of around 0.7, is necessary in such an application owing to the relatively low temperature of the heat source. Coefficient of performance is the ratio of cooling capacity to heat (or electrical) input.

Absorption chillers are heat-driven cooling machines that can be applicable where chilled fluids at temperatures above 0°C are required. Instead of a mechanical compressor they use a thermal system, utilising lithium bromide (LiBr) as the working fluid and water as the refrigerant. They are often cited as an environmentally sound alternative to the CFCs used in the compression cycle, but that is an incidental benefit. Usually they are employed because they are able to utilise relatively low grade heat, and where it is readily available electricity costs may be saved, even after due allowance is made for the lower efficiency of the absorption cycle and the higher capital cost per kW compared to chillers based on compression cycles. They are to be found in a large number of petrochemical power and district cooling schemes to provide refrigeration solutions with capacities up to 25 MW producing chilled water down to around 2 °C.

The airport extension in Madrid has been one of the most important European engineering and construction projects in recent years. It involved the construction of two terminals, a main passenger terminal that includes ticketing, baggage handling and passenger embarkation and a second satellite passenger terminal connected to the main terminal by an underground train. The extension project also included the addition of new runways, a new road system for access to the airport, and various other airport related services.

AENA (Aeropuertos Españoles y Navegación Aérea), the Spanish airports authority, chose a Spanish engineering company Sampol (Sampol Ingenieria y Obras S.A.) in 2003 to supply power and thermal energy to the new extension. Sampol and its power partner Wärtsilä were able to satisfy AENA’s requirements for a cost-efficient cogeneration plant that was technically advanced, environmentally friendly and able to guarantee the extremely high level of reliability necessary for this key facility in such an important location. The trigeneration plant was commissioned in 2005. and has now been successfully running in full commercial operation for over a year.

Under the EPC contract for the new building, Wärtsilä was responsible for the supply of the entire power plant which consisted of the plant engineering, equipment, installation, commissioning and start-up of the six Wärtsilä 18V32DF dual-fuel engines and their auxiliaries, as well as the heat recovery boilers, the engine hall ventilation systems and the engine control system.

This contract illustrates well the plant intensive nature of trigeneration. The financial logic of a CHP system often depends on maintaining high fuel efficiency at the prime movers, a difficult task when loads vary frequently or widely and cannot be smoothed by storage or by spot or base load sales to the grid or a local buyer, or if seasonal effects are marked and unpredictable. The right circumstances are more likely to exist where loads are more predictable, such as in an industrial complex. and that is indeed where most CHP systems of any size are found. Usually the loads have to be balanced by the addition of auxiliary plant, such as boilers and small generator sets, which of course adds to the investment cost and considerably complicates the energy cost calculations.

For a system that has to balance power, heating, and cooling, the difficulties are disproportionately multiplied and it is no surprise therefore that the field of likely applications is limited. Wärtsilä have become something of a niche specialist in the area and find that structures that combine the characteristics of mass public use and an industrial complex – hospitals, undercover shopping precincts and as in this case, airports – offer the best chance of a financially viable trigen solution. Such building complexes are also likely to have a heating and airconditioning load that outweighs the electrical load, an important consideration when even the most efficient heat engines create 40% more waste heat than electrical power.

Connected to the airport terminal’s grid and the public grid, the trigeneration plant provides a net power output of 33 MWe, a heat output of 33.6 MW and a total cooling capacity 40.2 MW. It can run on natural gas or oil.

Cooling water at 6°C is supplied by six absorption chillers to the airport’s airconditioning load. There is also a standby facility based on six Trane centrifugal units to supply peaks in the summer load. Final thermal adjustment on the cooling side is provided by three evaporative cooling towers supplied by a pond that contains a three day supply, a necessary precaution in a region that has very low summer rainfall and is subjected to water shortages as a matter of course.

In the winter the peak hot water demand exceeds the recovered heat from the engine plant and is supplemented by an 11 MW stand-alone gas fired hot water boiler. The same boiler also tops up the heat sent to the single-stage absorption chiller to produce chilled water in the summertime.

Sampol, which runs the plant under a maintenance agreement and supplied the heat exchangers and chilling equipment, has experience in smaller premises such as health complexes but this is the company’s first large scale generation plant. It is supplying the airport with 18-20 MWe at a very flat demand profile, which dips slightly during the night time. There is therefore a more or less permanent capacity margin of 13-15 MWe. Excess generation is sold to the grid through a permanent two-way connection. Supply to the grid from this

heat-led plant is under a day by day contract, a contract that stipulates permanent availability (which achieves the best selling price) and based on an estimate for the day’s supply that is provided to the dispatcher every twenty four hours.

There are two distinct SCADA systems. Reflecting the system’s critical importance to the running of the airport, the primary system is 100% backed up by a second system. The SCADA sends data to the airport’s own management system, primarily to keep a running check on fuel efficiency and maintenance schedules, and for analytical purposes.

The plant’s six Wärtsilä 18V32DF engines burn natural gas as their main fuel and light fuel oil (LFO) as the back-up fuel, and their emissions comply with the local environmental laws. In compliance with Spanish and other European engineering and construction standards, the plant meets the airport’s own regulations. The plant is normally run in heat-led mode, so the outgoing water temperature is controlled by changing the engine load.

Each engine is cooled by a dual circuit, LT (engine) and HT (exhaust). The latter splits further into two sections, at 92°C and 98°C, an arrangement that provides the greatest heat gain. In normal running all this heat output is used by the heating and airconditioning unless there is a fault, in which case excess heat can be dumped to an air-cooled externally sited ‘radiator’. LT coolant water is used to pre-heat the engine inlet air to a constant 49°C.

The engine room has its own cooling system, based on a roof mounted evaporative system, to keep it at the 20°C ambient temperature specified by Sampol. Without it the room temperature would rise to 60°C. Each of the six waste heat smoke tube boilers has a stack with a diverting damper, but these do not get much use.

They have very high electrical efficiency, which is also maintained at part loads and over a long period of time under severe operating conditions. The lean-burn engine is less derated than gas turbines by ambient temperature, altitude and back-pressure, nor does it suffer from reduced electrical efficiency or loss in rated output as it accumulates running hours. Lean-burn gas engines can easily handle varying load and frequent starts and stops. The gas engine is also insensitive to variations in the operating conditions.

The essence of a trigen system is to use this waste to meet space heating loads and for cooling via an absorption chiller that can use relatively low grade heat directly. Such chillers are more expensive and less efficient that rotating engine chillers – but the alternative is to use an electricity consuming centrifugal or recip compressor.

It provides electricity on a continuous basis, as well as thermal energy for the airport extension’s heating and cooling. The plant’s engines, heat production equipment and chillers are all housed in a new building alongside the airport’s newest and biggest runway.

Owing to heat and chilling load variations the plant contains a gas boiler and compressor chillers for peaking and stand-by operations.