Trianel demonstrates the power of working together 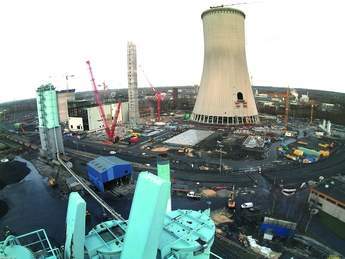 By power industry standards Trianel is a relative newcomer, having been founded in 1999. It was formed in response to liberalisation of the electricity market by four German municipal utilities (Stadtwerk) who decided that joining forces was the best way to tackle the new challenge of power trading, with the aim of securing low cost power for municipal energy providers.

Over its first ten years the company has grown substantially and now has 46 Stadtwerk shareholders and 40 associated partners, not just in Germany, but all over Europe, and can claim to be the leading European co-operation platform for municipal utilities. It has become a major player in wholesale power and gas, emissions trading and retail.

In 2003 we took what to some was a surprising decision: we entered the gas fired power plant development and generation business, launching the 2 x 424 MW Hamm-Uentrop combined cycle project. This 450 million euro plant, which, unusually for Germany, was funded on a project finance basis, entered commercial operation in the autumn of 2007. It employs 40 operational personnel and boasts an efficiency of over 57.5%. The plant is owned by a consortium of 28 Stadtwerk, while a contract for operation & maintenance has been placed with Fortum.

Our standard procedure for power plant project development is shown in the diagram below right.

Trianel’s principal role is as a project developer, while the plants themselves are owned by consortia of utilities (the ownership structure varying from project to project) – enabling partners to participate in capital intensive projects that they would not be able to realise on their own.

In the renewables sector we expect shortly to make a decision on constructing the Borkum West II offshore wind farm, in which there are 40 Stadtwerk partners. This wind farm, representing a total investment of about 600 million euro, will have an eventual installed capacity of 200 MW, and a letter of intent securing the right to purchase forty 5 MWe M5000 wind turbines has been signed with Multibrid Areva. Construction could start in 2010. (The project has recently been awarded 42.71 million euro under the EU economic recovery scheme, see p5.)

In addition, we have a 750 MWe (net) coal-fired plant under construction at Lünen, with 27 Stadtwerk partners, and have recently (25 November 2009) invited EPC bids (from four potential suppliers) for a second 750 MWe (net) coal plant, at Krefeld.

A crucial factor to be taken into account in planning new fossil fired power plant projects is whether and under what conditions the new German government will extend the lifetime of the country’s nuclear power plants. As long as these deliberations continue, it is quite difficult to make a final decision on new fossil units.

The timetable for the Lünen project, which is 15 km north of Dortmund, in North Rhine-Westphalia, is shown in the diagrams.

With our small team of five people we managed to get from the idea of embarking on a coal plant (again taking many in the market by surprise) to start of construction in about two-and-a-half years.

During the project planning phase delivery times were increasing and prices were escalating so in 2006 we signed reservation agreements securing the supply of key components (including steam turbine, HP piping, boiler pressure parts, cooling tower and construction slots), and a number of other critical components were ordered prior to issuance of notice-to-proceed. As things turned out this proved decisive in getting the project go-ahead.

Notice to proceed was eventually issued on 1 August 2008 and construction started immediately. Commercial operation is scheduled for November 2012, and again an O&M contract has been placed with Fortum. At the time of writing the project is on schedule, and is not facing any quality or budget problems.

A turnkey EPC contract for the plant was signed in September 2007 with a consortium led by Siemens (which is responsible for overall project management and construction, steam turbine, mechanical and electrical equipment including I&C, transformers, switchgear plus various auxiliary systems), together with IHI and AE&E, the latter two companies forming a “consortium within a consortium” for supply of the boiler plus associated ESP, SCR, wet limestone FGD, and ash removal.

The plant is essentially the first to be based on the Siemens SSP5-6000 reference design, with only small departures to meet particular project requirements.

Other key contactors include Eurosilo, for the fully enclosed coal stores. The conveyors that take coal from the ship unloading station to the silos are also completely closed. Trianel is responsible for construction of the 380 kV 6 km connection to the grid (at Lippe) and coal unloading, storage and transport equipment.

The plant constitutes IHI’s reference for this type of supercritical boiler in Europe (the second installation being at Mainz Wiesbaden, which is currently on hold).

Key features of the Luenen plant are summarised in the table on p32.

The plant is required to be “carbon capture ready” and an area of 5 ha has been set aside for this purpose.

The reheat steam temperature of 610°C is a little bit lower than some other Siemens power plants under construction, eg RDK 8, which is rated at 620°C. But as an IPP rather than a major utility we have chosen to opt for the slightly lower risk associated with the lower temperature.

The Krefeld clean coal plant is to be located in the Bayer chemical park at Krefeld-Uerdingen, with full integration into the infrastructure of this chemical park. The plant will supply the baseload power/steam requirements of the park, with an extraction of up to 400 t/h steam in three stages (6, 16 and 70 bar). This will increase the overall energy efficiency to 60% – the highest level in Germany for such a large-scale power plant.

Krefeld is similar to the Lünen project, but as it is located on the banks of the Rhine the power plant will not need to use a cooling tower.