Treading water in the uranium market

The uranium supply industry is focused on maintaining near term viability while positioning itself for the much-anticipated market recovery. How long producers will have to continue treading water in order to survive remains the big question. By Thomas Meade and Julian Steyn 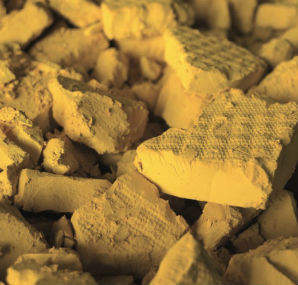 The uranium market continues to struggle with oversupply, which is forecast to continue beyond the current decade. There are several causes, but the decline in demand after Fukushima remains the primary one. Uranium production was slow to respond, as many new projects were developed following the 2006/7 uranium price run-up and the euphoria of the "nuclear renaissance". Mine production steadily increased through 2013 before finally declining in 2014. In addition, both transaction and operating tails assays for enrichment have declined, lowering uranium requirements and generating a new supply source.

The primary source of uranium supply for nuclear power plants is mined uranium, which amounted to 147 million pounds U3O8 in 2014. Production in 2014 was 7 million pounds or nearly 5% less than observed in 2013. (Note that one million pounds U3O8 is equivalent to 385tU.)
Uranium mining is largely concentrated in Kazakhstan, Canada, Australia, Niger, Namibia, and Russia, which together produced 124 million pounds in 2014 (85% of primary production). Uzbekistan, the USA, China, Ukraine, South Africa and several other countries provided the remaining 15% of mine production.

The uranium industry has few suppliers compared to other base metals. Ten suppliers controlled 88% of world uranium production in 2014, with the top four – Kazatomprom, Cameco, Areva and the combined ARMZ/Uranium One – responsible for 64%.

In-situ leach (ISL), also referred to as in-situ recovery (ISR), is now the dominant mining method, accounting for 51% of world mine production in 2014, up from about 10% in 2006. ISR projects are most prominent in Kazakhstan, but are notable in the USA.

Underground and open pit mining methods now account for 29% and 13% of world mine production, respectively. Open pit’s share was down noticeably in 2014, as output at Rio Tinto’s Rössing and Ranger mines was affected by operational and economic issues. By-product mining at the Olympic Dam copper mine in Australia and gold recovery operations in South Africa accounted for the remaining 7% of uranium production in 2014.

The oversupply has steadily increased during the past four years, and market prices for uranium have fallen in response. The U3O8 spot price indicator reported by TradeTech declined from $69.50/lb on 28 February 2011 to $35.00/lb on 31 July 2015. Still, spot price volatility has been limited during most of 2015 to date. The TradeTech U3O8 long-term price indicator’s reaction to the post-Fukushima market has been less severe than the spot market price indicator but still registered a major decline, from $70.00/lb on 28 February 2011 to $45.00/lb as of 31 July 2015.

The market response to incidents reducing supply this year, such as the Svedala mill outage at Olympic Dam, has been muted and the impending restart of two reactors in Japan has failed to provide the hoped-for lift. End-users are making discretionary purchases on a limited basis but remain sufficiently committed for the near term, and continue to withdraw when suppliers try to raise price. They see plentiful supply and are in no hurry to sign contracts.

Suppliers are holding firm on price and are generally unwilling to lower it to generate new sales, unlike early 2014 when the spot market price indicator bottomed out at $28/lb.

Kazakhstan has been the biggest uranium producing country in the world since 2009. Production has increased twelve-fold from 5 million pounds in 2001 to 60 million pounds in 2014 – 41% of the world total. More than 20 production centres are in operation. The Kazakh government has found it challenging to limit uranium production expansion during a troublesome period in the market. Production was 19% higher in 2014 than in 2011, but it finally appears to have levelled off. Maintaining uranium export revenues will remain a key concern for the Kazakh government but a 20% devaluation of the Tenge in 2014 may have eased some of the pressure to increase production and revenues. Uranium One’s temporary loss of subsoil rights at several sites in 2014 was resolved and did not affect production.

Canada produced 23.6 million pounds of uranium in 2014. The Cigar Lake mine has finally been declared commercial, but it will not reach its maximum capacity of 18 million pounds annually until about 2018. Production of 6 to 8 million pounds is planned for 2015. Regulatory approvals for increased production at Cameco’s flagship McArthur River mine have been received, although production was down slightly in 2014 due to a short labour dispute. Significant exploration continues in the Athabasca basin with substantial deposits at Patterson Lake South, Wheeler River and Rook I. Well-defined resources at Michelin, Millenium and Rough Rider await stronger market support.

Australian production declined by 22% in 2014 to 13.0 million pounds, due to a six-month halt in processing stockpiled ore at Ranger, following a December 2013 leach tank failure. ISL production at Four Mile East successfully ramped up while production from the nearby Beverley ISL centre ended. Rio Tinto has decided against developing the Ranger Deeps resource due to project economics and the termination of the current mining tenement in 2021. Expansion of the Olympic Dam mine remains postponed indefinitely. Exploration and development activity is ongoing in Western Australia, but Australian production is expected to remain at current levels over the next ten years.

Niger maintained uranium production at 11.1 million pounds in 2014 from Areva’s Arlit and Akouta mines. The smaller Chinese CNNC-owned Azelik mine was put into care and maintenance at the end of 2014 for economic reasons. Areva and the Niger government agreed in 2014 to put the Imouraren project on hold until market prices justify renewed development –probably after 2020. Political instability in Niger remains a concern, as highlighted by the May 2013 attack on Arlit.

In Namibia, there are two large conventional mines, which produced 8.5 million pounds of uranium in 2014 – down 24% from 2013. Rio Tinto is the majority owner of the very large, low-grade open pit Rössing mine that has been operating since 1976 but is now struggling. Rössing’s production declined an additional 36% to 3.4 million pounds in 2014 and the mine’s economics are a real challenge. Workforce was reduced by an additional 26% in 2014, as production will be limited to 4.4 million pounds per year to 2017 to fill existing contracts. While Rio Tinto appears committed to Rössing and its still sizable resources, the mine’s long-term viability may be in jeopardy if market prices do not improve.

Paladin Energy’s Langer Heinrich was brought into production at the beginning of 2007 and now produces about 5 million pounds a year. Paladin is concentrating on reducing costs, but could expand if prices rise. A third mine, the Husab project owned by CGNPC of China, is now in the late development stage. Ore mining commenced in 2015, milling operations are expected to begin in early 2016 and the mine is then scheduled to quickly ramp up to a nominal capacity of 15 million pounds a year by late 2017. Husab can produce at this rate for 30 to 40 years.

In Russia all uranium mining is controlled by the Rosatom subsidiary, Joint Stock Company Atomredmetzoloto Holding Company (ARMZ). Russian production was 7.8 million pounds in 2014, down 5% from 2013. Increases at the small Dalur and Khiagda ISL mines only partially offset declines at Priargunsky, which continues to struggle with lower grades, high costs and resource depletion at its existing mines. Mine 6 is being developed so that Priargunsky can remain viable, but is not expected to enter operation until after 2020. Production increases at Dalur and Khiagda will continue, but government plans for major increases in Russian output depend on development of the large Elkon deposit. Potential launch of Elkon has been postponed to after 2025 as ARMZ works to improve economic performance and further delays are anticipated.

Uranium requirements are expected to grow strongly, though the forecast has declined about 3% over the past year. The reduction in forecast requirements is primarily due to the assumption of a 0.20 w/o tails assay for the long term. Growth has been weakened by expected early plant retirements in the USA and Sweden. France has plans to reduce nuclear’s share of generation to 50% by 2025 and the restart of reactors in Japan continues to prove difficult.

In an effort to strengthen balance sheets, merger activity is taking place among producing and exploration companies. Recent examples include Energy Fuels and Uranerz; Uranium Resources and Anatolia; and Denison Mines and Fission Uranium, as well as Toro’s incorporation of Lake Maitland into the Wiluna project.

Although several ISL projects still have near-term production plans – Peninsula at Lance, Quasar at Four Mile, Anatolia at Temrezli – most are concentrating on pre-development licensing and economic assessments for future financing. These activities will allow the most promising projects to be developed quickly once prices rise.

Suppliers remain confident in the longer-term prospects for nuclear power and the uranium market and are positioning themselves for market recovery. Many miners insist that uranium prices must rise to an "incentive price" of $60 or more if new projects are to be developed. In the nearer term, the market may receive a boost if end-users return to more substantial term contracting activity. While contract coverage one to three years out is consistent with historical behaviour, coverage five to ten years out is below historical norms, according to the US Energy Information Administration and the Euratom Supply Agency.

While some investment analysts project a "supply crunch" in 2018-2020 most suppliers seem more cautious timing the need for new supply sources in the early 2020s. Current market conditions suggest that the price signals needed to support new mine development may not manifest themselves within the lead times needed for new mine investment. Whether this ultimately leads to another "boom and bust" price cycle remains to be seen.

The projected relationship of world uranium supply and requirements is shown in Figure 3. The top six uranium-producing countries in 2014 will continue their dominance through 2035.

Demand includes net strategic inventory-building, assuming two year’s forward requirements are maintained. We assume that while mines under development may move forward, there will be significant delays in bringing mines into production. No production from prospective mines is shown. Production from mines under development is dominated by the expanding Cigar Lake project in Canada, and Husab in Namibia, which have a combined nameplate capacity of ~33 million pounds per year.

The sizeable gap between projected production and forecast reference demand through the early 2020s indicates that there may not be much upward pressure on market prices until the next decade. In fact, significant discretionary purchases will be made by China. If China’s build up of strategic inventory tapers off more quickly than expected, or if large quantities of Japanese inventory are made available, there may be additional mine closures or cutbacks, including a slower ramp up of Cigar Lake and Husab.

When market conditions are supportive, there are more than 40 projects that can add to supply. Some have already received preliminary development and could be brought to production quickly, while others could take ten years or more. But this will need stronger market support than provided by current prices.