Topell Energy with a consortium of utilities has successfully trialled its torrefied biomass fuel at RWE’s Amer power plant at Geertruidenberg in The Netherlands. 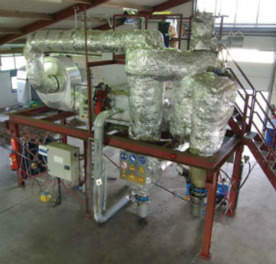 A consortium consisting of Topell Energy, the electricity companies Essent, Nuon and GDF Suez, and ECN, has successfully completed a large scale co-firing test at the Amer coal fired power plant in Geertruidenberg. The test was conducted under the ‘Top consortium for Knowledge and Innovation Bio-based Economy’ (TKI BBE) initiative and the fuel was coal mixed with an innovative renewable energy source consisting of processed wood pellets.

The test was considered successful because the raw biomass was converted into light, dry and very energy-dense biopellets and burned usefully to produce power. Nikolaus Valerius, head of the Dutch Essent power plants, commented: "The successful large scale co-firing of the biopellets is an important step in our contribution to a renewable energy supply where green materials are most efficiently and sustainably used."

"In the trial, a total of 2300 tons of the biopellets was successfully transported, handled, co-milled and co-fired."

In the trial, a total of 2300 tons of the biopellets was successfully transported, handled, co-milled and co-fired. Rob Voncken, CEO of Topell Energy, described the process. "The co-firing test took place in percentages ranging from 5% and 25% (on one mill) between 1 November and 30 December 2013. No adverse effect on milling and burning was detected in any of the tests. The trial therefore confirms that high quality biopellets can be produced and co-fired at large commercial scale. Together with its high energy content and density, this confirmation makes torrefied biomass a potential better alternative to conventional wood pellets for substituting fossil fuels."

The process belongs to Topell Energy, a privately funded clean technology company based in The Netherlands that operates a large, commercial-scale demonstration plant in Duiven. It has developed a proprietary process for the production of high value solid bio-fuel from woody biomass. This process is generally known as torrefaction and the solid bio-fuel is referred to as torrefied biomass, refined biomass, or biocoal.

Torrefaction of biomass results in a fuel of higher energy-density, leading to cheaper transportation as well as more efficient conversion into heat and power, and therefore helps to improve the potential of biomass in energy production.

Torrefaction is a process used to produce high-grade solid bio-fuels from various streams of low-grade woody biomass. It involves heating the biomass to a temmperature between 250 and 300 °C, in an atmosphere free of oxygen. When biomass is heated at such temperatures, the entrained moisture and various low-calorific components contained in the biomass are driven out. At this point a process known as de-polymerisation takes place: the hemi-cellulose in the biomass starts to decompose and breaks down into polymers of a lesser size, which transforms the biomass into a product with coal-like characteristics. In this form it has considerable potential for co-firing.

"The physical properties of torrefied biomass, such as durability, homogeneity and hydrophobic behaviour are improved significantly compared to raw biofuel"

Torrefaction of biomass has three immediate benefits over untreated biomass: the calorific value (energy per unit of weight) increases considerably; torrefied biomass is easy to grind and can easily be compacted into a product with high volumetric energy density (energy per unit of volume); and the physical properties of torrefied biomass, such as durability, homogeneity and hydrophobic behaviour are improved significantly compared to raw biofuel, while the biological activity is strongly reduced.

Topell Energy originally demonstrated the suitability of its proprietary torrefaction system (TTS) for biomass conversion in its purpose built test facility, commissioned in January 2009, to test the process and establish well-defined and repeatable output specifications for a wide range of input materials.

Following a period in which more than 800 samples were tested successfully, the plant had collected enough of the necessary data to optimise the equipment for the first commercial plant.

Kees de Gooijer, director of the TKI BBE programme, says: "I am very pleased with the positive outcome of the co-firing trials. It constitutes a convincing proof that torrefied biomass can contribute meaningfully to the Energy Agreement targets of the Dutch government – 25 million GJ of electricity generated from biomass by 2020 – aimed at promoting green electricity and at phasing out fossil fuels. We also view torrefaction as an important enabler for the future production of bio-based chemicals and materials".

Some of the parties involved in the TKI BBE programme are now discussing the next step of mobilising larger quantities of torrefied pellets for the production of green electricity, in view of the requirements of the Dutch Energy Agreement which will come into force in 2015. Topell itself is preparing the worldwide roll-out of its technology by licensing it to bio-fuel producers.

This article first appeared in the April 2014 issue of ModernPowerSystems.