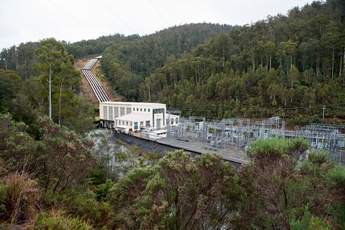 A refurbishment and upgrade project is underway on the more than half-century old Tungatinah power station in central Tasmania. Over the next three years, three of the five identical generating units at the 125MW project are to be modernised under the Aus$60M (US$69.2M) first stage of the modernisation programme.

The owner and operator, Hydro Tasmania, said the key reasons for the modernisation project at Tungatinah (5 x 125MW) are to: tackle age-related reduction in performance; risks associates with oil mist generation and potential for water contamination, potential penstock and spiral casing failure, and lower performance from governor, controls, wear rings and guide vanes.

In addition, with the plant already classed as one of the utility’s six most important plants, contributing about 5% of its trading revenue, Hydro Tasmania plans to upgrade the installed peak capacity and improve its efficiency.

The headworks of the Tungatinah facility are quite complex, says Hydro Tasmania, and in addition to the reservoirs and associated dams include a tunnel, canals, pipelines, flumes and control gates, and a pumping station. The 850m long, 4.4m diameter unlined rock tunnel – fitted with a trash rack, radial gate and also having a surge tower along its length – conveys water down 35m from Tungatinah Lagoon to five 2.2m diameter steel penstocks that run down the hillside to the plant. At the top of the pipes are fitted 1.7m diameter butterfly valves.

Tungatinah’s five generating sets were brought into service over 1953-56. The power station structure is a 71m long by 16m wide building for the turbine hall with two wings at either side – a two-storey control area and a store/workshop.

Tungatinah has a static head of 306m, rated head on the turbine-generators of 290m and rated discharge is 11m3/sec though the total flow through the plant is 50m3/sec. The flow is discharged directly to Nive River. Generating in the range of 515GWh – 539GWh of electricity per year on average.

Over its lifetime the plant and infrastructure has not required too much repair or replacement. Hydro Tasmania notes that with the water being basically clean and cold the corrosion rates are very low. Minimal maintenance has been required for the tunnel, and the trash rack needs are within normal levels.

However, due to reliability problems and consequent risk for downstream infrastructure, a roller gate was replaced with a radial gate in 2006. In addition to a one-time internal recoat, the penstocks have had external works including patch painting, refurbishment of expansion joints and also maintenance has been undertaken to the hillside drainage.

On the basis of all five generating units being refurbished and upgraded, the installed capacity of Tungatinah is to increase by 15MW and efficiency by 3%.

The scope of the modernisation includes major items of work on various areas such as, the turbine, governor, controls and protection, thrust bearing oil, lube system, brakes, alternator, and excitation.

• Governor – replacement with a hydraulic unit and digital controller;

• Alternator – tighten and clean rotor; and, clean and rewedge stator;

Hydro Tasmania says project development for the works commenced in 2000 and was revised with varying levels of intensity, due to changing business and strategic positions, over the next few years.

The utility said the development phase of the project was relatively straightforward, and began with pre-feasibility work then a definitive scope was produced upon which the final business case was based. The major technical decision was whether the spiral casing would be replaced due to cracking in the stay vanes, which could not be judged to be just initial casting cracks that were not progressing further.

In mid-2008 there was board approval for the first three generating units to be refurbished and upgrade, though due to business constraints the works would not be able to commence at the plant until October 2010.

The basic physical aspects of the generating units will remain the same under the modernisation programme – head, speed and generator performance. However, the capacity of each turbine is to be increased by 24% to 31MW, and efficiency of the units improved from 89% to 93%. In addition, the total flow through the units is to increase by 20% to 60m3/s – should all five be refurbished.

The static excitation system is an ABB Unitrol 6000, and was selected, Hydro Tasmania says, due to its established performance and to be consistent with the utility’s other excitation systems.

andritz Hydro is supplying the control system, and Entura (formerly Hydro Tasmania Consulting) the field electrical/instrumentation and integration design. The system is part of a wider programme-based, and standardised, approach to control system replacement over a number of power stations.

The balance of plant was designed by Entura and procured by Hydro Tasmania.

Under a separate project, completed in 2007, the electrical protection, generation transformers and associated switchyeard equipment were upgraded on all five units.

The first stage of the refurbishment and upgrade programme is to be completed over three years, working on one generating unit at a time. Hydro Tasmania is acting as head contractor.

The onsite work on the units commenced in October and was to be completed by late June the following year. To take advantage of the higher spring flows of July-September, the utility has blocked out that period for works and wants unit modernisation work finished by the middle of each year to ensure the entire plant is available for generation.

In sequence, the units are the be modernised in the following order:

• All major equipment has been supplied and is in storage

The utility adds that the project itself is quite straight forward, the only aspects of which it has not done recently is install a new spiral casing.

The plan for the final two units (Nos 3 & 4) in the second and final stage of the modernisation programme, will depend on the outcomes of the initial stage, says the utility.