Construction of South African utility Eskom’s Ingula pumped storage plant is well underway. Following last month’s focus on five new pumped storage schemes, IWP&DC was given a further update on the project which is due for completion in 2013 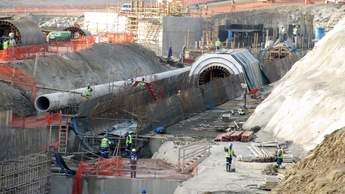 When encountering the Ingula pumped storage project in South Africa, you could be forgiven for thinking it is an eco-tourism destination rather than a major construction site. Postcard images of greenery and the majestic main mountain form a perfect backdrop to the construction works. The major works are all underground in the mountain, with the main underground cavern situated at a depth of 350m below the surface, along with 9km of tunnels which will be excavated during construction. The Ingula scheme is one of Eskom’s projects under a new build programme with the sole objective of increasing South Africa’s energy capacity.

The quest to find an appropriate name for Ingula power station was inspired by the mountains and the river waters, which represent the rich cultural symbols and traditions of the indigenous people on both sides of the border between Free State and KwaZulu Natal provinces. The name change from Braamhoek to Ingula was officially announced in March 2007. Ingula is a Zulu word which refers to the creamy foam on the top of a milk calabash (a fruit used as a bottle).

Ingula PSS aims to add power capability to the nation’s electricity grid during peak hours to prevent power shortages. South Africa requires 40,000MW of power by 2025 and Ingula is one of the projects currently being constructed to meet future demand. The majority of South Africa’s electricity is sourced from traditional coal-fired power stations, and Ingula’s power will act as a back-up during peak energy consumption to help power up the national grid.

When the Ingula PSS comes online in the later stages of 2013, adding a capacity of 1332MW and an energy storage capacity of 21,000MWh, Eskom will have made significant progress towards achieving its objective of increasing South Africa’s energy capacity by 2025. The estimated cost of the project is R20B (US$2.9B).

The scheme is located about 23km north east of Van Reenen, within the little Drakensberg mountain range. It comprises an upper reservoir in the Free State province, an underground power tunnel complex and power station, and a lower reservoir in KwaZulu Natal province. The distance between the upper and lower reservoirs is about 6km and the elevation difference is approximately 470m.

The upper Bedford dam is a concrete faced rockfill embankment dam about 50m high which forms a reservoir of total volume of 22.6Mm3 with an active storage of 19.3Mm3. The lower Braamhoek dam is a 40m high RCC dam forming a 26.3Mm3 volume reservoir with an active storage of 21.9Mm3. Grout enriched roller compacted concrete has been used at Braamhoek dam while sophisticated hydraulic modelling of the outflows from Bedford dam will ensure minimal impact on the sensitive wetlands downstream.

The underground powerhouse complex consists of the machine hall, a transformer hall and associated tunnels, shafts and caverns. The machine hall will house four reversible Francis type pump/turbines, coupled directly with generator/motors, each with a rated generating capacity of 333MW and a rated generating head of approximately 434m. The power station contains four Francis type reversible pump-turbines, coupled to motor-generators.

The generation plant is designed and supplied by Voith Hydro of Germany; who are using manufacturing companies around the world to fabricate the various specialist components. The first items are now being manufactured in Kenya and are due to be installed underground during 2011, with the completed generation equipment commissioned during 2013.

The pump/turbines will be connected to the upper reservoir by twin concrete lined headrace tunnels and pressure tunnels and shafts which are steel lined over their lower part. Steel lined extended draft tubes and a single concrete lined tailrace tunnel will connect the pump/turbines to the lower reservoir. Headrace surge shafts and tailrace surge chambers will also be provided.

The initial decision makers adopted a strategy to have a separate contract set up for carrying out the quarrying and crushing operations which would be used to feed the other projects within the Ingula project with their concrete aggregate needs. The quarrying and crushing operations commenced in May 2007 in the Braamhoek dam basin where the quarry would eventually be underwater after impoundment of the Braamhoek dam.

The rock being quarried and crushed is known as Dolerite, which is an igneous volcanic rock. The crystals in dolerite rock can be viewed with a handheld lens which indicates it cooled more slowly than basalt rock. Dolerite is very durable and resistant to weathering and is commonly used for crushed stone which makes its availability on site priceless.

The quarrying and crushing was contracted out to B & E International Quanza Joint Venture. There is an array of old and new plant purchased specifically for this project from the international market. The contractor has been in the crushing business for decades and is one of the leading crushing outfits in the country. It brought with it a wealth of knowledge from previous operations.

The quarry contract was recently modified to accommodate the increase in demand for aggregate by the main underground works. The original bill quantity required that, under the quarry contract, 1.3M tons of concrete aggregate be produced. However, the latest figure is 2.7M tons of concrete aggregate. The quarry occupies approximately 45ha of land for its crushing operations and stockpiles of final products. The contractor was set to quarry all virgin rock by the end of October 2010 before impoundment started in November 2010. Crushing will continue until May 2012 but the contractor will be loading until October 2013.

The Ingula PSS project upper reservoir is located in an environmentally sensitive area and considerable emphasis has been placed on environmental management in the design, construction and operation of the Ingula pumped storage scheme.

A partnership between BirdLife South Africa (BLSA), Eskom and the Middlepunt Wetland Trust (MWT), was launched in March 2004. The partnership aims to offset the negative impacts of the construction and operation of the pumped storage scheme. This will be done effectively by managing environmental impacts related to the area impacted by the Ingula project.

The majority of construction is underground. The dams and associated structures are built of locally quarried materials and are designed to be sympathetic to the landscape. The only other visible structures on the surface will be an administration building, a visitor’s centre and the switchyard.

Care has been taken to ensure that structures blend in with the surrounding landscape and are visually pleasing. There will be no elaborate landscaping done around the buildings. Materials from the area will be used to further soften any visual impact. All construction of temporary works areas will be restored to its natural habitat, which is primarily indigenous grassland.

As part of the conditions of the environmental authorisation, Eskom manages the areas surrounding the upper dam and construction sites as a conservation area. This area, in both the Free State and KwaZulu Natal, is of significant value as a source of water for the Highveld, and serves as habitat for a variety of plants, birds and animals, some critically endangered. The area includes high altitude grass lands, several wetland areas and indigenous escarpment forest. A team of full time professional environmentalists monitor all activities on site, ensuring all legal requirements are met, and that the project operates within the terms of the government authorisation.

Eskom is also working with palaeontologists in the area. They were brought in after the discovery of fossilised remains of prehistoric animals and plant life. Well preserved specimens are being sent to academic institutions, while other fossils are stored on site for display in the visitor centre on site or in a museum at a later date. The site aims to be an internationally sustainable conservation area and all activities on site are carried out with this long term objective in mind.

As part of the conservation programme a network of walking and hiking trails will be developed and other ecotourism opportunities investigated and implemented. These include campsites river trails and cycling. Marketing of the area may lead to an increased demand for accommodation, an opportunity for surrounding landowners and members of the conservancy.

Eskom, through the Eskom Development Foundation (ESDEF), has set aside funds and has planned for socio-economic development initiatives that include upgrading local schools, resettling families to better homes and provide assistance in agricultural training. Currently, Eskom has spent approximately R3M (US$0.4M) on local schools in the areas of Driefontein, Besters and Zaaifontein in KwaZulu Natal and Hamilberg Farm in the Free State.

Eskom will install electricity as well as provide access to water, roads, electricity and tenureship for all families who will be relocated and resettled. Furthermore, partnerships formed, through stakeholder forums, will incorporate departments of rural development and land reform, department of agriculture and relevant municipalities who will assist in providing services to the communities who reside within 30 kilometres from the Ingula project.