Tapping the potential at the Klovtveit project 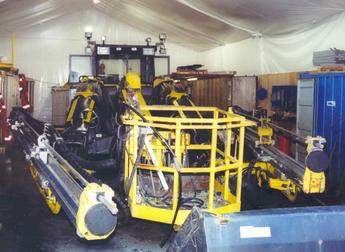 Although Norway has long been associated with hydroelectric power projects, it currently imports about 10% of its energy requirements at a time of high world prices. This is a higher proportion than ever before, and Norway has been an importer of electricity for six of the last ten years. Recognising the need and opportunities that this situation presents, many of Norway’s private hydro power generators are rapidly enacting plans to tap new resources.

One Norwegian contractor harnessing the country’s hydroelectric resources is AS Birkeland Entreprenørforretnining, based at Sløvåg on the coast some 20km from the Kløvtveit hydro power project.

The Kløvtveit project is a relatively small but demanding venture to draw water from some mountain-top lakes in the Gulan province north of Bergen, passing it to a new power plant on the shores of the Austgulfjorden (at sea level).

Birkeland is currently using the new model COP3038 drills on its Rocket Boomer L2C30 drilling rig, both from Atlas Copco, for the first phase of the 41.8GWh/yr Kløvtveit project for utility group BKK of Bergen, the third largest power company in Norway. Birkeland is in joint venture with contractor Spilde, with Birkeland mostly concentrating on underground work and Spilde mainly on the surface, although there are overlaps such as for surveying. The joint venture has completed the power plant itself, and most of the penstock pipeline running down the slopes of the fjord valley from near the tunnel portal. Access to the tunnel portal has been achieved by constructing a 25% grade rockfill road with hairpin bends from the power plant level to the required elevation.

The L2C30 is equipped with two operator consoles, the second of which is usually used for training and maintenance/fault-finding diagnostics. This can enable drilling to continue using the main console while the Atlas Copco product support technician uses the second console to check operational parameters.

The tunnelling team works on two 8hr shifts, although at the beginning of the project only one tunnelling shift was worked until the portal was cleared and road completed. Atlas Copco also supports its customer with two Product Support Technicians, Lars Hage and Georg Russland, based in Langhus near Trondheim, who make routine visits to the site once or twice a month.

At the time of this report, Birkeland was about to commence the final 85m of tunnel approaching the lake tap. Here the necessary precautions included a systematic probe-hole drilling and grouting programme to prevent ground instability and premature inrush. The tunnel section is being increased vertically to enable the Rocket Boomer L2C30 to be positioned correctly to drill at a steep angle for a short, 2.5m diameter shaft to be excavated, which, with the final blast, will break through to the bed of the Kløvtveitvatnet lake (level approximately 360m above national datum), thus providing the water source for the power plant.

In the final section the grouthole pattern drilling is installed to consolidate the whole ground in this area. Probe holes will be drilled at 45º from the crown, and at a vertical angle of 30º and 15º horizontal from the shoulders of the tunnel, all using the Rocket Boomer L2C30. The final section includes an expected short zone of weaker ground connecting to the lake shore.

Throughout the rest of the 9.64º (17%+) inclined tunnel drive, Birkeland carried out probe drilling with subsequent grouting. At least three such roof holes are drilled and increased to nine or ten for grouting, depending on the amount of water leakage.

The tunnel, of 670m total length, is formed in two straight runs forming a ‘dog leg’. Despite changeable ground conditions in hard gneiss Birkeland has achieved 30-55m per week progress using 59 6m blastholes across the face of 4.3m width x approx. 5.1m height, making a section of around 20m2. Bits of 48mm diameter are used for most of the holes, with four central holes reamed out to 102mm.

For the project, Birkeland uses Atlas Copco Secoroc Magnum SR bits with ballistic button inserts. The equipment is designed to promote longer life through a thicker section thread collar to the drill steel for greater rigidity and accuracy. Consumption at Kløvtveit is usually four bits for every round before regrinding, but sometimes six depending on the conditions.

The bits are refurbished on site using a Secoroc Grindmatic BQ2 grinding machine located in the prefabricated drill-rig workshop. This semi-automatic unit has been developed to considerably speed up correct positioning of the bit between each button grinding operation. It can be used for both blasthole and reaming bits.

After blasting, the face is scaled with an Atlas Copco SB450 hydraulic scaler equipped with a blunt-nose tool and mounted on a Caterpillar M316 wheeled excavator. The explosive is ANFO, mixed on a tractor-mounted portable unit, with electronic detonation.

Three or more 30t highway-type trucks are loaded at the tunnel face with a Cat 980G wheel loader with a 5.5m3 bucket. It therefore takes just about two bucketfuls to load the 10-11m3 truck body.

The spoil is disposed of partially for fill and road building, and some is crushed to cover a pipeline in the Austgulfjordan some 3km away. The rest is dumped in the fjords at planned locations.

Required tunnel support is minimal as the tunnel will be filled with concrete around the pipeline on completion from a point 170m in. Support installed is therefore mainly temporary to secure poorer ground. Some heavy rockbolting with shotcreting was required in a 100m length on the first leg of the tunnel. When necessary, mechanical or resin-grouted rockbolts are used with sprayed concrete, and spiling of the tunnel portal was carried out against deterioration of weathered rock and frost damage.

Apart from the ‘tapping’ shaft, the drive was completed at the end of last year. Subsequently the 1m diameter pipeline will be installed to be connected up with that on the valley surface. The pipeline installation will be completely concreted into the tunnel before the final breakthough into the Kløvtveitvatnet. Work should be completed on this part of the project by January or February 2006 after which snow may make access difficult.

Currently there is no easy access to the Kløvtveitvatnet on top of the mountains but, subject to planning permission being agreed by the local authorities, Birkeland will construct a permanent access road, 5km long, up from the Austgulfjorden.

In order to improve flow from this eastern limb of the lake, Birkeland will excavate a third tunnel under the Miåneset headland, also involving an underwater tap but with a breakthrough into the drained bed. Using the power plant pipeline the east limb water level will be lowered by 30m so that an additional construction access road can be built for construction of the portal of the Vetlefjellet tunnel to Austgulsvatnet. Construction of these three tunnels will commence this year, with the whole project due for completion in 2007.