Since 1997, a Swiss company has been working on the development of techniques for small turbines, with the objective of making their implementation easier and more efficient regarding construction, integration to the site, cost, performances, operation and maintenance. Such developments can be ideal for small and medium enterprise, and are designed to cut down future possible hydro-mechanical problems, based on systemisation using laboratory tests and computer-aided design (CAD) tools 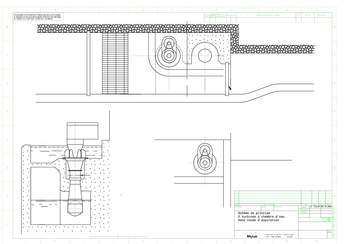 In the small hydro power sector (<1MW), different procedures are used to design turbines. Often a set of standard turbines that can be more or less properly fitted to the site to equip are designed; this or reduced-scale models of large turbines are developed, without knowing the impacts of their profile adaptation or simplification. Such methods cannot result in designing an optimal turbine for the site to equip. Notably, they imply that:

• The foreseen and sometimes even guaranteed performances cannot be upheld.

• The turbines operate under an exaggerated gate-opening so as to reach the required power resulting in an overloading.

• The evolution and impacts of cavitation are unknown.

Such methods often lead to hydro mechanical troubles, and even mechanical rupture.

In the face of these risks, a procedure that provides simple and reliable turbines with high and guaranteed performances is essential for the small hydro power sector. Such a procedure also has to be affordable for small and medium enterprise activities in the field.

Since 1997, MHyLab has been developing turbines (whether low-head axil or high-head Pelton) based on systemisation.

Systemisation leads to the custom design of the optimal turbine specific to each site to equip, defined by its head and discharges, but also by its infrastructure and environment.

Each designed turbine benefits from the hydraulic profiles (all parts in contact with water) improved on MHyLab’s test bench, chosen and determined by computer-aided design (CAD) tools: from hill charts and Microsoft Excel programmes to 2-D and
3-D drawings.

With regards to high head turbines, the systemised technique has, up to now, been applied to more than 30 machines, validating the transfer from laboratory to industry.

The procedure starts by testing the turbine models in MHyLab’s laboratory (Figure 1 and Figure 2:), and ends with CAD tools to design the turbine optimally suited to the site to equip, with a devotion to a criteria of simplicity, reliability (easy maintenance), high performances and low manufacturing costs.

The main development principles are as follows:

• Simplification of hydraulic shapes, and use of commercially available parts, leading to a turbine simple to manufacture and maintain, and thus low manufacturing and operation costs.

• Measure of the impact (efficiency and cavitation) of these ï„¸simplifications on the test bench.

• Parameterisation of all hydraulic shapes, function of the site’s data.

• Development of mathematical and computer tools to design the turbine specific to the site to equip, notably to reduce the turbine delivery-time.

Low-head sites are often erroneously considered to be easy to implement or rehabilitate. In reality, they are often more complicated than their high-head counterparts, since they can consist of many more constraints, such as: cavitation problems; integration to the existing infrastructure; recovery of kinetic energy in the draft tube; and construction and civil engineering costs, in front of the electricity production.

The systemised technique, developed through MHyLab’s SEARCH LHT programme between 2001 and 2006, defined a procedure to design the turbine. The main steps are:

• Generation of the efficiency guarantees.

• Generation of 3D drawings of the runner blades for the computerised numerical control (CNC) manufacturing.

From the site specification (mainly discharges and head), the optimal dimensioning point can be found by using the Excel files. It is defined by:

• The number of turbines.

• The number of blades (adjustable or not).

• The rotation speed (synchronous or not).

• The maximum efficiency at a certain discharge.

The first output gives an overview of all the dimensioning possibilities for a given number of turbines and blades. Figure 3 presents an example of a low-head site situated in Switzerland, studied by MHyLab, with a total discharge of 2.2m3/sec and a difference of level of 4.5m, corresponding to a 4-blade turbine.

The next steps consist of generating the graphs of the evolution of the turbine efficiency (Figure 5) and the turbine output regarding the discharge, aiming at determining the electricity production.

Moreover, these Excel files can also be used for:

• The evolution of the blade opening regarding the discharge, directly from the hill chart.

• The torque on the blade trunnion so that the constructor can dimension the control system to adjust the blade’s position.

• The turbine behaviour at runaway speed.

Drawing of the hydraulic profiles

The programme results in an automatic generation of the turbine hydraulic profile defined as all the wet areas (notably the inlet, guide vanes, draft tube and runner), composed of: an automatic 2D and 3D modelling of the turbine, using MHylab’s standards; unfolded views of the guide vanes; and the parts list and nomenclature.

Systemisation of the inlet

Mainly dimensioned from the runner diameter, the square-cross section inlet is composed of two quarters of a standard elbow as the lower part, and of a pipe curved to the required radius as the higher part. Its angle is adjustable to the turbine axis, or to the site infrastructure, while adapting the round-offs radius of the square-cross section. Moreover it is composed of guiding blades, made of curved standard metal sheets. Other inlets have been also defined as the one needed for a water chamber (see Figure 7).

Systemisation of the guide vanes

The guide vanes are defined from the runner diameter. Their angle can vary from 20 to 50°, while the thickness of the vanes corresponds to standard metal sheets.

Systemisation of the draft tube

In order to recover the kinetic energy in the draft tube, a strong effort has been made to design it simply and correctly with standard components. The best compromise has been found with an outlet speed of 2m/sec, while the draft tube is composed of several cone-shaped pipes in order to regularly slow down the water stream. Such a draft tube is dimensioned from the runner radius and the nominal discharge, and configured as shown on Figure 9 and Figure 10.

What can be noted is that, for vertical-axis turbines, the elbow is not always necessary (see Figures 11 and 12).

Integration of the whole turbine to the site

Especially for low-head sites, the integration of the turbine to the site is the key point. Figures 11 and 12 show two studied possibilities for the rehabilitation of the site mentioned earlier:

• With one turbine equipped with a square-cross section inlet, that directly integrates itself to the infrastructure, with a maximum discharge of 2.2m3/sec (as shown in Figure 11).

• With two turbines with water chambers, implying more important civil engineering works, but with a much higher discharge of 3.5m3/sec (Figure 12).

Systemisation of the runner

For each turbine defined by a certain number of blades, the blade profile has been defined and finalised so as to reach high efficiencies, wide operation areas without cavitation problems and a high strength to torque ratio. Designed in a 3-D Catia file, the blades will be manufactured using CNC machinery, which can generate a blade stringently similar to the one tested in MHyLab’s laboratory.

First applications of the LHT project

As the project has just finished, only two power plants have been put in operation. Both validate the transfer from laboratory to industry:

The high potential in Europe, notably for rehabilitation, and the preliminary and detailed projects achieved by MHyLab, predicts a great future for the low-head development chronicled here.

This paper was originally presented at Hidroenergia 06, held 7-9 June 2006 in Scotland, UK and organised by the British Hydropower Association (BHA) and the European Small Hydropower Association (ESHA). For further information, visit www.british-dams.org or www.esha.be. The paper is reprinted with kind permission of the conference organisers