A record drought in the Spring of 2002 gave engineers the chance to repair freeze-thaw damage at Dillon dam by installing a new stainless steel liner,reports Sal Todaro and James Weldon 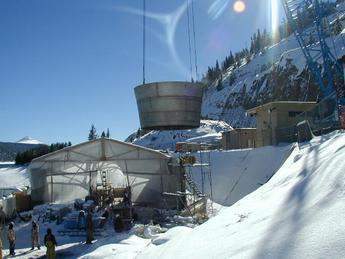 NOT long after the Dillon dam spillway was completed in 1962, the structure began experiencing damage to its tunnel shaft. At over 2.7km above sea level, the freeze and thaw cycles during harsh Colorado, US, winters caused concrete deterioration that created concerns over dam safety and maintenance, although the structural integrity of the dam was maintained.

The Denver Water Department monitored the condition of the spillway and made minor repairs as needed. Poor access and other operational constraints made major reconstruction difficult. However, an inspection of the spillway shaft in October 2000 found that conditions had become more critical. There was evidence of seepage and distress in the concrete, and the lining had become thinner as a result of freeze-thaw damage. Normally 30.5cm deep, some sections had deteriorated to depths of 15.2cm, creating dam safety and maintenance concerns.

Located around 112km west of Denver, Dillon dam contains Dillon reservoir, the largest water storage facility in the Denver Water system and a vital multipurpose resource in the Upper Colorado river basin. The project diverts water from the Blue river through the Harold D. Roberts tunnel, under the Continental Divide, and into the South Platte river basin and the Denver metropolitan area. It also serves as a scenic recreation area, offering boating, fishing, and a network of shoreline trails and campgrounds.

Dillon dam is a 1795m-long, 70m-high earthfill structure with over 313Mm3 of storage. The spillway is located near the left abutment of the main dam. A 4.6m-diameter vertical shaft connects to a 5.5m-diameter horizontal outlet leading to the Blue river. The dam is also a source of hydroelectric power, provided by a 1.8MW facility constructed in 1985.

In the spring of 2002, record drought conditions in Colorado offered Denver Water a unique rehabilitation opportunity. The extremely low level of reservoir water made it possible to repair the damage without sacrificing any water or forfeiting recreational benefits. Every indication was that there was little likelihood of overflow into the shaft during construction. Timing, however, was critical. The reservoir had to be available the following spring to safely store the runoff from the snows of winter. That meant that design, regulatory permitting, and construction had to be completed within seven months.

URS was retained to provide fast-track engineering and construction services to renovate the spillway shaft. The URS team consisted of a group of nationally recognised experts in tunnel construction, spillway design, grouting, and steel liner design and construction. Designers elected to resolve the problem by using a stainless steel liner rather than the more conventional reinforced concrete lining.

The 2.5cm steel liner would be somewhat more costly initially, but it offered several important advantages. It would speed up construction, reduce the risk of schedule and cost overruns, and eliminate long-term safety and maintenance concerns. A reinforced concrete liner design would have required excavation of the existing concrete to high-quality concrete or rock for placement of the new concrete. An extensive grouting programme to prevent leakage into the tunnel would also have been necessary, since leakage could prevent the new concrete from bonding to the existing concrete and possibly reduce the strength of the new concrete.

Risks associated with the concrete liner design included delay of the construction programme due to the grouting operation and the possibility of quantity and cost overruns associated with over-excavation of existing concrete or additional grouting.

The stainless steel liner was designed to resist the entire hydrostatic load of the reservoir without depending upon existing concrete liner. In addition, the grout backfill behind the liner did not require bonding to the existing concrete; therefore, an extensive grouting programme to stop infiltration from the reservoir would not be required.

The short construction schedule required that the stainless steel liner be purchased, manufactured and installed in segments while other segments were being manufactured. Sectional ‘cans,’ each composed of 2.5cm-thick, cylindrical steel sections up to 6.7m in diameter, had to mate perfectly within the tunnel shaft, as much as 45.7m down the shaft, as they were installed. The required fabrication tolerance between mating diameters was no more than 0.3cm to section.

Keeping deviations in diameter tolerances to a minimum made it possible for the pieces to fit properly for welding inside the shaft. The new lining had to have the same inside diameter as the old concrete, so as not to reduce capacity. As a result, little clearance remained between the steel liner and the shaft, creating a new challenge for the project team. Lasers were used to keep each cylinder perfectly straight during installation.

After removing 10.2–15.2cm of damaged concrete, a 30.5cm-high base ring and a 1.2m-high reinforcing ring were used to anchor the bottom of the liner. A 275t crawler crane positioned above the spillway inserted the sections in the shaft. Scaffolding and an elevator installed in the shaft permitted welding and backfill grouting and other tasks to proceed simultaneously. (See images above, left and right.) The elevator was also used to transport the deteriorated concrete as it was removed from the shaft.

Environmental concerns were also central to the project. The reservoir, located in the heart of Summit County, is a recreational haven with an extensive shoreline, including campgrounds, a network of bicycle paths and hiking trails. Downstream of Dillon reservoir, the Blue river has been designated a Gold Medal Trout Fishery by the Colorado Department of Wildlife, and water released from the reservoir maintains cool, steady flows into the river. It was essential therefore to prevent construction debris from reaching the river, a prospect that could have shut down the entire project.

A structural platform, anchored to the concrete walls, was set up at the bottom of the tunnel to catch construction debris and chipped-away concrete, to ensure none entered the river. The vertical scaffold that reached to the crest of the spillway also contained intermediate platforms. Using the elevator, captured debris was then removed from the spillway.

Careful planning, efficiency, and close coordination between Denver Water, the designers, contractors and the construction engineer were critical to the timely completion of the project. In addition to the design and construction obstacles posed by the project, work crews were hampered by three snowstorms, one of which deposited more than 30.5cm of snow on the work site.

The project was however completed two weeks ahead of schedule without disruption to hydroelectric operations or environmental intrusion. The stainless steel solution addressed Dillon dam’s existing concerns regarding safety and maintenance, and also ensured there would not be issues in the future.