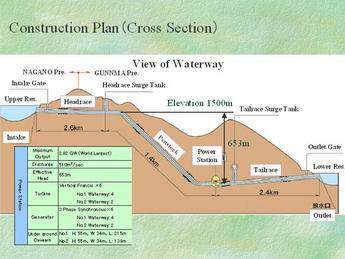 Kannagawa pumped storage plant is being built by Tokyo Electric Power Company over two prefectures and two river systems. The project involves construction of an upper dam at the uppermost reach of the Minami Aikigawa river on the Shinano river system in the eastern part of Nagano Prefecture (a 136m high rockfill dam with earth centre core) and a lower dam at the uppermost reach of the Kannagawa river on the Tone river system in the southwestern part of Gunma Prefecture (a concrete gravity dam 120m high). The dams will hold back the upper and lower regulating reservoirs, which are to be connected with 6km long water tunnels. A maximum power output of 2820MW (6 x 470MW) will be generated at maximum discharge of 510m3/sec using the effective head of 653m. Two underground power plant caverns are to be constructed to accommodate units No. 1 to 4 and No. 5 and 6; the first is named the Waterway System No. 1 and is almost complete, with construction of the other (Waterway System No. 2) to start at a later date.

Geological surveys of the project site started in April 1992 to investigate the feasibility of constructing a pumped storage plant. A survey station was established in July 1993, with construction starting in May 1997. Unit No. 1 (470MW) began operating in December 2005, while unit No 2 will start operating in July 2010 and Units 3 to 6 on and after 2015.

Geology of the kannagawa river

The soil at the site consists of a band structure of the southern Chichibu belt of the Paleo-Mesozoic Era spreading east to west, in which allochthonous gravels and olistoliths of sand stone, chert, basic tuff, basalt, and lime are mixed in the substrate of mudstone. The olitholiths are allochtonous rock masses that accumulated in the Paleozoic and Mesozoic Eras before the Jurassic Period, when the substrate mudstone accumulated and formed the mixed rocks. The Paleo-Mesozoic Chichibu layer is one of the oldest strata in Japan (formed 200 to 300M years ago) and is very stable, compact, and firm.

Characteristics of the principal facilities

As mentioned, the upper dam is a rockfill dam with earth centre core. The dam is 136m high, with a crest length of 444m and a dam volume of 7.3Mm3. This type of dam was chosen because of the topography of the dam site, the properties of the foundation bedrock, and the availability of dam materials near the site.

The materials used for the upper dam – with the exception of the materials for the earth centre core (840,000m3) – were almost entirely collected from the quarry near the dam site, which was to be submerged under the regulating reservoir. The core was built using debris flow deposit found in the lower reaches of the dam site. These materials had natural water content larger than the required level with which compaction is easy. To ensure impermeability, the water content was reduced by mixing rocks of low water content, and the required quality was obtained. The rocks of low water content were weathered rocks found in the site where the reservoir was to be constructed and were initially scheduled to be disposed of but were effectively utilised instead.

The spillway has a design flood discharge of 280m3/sec, and consists of an intake of the side-overflow type, a training dyke of the channel type, and a horizontal apron of the hydraulic jump type to dissipate energy. Since the upper and lower dams were to be constructed on two different river systems, a water channel with a discharge capacity of 0.44m3/sec (equivalent to 10-day discharge) was constructed around the reservoir to prevent rainwater that falls in the upper dam area from flowing into the reservoir, naturally discharging the water to the lower reaches.

The headrace and tailrace tunnels were excavated in a benching manner using the New Austrian Tunnelling Method. The lining was designed using a rock mass model in which the heterogeneity of the rock masses near the tunnels was considered, and executed using a curing method devised to control cracks. The grouting was designed to suit the rock cover, and was executed by occasionally revising and rationalising the grouting specifications based on the results of previous grouting.

To construct the inclined tunnel section of 48°, which is about 1000m long, a full-face tunnel boring machine (TBM) with a diameter of 6.6m was used for the first time in Japan to execute excavation work. The TBM has a total length of about 50m and a total weight of 600t. It is equipped with motors and jacks that can excavate even through soft ground with a device to control sliding, and can perform exploratory boring to survey the soil 30m ahead. The full face TBM enabled tunnels of the required diameters to be excavated in one process, reducing both the construction period and costs.

The penstocks were manufactured using high tensile strength steel (HT-100) to reduce the cost of materials.

The power station was designed so that the entire cavern is accommodated within firm bed, with a sufficient rock cover ensured. The water tunnels connecting the caverns and the inlet and outlets also need to be the shortest length possible.

An observational construction management system has been introduced for the cavern excavation. The system monitors the behaviour of the peripheral bedrocks during each bench excavation, processes the data, compares the monitored and estimated displacements of the rocks, loads of penstock works etc., helps select the most appropriate support patterns in real time, and enables rationalised supports to be constructed.

Use of new type of runner

To reduce the construction cost of the pumped storage project, both the effective head and the outputs of the generators needed to be increased. Large-capacity turbines and generators for effective heads as large as 700m, which have proven reliable in a number of other hydro schemes, were chosen for the project. However, a new type of runner was developed for the scheme’s turbines. The developed runners are equipped with an increased number of blades to improve efficiency – instead of the conventional seven blades of equal length, 10 blades consisting of five short and five long blades were used.

This ‘splitter runner’ is a multi-blade pump turbine that was jointly developed by TEPCO and Toshiba Corp. With the introduction of this runner, Kannagawa hydro plant increased its power generation and pumping operation efficiency by about 4% and the power generation capacity per pump-turbine has increased by 20MW from the original plant to 470MW

As mentioned earlier, the lower dam is a 120m high concrete gravity dam, with a crest length of 350m, and a dam volume of 720,000m3. The dam has a ridge in the middle, giving the impression of two connected dams. The part on the left bank is called the main dam, and the right bank side is called the side dam.

The lower dam was constructed as a concrete gravity type because the site formed a steep V-shaped valley; the foundation bedrock is firm in general, and aggregates for concrete are available from a quarry immediately upstream of the site and from the muck from underground caverns and tailraces.

To speed construction time, the RCC method was used to construct the dam, using dozers and vibrating rollers to place concrete. The mix proportion of the concrete – chosen after laboratory and in-situ execution tests – was 100kg of cement and fly ash per 1m3 of concrete, which is the smallest amount used in Japan. Rocks produced from excavation of the caverns and tunnels were effectively utilised as aggregates.

The majority of the construction site is located within national and privately-owned protected forests. Although the area is not in a conservation area or a national park, measures to protect the environment have been taken during the project’s construction stages. The ISO14001 Environment Management System accreditation was obtained in November 1999 to ensure thorough execution of the environment control measures, which have been constantly improved.

Construction roads were built on existing roads as much as possible by expanding the width and excavating tunnels to minimise the affected ground surface area.

To control pollution of the river water, temporary drains were constructed to isolate waste water produced in the work site. Water from the upper reaches is discharged directly to the lower reaches. Sewage from workers is purified in combined treatment tanks installed to each lodge, and the quality of treated water is checked based on original strict standards.

The construction of all facilities except Waterway System No. 2 and the peripheral environment has been completed and both the upper and lower dams have been filled. Performances and qualities of the completed facilities were tested and checked using the maximum water pressure. Operation of the first unit began in December 2005.