Solar PV has its day in the sun

The IEA’s latest 5-year forecasts indicate that almost 165 GW of renewables generation capacity came on line in 2016, largely as a result of booming solar PV deployment around the world, driven by sharp cost reductions and policy support. Staff report 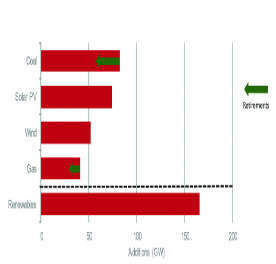 The 165 GW of renewables capacity that came on line in 2016 was a new record, largely due to a very strong solar PV market, especially in China, according to the International Energy Agency’s just-published analysis and forcast, Renewables 2017. Renewables accounted for almost two-thirds of net new power capacity worldwide, and was marked out by booming solar PV deployment around the world, driven by significant cost reductions and policy support. Last year, new solar PV capacity grew by 50% globally, reaching over 74 GW, with China accounting for almost half of this expansion. For the first time, solar PV additions rose faster than any other fuel, exceeding the net growth in coal.

This deployment was accompanied by the announcement of record-low auction prices as low as 3 cents per kWh, recorded in a variety of places, including India, the United Arab Emirates, Mexico and Chile. These contract prices for solar PV and wind power purchase agreements are increasingly comparable with or lower than the generation cost of newly built gas and coal power plants.

A new age of the sun

This record performance in 2016 forms the bedrock of the IEA’s electricity forecast, which sees continued strong growth through to 2022, with renewable electricity capacity forecast to expand by over 920 GW, an increase of 43%. This year’s renewable forecast is 12% higher than last year, thanks mostly to solar PV upward revisions in China and India.

For the next five years, solar PV will provide the largest annual capacity additions for renewables, well above wind and hydro. This marks a turning point and underpins the IEA’s more optimistic solar PV forecast which is revised up by over one-third compared to last year’s report. This revision is driven by continuous technology cost reductions and unprecedented market dynamics in China as a consequence of policy changes. Under its accelerated case – where government policy lifts barriers to growth – IEA analysis finds that renewable capacity growth could be boosted by another 30%, totalling an extra 1150 GW by 2022, and led by China.

Three countries will account for two thirds of global renewable expansion to 2022, China, the USA and India. China is the undisputed renewable growth leader, responsible for over 40% of global renewable capacity growth, largely driven by concerns about air pollution and capacity targets that were outlined in the country’s 13th five-year plan to 2020. In fact, China has already exceeded its 2020 solar PV target, and is likely to exceed its wind target in 2019.

Despite policy uncertainty, the United States remains the second- largest growth market for renewables. The main drivers remain strong for new onshore wind and solar – multi-year federal tax incentives combined with renewable portfolio standards as well as state-level policies for distributed solar PV. But the current uncertainty over proposed federal tax reforms, international trade, and energy policies could have implications for the relative economics of renewables and alter their expansion over the forecast period.

India’s moves to address the financial health of its utilities and tackle grid-integration issues drive a more optimistic forecast. India is expected to more than double its current renewable electricity capacity by 2022, a higher growth rate than the EU. Solar PV and wind together represent 90% of India’s capacity growth. Auctions yielded some of the world’s lowest prices for both technologies.

In the European Union, renewable growth over the forecast period is 40% lower compared with the previous five-year period. Overall, weaker electricity demand, overcapacity, and limited visibility on some forthcoming auction capacity volumes remain as challenges to renewable growth. Policy uncertainty beyond 2020 remains high.

Although this growth represents a small share of total PV capacity in both regions, its socio-economic impact is nonetheless significant. Over the next five years, SHSs – the most dynamic sector in the off-grid segment – are forecast to bring basic electricity services to almost 70 million more people in Asia and sub Saharan Africa.

Wind and solar together will represent more than 80% of global renewable capacity growth in the next five years. By 2022, Denmark is expected to be the world leader, with 70% of its electricity generation coming from variable renewables.

In some European countries (Ireland, Germany and the UK), the share of wind and solar in total generation will exceed 25%. In China, India and Brazil, the share is expected to double to over 10% in just five years. But without a simultaneous increase in system flexibility (grid reinforcement and interconnections, storage, demand-side response and other flexible supply), variable renewables are more exposed to the risk of losing system value at increasing shares of market penetration, since wholesale prices are depressed precisely when wind and solar production exceeds demand.

In the next five years, growth in renewable generation will be twice as large as that of gas and coal combined. While coal remains the largest source of electricity generation in 2022, renewables halve their gap with coal, down to 17% in 2022. Renewables policies in many countries are moving from government-set tariffs to competitive auctions with long-term power purchase agreements for utility-scale projects. Increased competition has allowed reducing remuneration levels for solar PV and wind projects by 30-40% in just two years in some key countries such as India, Germany and Turkey.

Asia leads this growth due to the rising demand for transport fuel, the availability of feedstocks, and supportive government policies. Brazil makes a key contribution as a result of its efforts to increase sustainable biofuels consumption in line with its national target for 2030. In the USA, ethanol and biodiesel production also expands as a result of supportive policy frameworks. Modest growth is expected in the European Union given that the policy landscape after 2020 is not expected to encourage industry investment.

Heat used for water and space heating in buildings and for industrial processes represents almost 40% of global energy-related CO2 emissions, so decarbonising heat remains an important challenge. But the share of renewables in heat consumption will increase only slowly, from 9% in 2015 to almost 11% in 2022. The fastest growth will be seen in China, the European Union and North America.