Solar plus storage – what is the best combination?

Under the Thermvolt study extensive research was carried out to determine the benefits of combining storage-coupled solar thermal and photovoltaic power plants. Its first results have now been published. Staff report 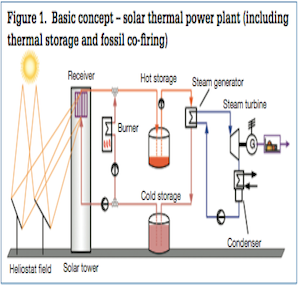 The Thermvolt study focused on the efficiency of solar technologies and the security of power supply. It was carried out between November 2014 and July 2016 by a partnership of M+W Group, the DLR Institutes for Solar Research and Technical Thermodynamics, the Lappeenranta University of Technology (Finland), and Fichtner GmbH & Co KG, and was financed in the main by a grant of €500,000 from the German Federal Ministry for Economic Affairs and Energy, BMWi. It was an engineering, economic and environmental comparison of combinations of solar thermal (CSP) and photovoltaic (PV) power plants with fossil fuel back-up and a battery storage facility. The initial results of the study were presented at the SolarPACES Conference in Abu Dhabi in October. The final report is expected to be submitted by the end of 2016.

In principle hybrid PV-battery-gas turbine (PVBGT) power plants have the same capability as CSP in terms of flexibility of power generation depending on demand. They use a battery and a fossil fuelled back-up (for example a gas turbine) and may be operated as an interconnected system or as a virtual power plant.

The Thermvolt study set out to deliver a cost comparison of a variety of PV-based and CSP-based power plant concepts and their combinations under the same boundary conditions – they must be able to follow a given load profile and should decrease greenhouse gas emissions (CO2 equivalent) at lowest cost. The aim was to examine how these plants could be developed to generate electricity in the best combinaion of affordability and low environmental impact.

The CSP power plants investigated consisted of thermal energy storage combined with a fossil fuel burner which was used as necessary and linked to specific emissions limits. The PV combined power plants had a battery storage facility and a fossil reserve system with which they could be operated in a network.

Manfred Engelhard, technology manager for Energy at M+W Group, commented, “The key challenge for achieving an increasing proportion of renewably generated electricity in the grid is related to the availability of effective and affordable storage solutions. [The] … fluctuation of ‘feed-in’ … rises as the proportion of solar energy increases in the grid. Electricity storage systems in the form of large, stationary battery storage banks along with PV systems demonstrate a high potential for reducing costs.”

Reference systems for all technologies were modelled in commercial or validated simulation tools and used as reference systems for validation of a common tool for the yield analysis (INSEL) applied for this study. During the yield calculation on an annual basis the sizes of solar fields and different storage capacities were optimised for each variant. To predict the cost development of the technologies, a model based on learning rates was applied. Other common boundary conditions included a plant size of 100 MWe, fuel cost, and a knowledge of permitted CO2 emissions. Finally an economic model was used to calculate the LCOE of all variants, including effects like degradation and different cost sensitivities.

The ‘experience curve’ approach was chosen for capex projections, while a literature review provided the basis for the scenario assumptions. Three scenarios were developed and capex numbers for all relevant components were derived on assumed future capacities, market growth and learning rates of CSP, PV and batteries.

Figures 5 – 6 and Table 2 show a digest of the LCOE vs emissions conclusions, and Figure 7 the cost sensitivity results for the case of a Morocco typical day. The results of the study indicate that currently a combination of CSP and PV is more cost-effective in most scenarios than the use of only one of the two technologies. The PV section supplies electricity directly to the grid during the day, while the solar thermal storage facility provides the capability to feed this energy into the grid as electricity during the night.

On account of the current high level of costs for battery storage, PV- battery combined power plants are currently subject to the highest electricity generation costs. However, under favourable conditions these costs are likely to approximate to the generation costs of solar thermal power plants with thermal storage by the year 2030.

All three base concepts (CSP, hybrid PV-battery and their combinations) can contribute to the supply certainty of the grid, depending on the demand curve. Within the set boundary conditions the analysis showed that a combination of CSP and PV plant is in many cases the most cost effective solution, able to deliver direct PV power during the day, while CSP delivers stored power at night.

While in 2015 the PV-battery systems were more expensive owing to the high storage cost, they can become competitive by 2030. This is strongly dependent on the load conditions and the required need to decrease CO2-equivalent GHG emissions.

Where there is a night time load (for example in Saudi Arabia) by 2030 the LCOEs for all concepts are very similar. For load profiles requiring most of the load during the day (for example, Morocco) hybrid PV-battery power plants can somewhat lower the LCOE.

In 2030 for all technologies the lowest LCOEs are achieved by configurations with very low specific CO2 emissions. But the report emphasised that it is important to keep in mind the assumptions and the boundary conditions of the analysis – a fixed load curve that has to be fulfilled at any time – and the assumed market growth of the technologies. CSP and batteries will only benefit from reductions in cost if the assumed capacity is installed by 2030.