Data from a new self-organising network of wireless transmitters at E.On’s Kingsnorth power plant in the UK are helping pinpoint its water usage. 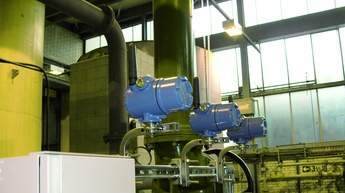 E.On is using wireless technology to accurately monitor and measure treated water usage at the dual fired (coal and oil) Kingsnorth power station, allowing trending and analysis to be carried out and the formulation of target values.

The self-organising wireless network delivers the data for trending in an OSIsoft PI historian which helps personnel monitor water usage within the system.

The E.On station, a 1940 MW facility located on the Medway Estuary in Kent, UK, needed a way of monitoring and measuring water usage. It was decided to install new non-intrusive ultrasonic flow meters to carry out this task.

The high cost of wiring associated with a conventional cabled solution was a key factor in E.On’s decision evaluate wireless technologies.

Having initially undertaken extensive trials of Emerson’s Smart Wireless technology, E.On selected the technology because it offered high levels of reliability and long transmitting distance, as well as the ability to add additional devices to the network without the need for additional infrastructure.

The turbine hall at Kingsnorth is around 500 m long and presents a difficult working environment for wireless as it houses large turbines, vast amounts of metal piping and a number of metal walkways that could interfere with the wireless signal. Such an environment would not be suitable for a line of sight wireless solution, but the Smart Wireless self-organising technology encountered no problems in terms of routing data back to the gateway or reliability of connection.

“We have great confidence in the technology. The self-organising network provides redundant routes for the data to pass back to the gateway. The resulting wireless mesh network delivers high reliability, “said Simon Lark, C&I engineer, E.On UK.

Thanks to the self-organising technology, each wireless device can act as a router for other nearby devices, passing messages along until they reach their destination.

If there is an obstruction, transmissions are simply re-routed along the network until a clear path to the Smart Wireless Gateway is found.

As conditions change or new obstacles are encountered in a plant, such as temporary scaffolding, new equipment, or a parked lorry, these wireless networks simply reorganise and find a way to get their signals through. All of this happens automatically, without any involvement by the user.

“We were initially a little sceptical of the claims made for wireless especially considering the environment we would be placing it in. But installation was quick and easy and we just switched them on and they all worked,” said Simon Lark.

Fourteen Rosemount wireless transmitters have been installed to provide access to flow percentage readings from the new non-intrusive ultrasonic flow meters monitoring different sections of the turbine hall. The Rosemount wireless transmitters send flow measurement data every fifteen seconds to an Emerson Smart Wireless Gateway, situated in the main administration building on the other side of the road from the turbine hall.

“The gateway is situated in a windowless room within the main building. Despite being totally surrounded by brick walls, when switched on the wireless transmitters were all clearly visible and immediately connected to the gateway,” said Simon Lark.

Using Ethernet the data are sent from the gateway to predictive maintenance software (Emerson AMS Suite), which manages the wireless transmitters, and uses its OPC server to import the flow data into the PI data historian. From here operators view trends and pinpoint where any loss of flow takes place.

The fourteen transmitters took around two hours to configure and then less than six hours to fully install within the plant. In contrast a wired solution would have taken between one and two weeks to complete.

“This initial installation of wireless is providing us with valuable experience,” said Chet Mistry, Team Leader, E.On UK. “We are now hoping to be able to use this experience to apply the technology to a range of applications including accessing valve diagnostic information.”