A small hydro scheme is being developed in Bekhal, northern Iraq, utilizing the abundant spring water found in the area 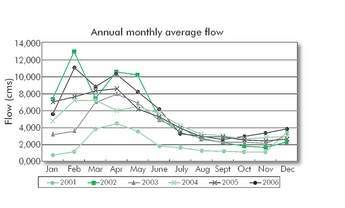 As part of the reconstruction work on infrastructure damaged by war in Iraq, the Ministry of Energy (MOE) of the Kurdistan Regional Government (KRG) requested assistance from the Korean government to develop a hydro power project in the country.

K-water, a state-owned enterprise primarily established as a national water resources organization in Korea, conducted a preliminary feasibility study in the Bekhal area of Northern Iraq and confirmed that abundant spring water combined with favourable topographical conditions meant the development of a small hydro scheme was economically viable.

Despite dangerous local conditions, from July to November 2007 K-water and Dongshin Co executed detailed design for a small hydro scheme. Sammi Co of Korea was contracted to undertake construction, with work scheduled to finish in July this year.

With a population of 1.5M, the Northern Iraq state of Erbil requires 430MW of power to ensure uninterrupted power supply. However, there is currently only 29MW of power being produced by power plants in the area, with a further 160MW being supplied intermittently from the national grid. Importantly, some of the surrounding areas of Erbil city have not been connected to the national grid, and some villages are only being served by independent power sources such as diesel generators.

The new small hydro power plant is being built in Bekhal, 100km from Erbil City in the Kurdistan Region. The project area is adjacent to Zagros mountains which rise 2400m above sea level. Annual rainfall in the area lies anywhere in the region of 375 to 724mm, and, as a semi-arid continental climate, it usually has hot and dry weather in summer, and cold and wet weather in winter. This project area, one of few tourist resorts in Erbil, is famous for its springs and topographically beautiful scenery. Soran substation, together with a 11kV distribution line, serves the project area – although regular power failures occur due to the overloads.

An unusual feature of this project is that it will use water flowing from a rock bed in a canyon, rather than using stream or reservoir water.

For a reliable estimation of flow, 20-30 years worth of hydrologic data is recommended. Unfortunately there was not enough data for this project area. Instead, the flow out of Bekhal spring was estimated by analyzing monthly mean flow based on available daily flow data investigated during a UNDP feasibility study, and monthly flow data surveyed by the Ministry of Water Resources from 2001 to May 2007.

The flow out of Bekhal spring was found to be linked to the rainfall in the project site, with the rainfall influencing the flow after one month. The wet season in the area is from January to June, and the dry season is from July to December. Flow increases from December to May and decreases from June to November.

The flow duration analysis found that the normal flow is 3.54m3/sec, with the discharge for generation determined to 2.5m3/sec. The water supply capacity to the Soran area is 0.7m3/sec and environmental flow is 0.3m3/sec.

All structures for the scheme had to be designed to ensure they did not negatively impact the surrounding environment. The main structures consist of: intake facility, sedimentation basin and forebay, penstock, access road, bridge, powerhouse and transmission line. The forebay in particular was designed to create attractive waterfalls to fit in with the tourist resort, while the penstock is being installed under the access road. Full details can be found in Table 1.

Construction work on the project began in March 2008. The access road, forebay, powerhouse, bridge and penstock works are in progress, with a majority of the work completed so far. The project is scheduled for completion in July 2009 .

Successful completion of this project is expected to create a more stable electric power service in the area, while helping to invigorate tourism and promoting the relationship between Korea and Iraq.