The prototype of the Siemens' H, the world's largest fully air cooled gas turbine – and arguably the largest gas turbine ever built, of any type – is now at E.On's Irsching site and in the process of being installed. 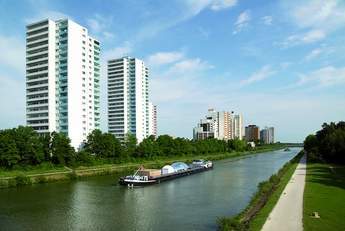 H prototype at Erlangen on its way to Irsching

First firing of the 340 MW SGT5-8000H is scheduled for this winter, the culmination of a development effort that started about seven years ago.

Customer demand and market requirements were the essential drivers for the development of the new machine, says Siemens, which aims to fulfil the following requirements:

• combined cycle net efficiency of over 60%;

Siemens Power Generation started its internal product development process in 2000 with strategic product planning activities. In 2005 the company announced it was developing the world’s most powerful gas turbine. Two years later, and on schedule, the prototype of the SGT5-8000H was shipped to its destination, the Irsching 4 gas turbine power plant.

With the acquisition of the Alstom industrial turbine business the Siemens range goes down to 5 MWe, while the new H raises the upper limit from 287 MW (the SGT5-4000F) to the aforementioned 340 MW.

The H is the result of an intensive research & development programme aimed at developing a competitive, efficient and flexible fully-air-cooled engine.

It is the first new frame developed since the merger of Siemens and Westinghouse, and aims to combine the best features of both companies’ existing product lines with advanced technology. Proven design features have been applied wherever possible and use has also been made of Six Sigma processes.

Cutaway of the H

The new machine has been developed by a 250 strong team located in a number of locations, in particular Erlangen, Berlin and Mülheim in Germany and Orlando and Jupiter in Florida, USA.

An additional 500 Siemens employees were involved in the manufacturing and preparation of the prototype engine for testing and at present about 800 people are working on the prototype design and erection at Irsching.

Basic data for the new turbine can be summarised as follows:

Back in 1992, Siemens’ Killingholme combined cycle plant achieved an efficiency of 52%. Didcot, with one of the first V94.3A machines (predecessor of the SGT5-4000F), achieved 56% in 1996 and the Mainz-Wiesbaden combined cycle plant, with the latest version of the SGT5-4000F, reached an efficiency world record of more than 58% in 2001. Irsching will break the 60% barrier.

The SGT5-8000H gas turbine will be the prime mover of the new Siemens combined cycle offering for the 50 Hz market, the SCC5-8000H, which will have an output of over 530 MW.

Key features of the new turbine are:

• direct scaling for further frames, eg for a 60 Hz machine.

Features contributing to higher efficiency include:

• advanced materials to increase the firing and exhaust gas temperatures;

Features expected to contribute to low life cycle costs include:

• the high, ie over 60%, efficiency in combined cycle mode;

• low maintenance and operation costs due to less complexity in engine and parts; and

Features that aim to increase operating flexibility include:

• 100 per cent air-cooling, which means that the cooling system is always operational, whatever the speed and load (even in open cycle operation); and

• flexibility in operation, reduced start-up times and high ramp rates due to reduced complexity in the engine and plant.

Siemens has not yet disclosed the firing temperature of the new turbine, but Phil Ratliff of Siemens said recently: “I’ll describe it as a 1600 degree C machine, only slightly hotter than the 501G.”

The product development process consists of several review steps and five release gates taken up by senior management and in some cases even up to the board level. In total, about 550 design reviews have been performed on components, systems and the total cycle, and more than 60 man years in total invested in additional quality steps and activities such as QFD (quality function deployment and Six Sigma.

To minimise risks during the introduction of the new machine, complete component prototype tests have been carried out, with all key gas turbine components pre-validated in subsystem tests, for example:

• extensive material and component testing under real conditions in the field as well as in test rigs in the very early stages;

• compressor tests in 2005 at the Siemens test bed in Berlin to prove the new compressor profiles in various off design conditions; and

The results of tests so far suggest that the actual performance of the gas turbine will meet or exceed expectations.

As part of the prototype testing at Irsching 4, more than 3000 measurement points will be used to help validate performance and integrity as well as optimise turbine operation.

Through the hosting arrangement with E.On, the prototype will be initially extensively tested in simple cycle mode under real grid conditions. This will be at the customer site but the gas turbine will be in Siemens ownership.

The aim is to ensure that subsequent commercial product lines will be introduced to the market with an adequate testing history and commercial release will occur only after successful completion of the prototype testing, maximising reliability and reducing risks to customers.

After start-up, part-load and baseload validation operation of the plant, a comprehensive endurance testing phase will be conducted. With this extended testing phase, the overall validation programme will take about 18 months.

The initial phase of Irsching 4 will be constructed in a special single cycle configuration, designed to facilitate its subsequent conversion to combined cycle single shaft.

The single cycle prototype test plant will be equipped with the following components, in addition to the SGT5-8000H machine:

• control centre for testing; and

The new machine at Irsching

Manufacture of the prototype SGT5-8000H gas turbine was completed late in April 2007 at the Siemens gas turbine plant in Berlin.

Transport to the Irsching site, near Ingolstadt, Germany, took four weeks. The route from Westhafen Berlin was as follows: Havel river – Elbe–Havel canal – Mittellandkanal (Münster, Duisburg, Köln, Koblenz) – Main river (Frankfurt) – Rhein–Main–Donau canal (Bamberg, Erlangen, Nürnberg) – Danube to Kelheim. From there, for the last 37 km to the Irsching site, it was transported by road.

Following arrival at site, the gas turbine, the generator and the main transformer were then positioned on their foundations and installation work commenced.

The first firing of the engine is planned for December 2007, with completion of the test phase targeted for mid 2009.

Irsching 4 is envisaged as a two-phase project. With the successful completion of the gas turbine test phase, ownership of the plant will be transferred to the customer, E.On Kraftwerke. The plan is to then convert the simple cycle prototype test plant to a high efficiency combined cycle plant, with the heavily instrumented gas turbine rebuilt as a commercial engine.

Siemens sees the high efficiency as the major benefit to the customer. Efficiency not only pays an important role with respect to environmental impacts, but also in terms of the profitability of the power plant. As fuel is the largest single cost item for running a power plant, an increase of two percentage points can save the operator millions of euros over the entire life cycle of a combined cycle power plant with a capacity of 530 MW.

The gas turbine will initially target the 50 Hz markets of Asia and Europe. At the outset the engine is being developed for use with natural gas and fuel oil, but operation will be expanded to also include special fuel needed for applications such as IGCC.

A geometrically scaled 60Hz version (SGT6-8000H) will be released after the 50Hz engine verification.