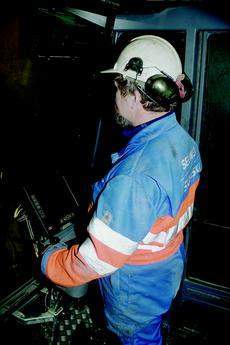 Norwegian contractor Selmer Skanska has completed its part of the construction of the replacement for the 1940s hydro power station serving the Årdal aluminium smelter, located near Sogndal in western Norway.

Overall cost of the project will be approximately US$223M, with the Selmer Skanska contract accounting for US$74.4M. The new power station has been excavated in rock, together with nearly 21km of associated tunnels of various cross sections.

The client, Norsk Hydro, is committed to preservation, and this is reflected both inside and outside the mountain, and includes health, environment and safety. This was emphasised when they awarded the contract, along with an insistence that their current daily production of electricity should not be disrupted.

Three generations of Atlas Copco drillrigs were used at Tyin, ranging from the older Boomer H 185 and 322, through to the Rocket Boomer 353 C, to the latest L2 C and fully computerized WL3 C, equipped with the new 1838 HF rockdrills. Secoroc supplied its Magnum SR 35 rock tools for the drillrigs, and Atlas Copco Robbins refurbished a 97RL C raise borer for the surge shaft excavation. An Atlas Copco Wagner ST1000 Scooptram was also used.

The tunnel system for the project runs from a laketap intake in Lake Tyin to the existing storage lake at Torolmen, and then on to the power station penstocks and turbines, finally discharging through a tailrace at Årdalsvatnet.

Five surface creek intakes have also been constructed. These are being coupled to the existing power tunnel, which will then work as a top feed to the new tunnel, connected by a shaft located approximately halfway along its alignment. Selmer Skanska subsidiary E-Service has drilled the 1m diameter x 25-50m long holes to connect the creeks to the existing headrace.

An access tunnel 1.54km long with 50m2 cross section was driven downgrade at 1:10 to reach the power station site in June, 2002. The rock cover of 1.5km is resulting in heavy pressure on tunnel face and crown.

The power station excavation was completed in October, 2003, with dimensions 17m wide x 60m long x 38m high, beneath 1.6km of rock cover. It is designed to replace output from the existing plant and to add an extra 15%, bringing electricity production to 1400GWh annually, without changing the water reservoirs.

An Atlas Copco ROC 642HP quarry rig drilled 4m long x 64mm diameter vertical blastholes with 2.5m burden on the benches for bulk excavation of the power house, where the generator pit will house two Pelton turbines. These will be driven by the hydrodynamic forces created by over 1000m of head between Lake Tyin and the power house. Massive crane rails have been installed to cope with the turbine components and the 240t transformers.

Some 7000m3 of concrete foundations had been poured for the new power station by January 2004 and electrical and mechanical installation commenced.

The tailrace tunnel is 2.7km long, and 9.5m high x 5.5m wide, with 46m2 section. This was driven by a new Atlas Copco Rocket Boomer WL3 C drillrig with three booms and a basket, delivered in February 2002. The WL3 C is equipped with the latest 1838 HF rockdrills, which drilled at 1.5m/min in the granite gneiss. It drilled 90 holes/round using 5.5m long rods and 48mm button bits with Secoroc Magnum SR35 thread, with blasting by Dyno Nobel slurry with Nonel detonators.

The rock cover of 1.5km resulted in heavy pressure on the mountain side of the drive, causing blocky ground which had to be secured using 4m long resin anchored bolts. Some 12-15 bolts were installed per round, in alternating rings of 6 and 7 at 2.5 m spacing. Where the rock tension permitted, 2.4m long bolts were used. Steel fibre reinforced shotcrete was applied as a matter of course.

Turning niches were excavated at 130m intervals for the wheeled loaders, which discharged into road tippers. Rock from the tailrace tunnel was carried by bottom dump barges to an area of the fjord that has been reclaimed as a nature reserve. The access and tailrace tunnel entrances are 3km apart along a tarmac all-weather public highway.

The pressure tunnel was advanced at 27m2 section on a 0.5% gradient from the power station position towards Lake Tyin.

Meantime, development of the 350m long Biskopsvatn adit was commenced in October 2001 at a point approximately halfway along the 7km alignment between the power station and the storage lake known as Torolmen. Biskopsvatn adit reached the pressure tunnel horizon by Christmas 2001.

From here, the pressure tunnel was advanced in both directions using two identical Atlas Copco 353 S drillrigs and tracked loaders with 2.1m3 side tipping buckets at each face, operated by single crews on each of two shifts. A maximum 35 rounds/week was achieved, with an average of 26 rounds, which equated to 65m advance.

Both rigs used Secoroc Magnum SR35 equipment, 5.5m long rods and 48mm button bits, in the 29-30m2 section, and each round took around two hours to drill.

A workshop was established underground at the junction of the Biskopsvatn adit and the pressure tunnel drives. Towards the right downgrade side, the drive was in granite, and towards the left upgrade side, it was in phyllite. Each round required more blastholes in the phyllite, together with up to six 102mm cut holes.

The final stretch of tunnel, from Lake Torolmen to the draw off point in Lake Tyin, was driven from an adit using an excavator loader and dumptrucks. The first 226m was downgrade, followed by 2.4km slightly upgrade at 20m2 section. The face was drilled using an Atlas Copco Rocket Boomer L2 C, using ANFO as the blasting agent.

At a position known as Tora Bora because of its remoteness, the 9000m3 surge chamber was excavated early in the project using an Atlas Copco 322 twin-boom drillrig and ANFO. Poor access limited the size of equipment that could be used, which included a Wagner ST1000 Scooptram.

The 436m long x 4.04m diameter surge shaft was raise bored from the surge chamber by Skanska Raise Boring AB using its Robbins 97RL C. This is a high power and low profile raise drill specially designed for working on sites with size and weight restrictions, and is one of the strongest ever produced for up to 600 m-long raises in the diameter range of 2.4m – 5m. The conversion of the 13 year-old machine to computer control was undertaken by Atlas Copco Rock Drills, who upgraded the entire system using RCS technology, and added a new power pack and electrical cabinet. The upgrade made the control system more reliable and easier to use, and the raise drill easier to assemble at site, because of the reduction in cabling. Technical data can be logged and downloaded onto a PC card, and the whole system is programmable, making it easier to add new features. A catch-rope feature was added and programmed into the machine after it had been delivered and set up. With this feature installed, if the reamer loosens, it is restrained by a wire rope inside the drillstring, and a red light appears on the panel.

Due to weight restrictions and size limits of the access road along the mountainside, the machine had to be dismantled and hauled in by tractor. It took Skanska nine trips to get the raise drill into place, and an additional 30-40 helicopter trips for transportation of drill rods and accessories. Site preparation and assembly took around three weeks.

During winter, it was impossible to keep the road open due to snowstorms, and the raise drilling crew had to rely on helicopter or snowmobiles for transportation. To avoid a cumbersome commuting situation, night-quarters were fitted in the warm and snow free tunnel, close to the working site.

Drilling of the 15in pilot hole started in December 2002 and took three months to complete. A drift from the power tunnel reached the lower level of the pilot hole by March, 2003, and reaming of the 4.04m diameter shaft commenced the following month and was completed by the end of June, 2003.