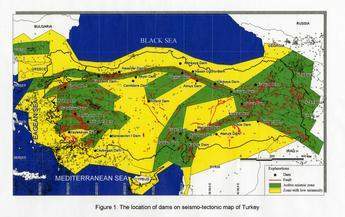 Turkey is one of the most seismically active regions in the world, a country where major earthquakes with the potential of threatening life and property occur frequently. In the last decade, over 50,000 residents have lost their lives, commonly as a result of building failures in seismic events. Significant structural damage has developed at a number of Turkish dams, but no failures have been reported.

The most well-known earthquake damage to an embankment dam in Turkey occurred during the 1986 Dogansehir earthquake (with Ms of 5.8). The epicenter of the earthquake was very close to the dam and the damages to the structure were a result of the strong motion of the nearby fault.

Since there are many dams under the influence of near-source zones in Turkey, meaningful seismic parameters are needed to perform a satisfactory evaluation of the dams. Discussed here are guidelines for the selection of parameters to be used in the seismic design, analysis and safety evaluation of dams, and the analyses performed for 30 large embankment dams located in different basins in Turkey. For dams with a head ranging from 70 to 166m, the seismic hazard rating of the dam site and the risk rating of the structures were determined and possible modes of failure were estimated.

• The seismic hazard rating of the dam site.

• The risk rating of the dam and appurtenant structures.

The risk rating of the dam can be based on the capacity of the reservoir, the height of the dam, the evacuation requirements and the potential downstream damages. In general, the seismic and risk ratings are evaluated separately (ICOLD, 1989). Recently, these two factors were combined to define the total risk factor for a dam structure (Bureau, 2003).

The type of dam is an important parameter impacting the total risk rating. ICOLD (1989) stated that safety concerns for embankment dams subjected to earthquakes involve either the loss of stability due to a loss of strength in the embankment or foundation materials or excessive deformations such as slumping, settlement, cracking and planar or rotational slope failures. To obtain preliminary information about seismic parameters of the dam materials, the simplified procedures can be used. If the materials used in the embankment are not susceptible to loss of strength and the hazard and risk ratings are low, the simplified analyses are entirely sufficient to define the seismic evaluation parameters. It is suggested that finite element methods be used for analysing embankment dams in the high risk or hazard class (ICOLD, 1989).

In Turkey, most dams are of the embankment type because of physical factors and economic reasons. It is a common thought that embankment dams, which are well compacted according to the specifications, are suitable in regions having high seismic activity. But in general, strong ground shaking can result in dam instability and strength loss of the foundations, and close active faults near dam sites can cause damaging deformation of the embankment. There are examples of dams in Turkey which were damaged during past earthquakes. (Tosun 2002).

The probabilistic seismic hazard analysis is widely used and considers uncertainties in size, location and the recurrence rate of earthquakes. Kramer (1996) states that this analysis provides a framework in which the uncertainties can be identified and combined in a rational manner to provide a more complete picture of the seismic hazard.

As a result of an extensive survey and a search of available literature, several sources have been identified to help analyse the seismic hazard of dams in Turkey (Yucemen, 1982; Erdik et al, 1985; Saroglu, 1992). The data about historical and 20th century instrumentally recorded earthquakes for Turkey and the surrounding vicinity, collected by the National Disaster Organisation, was considered as a basis for the seismic hazard analyses. The earthquakes that occurred within the last 100 years were used for estimating seismic parameters. Due to strong motion records being unavailable, various attenuation relationships were considered (Ambraseys, 1995; Campbell, 1981). Seismic hazard parameters were estimated by using the method developed by Gumbel and the Gutenberg-Richter methods (Boore and Joyner, 1982).

For all analyses, the peak ground acceleration (PGA) was determined by the maximum design earthquake (MDE) as defined by ICOLD (1989). The authors believe that seismic criteria and analysis parameters for dams should be selected more conservatively than for conventional structures since the failure consequences are more disastrous; the main requirement of an earthquake–resistant design is to protect public safety and property.

ICOLD (1989) states that the potential risk of dams consists of structural components, mainly based on the capacity of the reservoir and the height of dam, and social-economic components, which can be expressed by the evacuation requirement and potential downstream damage. The total risk factor is defined as a summation of risk factors for capacity, height, evacuation requirements and potential damage. Based on the total risk factor, four risk classes are defined as such: low, moderate, high or extreme. Risk classification of a dam provides more detailed information for the selection of seismic evaluation parameters and methods to be used for analysis. It should be noted that special considerations for safety are recommended for large dams having a height above 90m and a storage capacity greater than 1200hm3. A second method to quantify the safety of a dam defines total risk factors, which depend on the dam type, age, size, downstream risk potential and the dam’s vulnerability (Bureau and Ballentine, 2002). The Total Risk Factor (TRF) includes a downstream hazard factor, which has two different components. Bureau (2003) also suggests a simple classification chart for estimating the downstream hazard factor when it is difficult to obtain sensitive values of risk factors for downstream evacuation requirements and downstream damage, respectively.

For obtaining the seismic vulnerability of rating, a curve developed by Bureau and Ballentine (2002) is used. By using this curve, a predicted damage index (PDI) can be obtained. The PDI value depends on the earthquake severity index (ESI). As based on the ESI value, the PDI can be estimated from a graph and then the Predicted Damage Factor (PDF) is calculated. The local magnitude of the causative earthquake and the peak ground acceleration are considered to estimate the seismic vulnerability of the dams. The last step for assessment techniques is to rank the dams by TRF and to assign risk classes. Bureau (2003) states that the risk class can be used to establish the need for more detailed seismic evaluations and to estimate priorities for such evaluations.

Turkey is situated in a region with a very complex geology and active seismicity. It lies between the Eurasia plate and the Arabian shield and moves west approximately 3-5cm per year. Most of the country’s earthquakes resulted from tectonic activities of these plates (Mckenzie, 1972). There are four main fault systems throughout the country, the significant ones are the Northern Anatolian Fault system, which is composed of a strike slip fault that is approximately 1200km long, and the Eastern Anatolian Fault system. Each of these faults has produced large earthquakes in the past. Many dams are located on or close to these faults.

In the study featured here, the computer program developed at the Earthquake Research Center (part of Osmangazi University Eskisehir in Turkey) was used for the probabilistic and deterministic assessment of seismic hazard. The seismic sources were identified and the recurrence interval of earthquakes was estimated.

For the study, 30 large embankment dams, located in different seismic zones, were considered (their physical properties are shown in Table 1). Some of them are very close to the energy source, while others are located on sites with low seismicity. According to ICOLD classification, 27% of the 30 dams will be subjected to high earthquake loads with a PGA greater than 0.25g. The others are identified as low to moderate hazard ratings. 43% of the 30 dams are classified as low class, and 30% as moderate class.

The most critical seismic zone in Turkey is the Northern Anatolian Fault. Within this zone, five embankments dams, – Kirazdere, Kilickaya, Hasanlar, Derinoz and Erzincan – have critical PGA values. Kirazdere dam, which is close to the epicenter of the catastrophic 1999 Izmit earthquake, can be subjected to a PGA of 0.40g with an MDE of 7.8. The other important embankment under high potential seismic load is Kilickaya dam. The critical PGA value for this dam is estimated at 0.32g with an MDE value of 6.4.

Derinoz and Erzincan dams are also located within this fault zone. The MDE values estimated for Derinoz and Erzincan are 7.2 and 7.9 respectively. Hasanlar dam, which is very close to the Northern Anatolian Fault, has a design PGA value of 0.32g (Table 2).

Another important seismic zone in Turkey is the Eastern Anatolian Fault. There are many large dams built on or close to this zone. However, only one large dam, Aslantas, is subjected to potential high earthquake loads. The design PGA for this dam is 0.34g with a MDE value of 6.6. It should be pointed out that there are many dams with moderate hydraulic height (<70m) which could be subject to critical seismic loads. One of them is Surgu dam which was damaged during the Dogansehir earthquake with Ms of 5.8 (Tosun, 2002). This study also reveals the fact that Ataturk dam, though impacted by the same fault, only has a design 0.03g PGA associated with a MDE of 5.9 (Table 2). Ataturk dam is the largest dam in Turkey, with a storage capacity of 48,700hm3.

There are two separate dams under the influence of high seismic loads in northeastern Turkey. Gonen and Madra dams are subjected to 0.44g PGA associated with a MDE of 7.3 and 0.28g PGA associated with a MDE of 7.2 respectively. For Madra dam, the analysis based on a point source zone gives critical peak ground acceleration value, while the critical value is obtained by the analysis based on a lineal source zone for Gonen dam. All of the dams subjected to high peak ground acceleration, with the exception of Madra, are very close to fault zones and can be considered as dams under near source effect.

Throughout the study, a potential risk analysis based on reservoir capacity, height, evacuation requirement and potential downstream damage was performed for each dam. Following ICOLD guidelines, all dams are classified in risk classes IV (high) and V (extreme), see Table 2. Bureau (2003) suggested an evaluation method combining the seismic and potential risk classifications. According to Bureau’s method, 50% of all dams are identified as risk class III, while the rest are classified as risk class II (Table 3).

As a result of this study, 70% of the dams have been identified to be in either the high or extremely high risk classes, and 27% of them are under the influence of a near seismic source. For the dams with high risk rating, detailed further analysis should be considered, with the acceleration time histories. At least 15 large embankment dams have been identified here that should be re-analysed by selecting appropriate seismic parameters. Rehabilitation design and construction measures, if necessary, may follow in cases where the dams are found deficient seismically.

The seismic performance of embankment dams closely depends on the nature and strength of the fill material and foundation. Stability problems for embankment dams can occur due to earthquake shaking and it is palpable to say that earthquakes can cause great danger to dams. It is of utmost importance that a national dam safety programme for dams and their appurtenant structures be implemented in Turkey. The highest priority of review and evaluation should be reserved for large dams near active seismic zones. All high risk dams should be redesigned and rehabilitated if needed to provide earthquake resistance – this would be a great stride toward the goal of protection of public safety and property.

This paper is printed with kind permission of the Association of State Dam Safety Officials. For further information, please visit www.damsafety.org.