Aturbine operating with supercritical CO2 as the working fluid, with oxyfuel combustor, is one of the enabling technologies needed to make the highly promising Allam Cycle a reality (see MPS April 2016, pp 8-10). 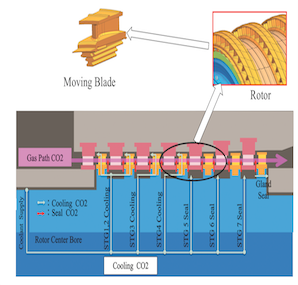 Toshiba is developing the first-of-a-kind turbine and combustor, and is expected to be shortly supplying this equipment to the 50 MWt demonstration project currently under construction in Texas, where first firing is pencilled in for around March 2017. Toshiba has been working on the new technology since 2012, in conjunction with NET Power, CB&I, Exelon and 8 Rivers Capital.

The new supercritical CO2 power cycle employs high temperatures and high pressure gas at the turbine inlet. To cope with these conditions, Toshiba has utilised materials developed for use in high temperature steam turbines together with technology derived from combustion and cooling technology used in gas turbines, eg, thermal barrier coatings and intricate cooling channels.

The Toshiba developed CO2 turbine combines elements of both advanced steam (including the ability to operate at 300 bar, with pressure ratio about 10) and the high temperature capabilities ofgasturbines.

The inlet temperature of the turbine is 1150°C, which is in fact “not that high” compared with modern gas turbine practice, said Hideo Nomoto (formerly Toshiba, now with 8 Rivers) at a March 2016 IMechE conference in Manchester, UK (Steam turbine and generator user group).

The required Ni based materials had already been developed by Toshiba for gas turbines and advanced ultrasupercritical coal plant applications (eg, TOS1X and TOS3X) and were “ready for use”, so “time consuming materials R&D was not necessary”, according to Hideo Nomoto, although the welding has proved difficult.

Rig testing on the Toshiba developed combustor has been successfully completed at a test rig in California. This is a first of a kind in view of the high pressure, and working fluid, but because there are no NOx emissions from atmospheric nitrogen, a stable diffusion flame can be used.

The combustor has been designed to cope with a gas pressure of 300 bars, more than 10 times the pressure used in conventional gas turbines, Toshiba notes.