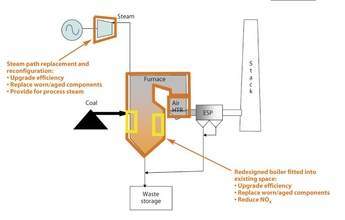 SaskPower’s competition for international post-combustion carbon dioxide technology suppliers is nominally wide open, although one of the contenders as possible technology supplier to the Boundary Dam 3 carbon capture and storage project is likely to be Saskatchewan based HTC Purenergy, whose mission includes commercialisation of carbon capture and storage technologies originated at the University of Regina and at the International Test Centre for CO2 Capture located there (see Modern Power Systems, July 2008, p 5). Purenergy reports that there is already a small (4t CO2/d) demo facility employing its technology in operation at Boundary Dam.

A key distinction between the Boundary Dam 3 post combustion plan and the utility’s cancelled oxyfuel project at Shand, Regina-based Ball explained, is that the Shand concept envisaged new build while the proposed Boundary Dam 3 project is a relatively small-scale retrofit of an existing station, with the carbon dioxide going to enhanced oil recovery, promising a better match between project carbon dioxide flow rates and carbon dioxide market needs.

The stations are part of SaskPower’s three-station southeastern Saskatchewan lignite-fuelled generating fleet. Both are minemouth stations, Boundary Dam consisting of six units totaling 812 MW and the adjoining Shand station, one 279 MW unit. SaskPower has recently undertaken life extension work at Boundary Dam, the name reflecting the fact that its cooling water reservoir extends to the Canada–USA boundary with North Dakota.

Ball estimated that the Boundary Dam CCS scheme will avoid one million tonnes of carbon dioxide emissions annually and noted that it was launched upon the minority conservative government of Canada’s 26 February “budget 2008” announcement of a $240 million promise for the BD3 project.

In January 2007, Modern Power Systems had reported on the proposed Shand project “SaskPower joins CO2 capture race.” But in May 2008, SaskPower revealed an apparently fatal flaw at Shand. The Regina Leader-Post headlined on May 28: “Clean coal project needs buyer for CO2,” reporting remarks by Ball’s deputy manger Doug Daverne: “Oil industry buy-in is critical to the project … We don’t think the Shand ccs project is economic right now unless we can receive some value from CCS created for enhanced oil recovery.”

The Leader-Post commented that the carbon dioxide volumes SaskPower planned for the Shand CCS project had exceeded enhanced oil recovery (EOR) demand, “further escalating the cost” of the Shand demonstration.”

Weeks before SaskPower’s long-advertised “mid-2007” go or no-go decision on its Shand oxyfuel demonstration project, Ball told MPS: “We are not in a position to discuss the clean coal project.”

On 6 September 2007, chief executive officer Pat Youzwa declared: “Given the need for new supply by 2010, and given the costs of clean coal at this stage in its development, it would have been premature to proceed to the construction phase at this time.”

On 2 April, opposition New Democratic Party critic of the Crown Investments Corporation and SaskPower in the Saskatchewan parliament, Kim Trew, demanded that the governing Saskatchewan Party clarify federal promises to Regina on Boundary Dam 3: “Where is the due diligence on this file? Where is the memorandum of understanding?”

NDP opposition leader and February 2001-November 2007 Saskatchewan premier Lorne Calvert echoed this scepticism. “We mistrust Harper’s $240 million pledge. We think this money was tied to unspecified actions Harper would expect later from Saskatchewan,” he said. Calvert believes Harper is not able to demonstrate that his government is taking very significant action or any action at all in relation to carbon capture and storage in Saskatchewan: “He’s hung his hat on CO2 sequestration when in fact he’s inherited all the work that’s been done on carbon sequestration in this province.”

On July 9 in Ontario, Liberal Party of Canada leader of the official opposition to the Conservative government, and Canada’s potential next prime minister, Stefane Dion, told MPS that the Conservative Party’s “budget 2008” commitment of $240 million for the Boundary Dam 3 CCS project is “totally unreliable and yes indeed, we agree it lacks due diligence.”

Dion’s “Green Shift” manifesto for Canada’s imminent general election advocates “fundamental change in the way government operates.” Dion’s “change” concept harkens back both to his recommended thoroughgoing reforms to limit greenhouse gas emissions, and possibly also to the “change we can believe in” presidential election banner at www.barrackobama.com.

Saskatchewan is a jurisdiction of historically complex and conflicted energy and environment politics. In this exceptionally-nuanced universe, the credibility and acceptance of SaskPower’s carbon dioxide capture and storage plan hinges on an essential but elusive consensus, depending on verification, implementation and timing of key funding commitments.