Run of the mill

Prompted by investigations into hydro potential at former mill sites in south east England, the county of Kent – not famed for hydro these days – is enjoying interest in micro power generation. Suzanne Pritchard reports 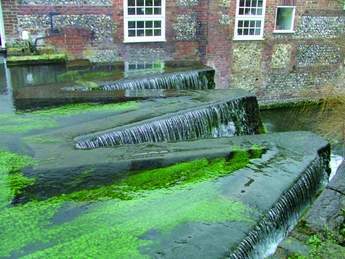 The southeast of England has been described as the ‘powerhouse’ of the UK – that is, it has the largest, fastest growing economy. However, the region’s production of renewable energy is not keeping pace. Sustainable energy is only a fraction of installed energy capacity and local government is under pressure to meet green targets. By 2026, 14% of the region’s electricity must come from renewable sources.

As David Williams, chief executive of the British Hydropower Association (BHA) acknowledges: ‘The British government’s Renewables Obligation has breathed new life into the UK hydro sector. It is the much smaller run-of-river schemes that continue to offer potential for development and investment opportunities.’

Indeed, Williams says that the micro hydro potential derived from the rehabilitation of power production at old watermill sites cannot be overlooked. If one-third of the old watermills in the UK were to produce an average of 25kW each, there would be 170MW of useful generation available.

In their report into low head hydro in south east England, in 2004, TVEnergy (TVE) and MWH found that interest in small hydro has started to grow within the region. ‘It is not large when compared to other renewable energy resources [but] is nevertheless significant and can contribute to regional sustainability objectives,’ the report says.

The origins of some watermills in the UK can be traced as far back as the fifteenth century, and estimates suggest that as many as 20,000 old mill sites still exist. TVE and MWH believe, on a local level, that individual projects can make a great deal of difference creating environmental, social and economic benefits for communities. One project in Kent is creating a ripple effect within the micro hydro community.

The Kent Hydropower Project got underway in 2003 when, run by a local non-profit company called Creative Environmental Networks (CEN), it started looking at historic watermills and potential hydro power sites. Government funding was secured and CEN embarked on pre-feasibility studies for potential micro hydro sites. Studies have identified about 150 potential sites, including 15-20 which are owned by the Environment Agency (EA) for England and Wales.

To help reduce its carbon footprint and promote renewable energies, the EA’s Southern Region has been awarded funds from its Carbon Reduction Fund to commission full feasibility studies for four of the sites. The sites under consideration are Allington Lock, Hampstead Lock/Weir, Leigh Flood Barrier and Sluice Weir Lock. They are all located on the river Medway. Although the projects have been put out to tender for full feasibility studies, they are still a long way from installation even if any of the sites proved to be favourable.

She continues: ‘The feasibility studies will enable the Environment Agency to show that it has investigated the hydro power opportunity, and be in a position to either rule out sites in terms of their potential or to move on to the next stage.’

David Shewan, of CEN, who has been spearheading the Kent Hydropower Project, says: ‘It would be foolish not to install a turbine where there are major sluices that need refurbishment. The civil works are the major cost of a hydro scheme so why not incorporate the hydro component as part of the agency’s rolling refurbishment programme?’

Maidstone Borough Council had considered installing micro hydro generation at the Bishops Way mill site on the river Len (a tributary of the Medway), and a technical feasibility study was commissioned, in 2005. However, funding proved a barrier to development. However, proposals for the Medway itself are a different proposition.

‘Allington is at the point where the locked river system discharges into the tideway and thus presents a much better opportunity for generation at the weir and sluices,’ says Dan Daley, a councillor with MBC. ‘We believe that these are soon to be refurbished, and it is this element which we hope will present the best opportunity to install some form of turbine when this work is undertaken.’

Crabble Corn Mill is one of the sites identified by the project and is now generating power. Located on the river Dour, it was the venue for a recent BHA seminar on micro hydro. ‘The choice of Kent as a venue was initially received with scepticism from some corners,’ said a BHA spokesman. ‘It is not famous for its hydro potential compared with other “wetter” areas in the UK.’

However, the mill is thought to be the only remaining operational corn mill out of 300 mill sites within the county. And its newly installed 4.7kW micro hydro scheme just goes to show there is no lack of potential. Described as possibly one of the finest working watermills in Europe, Crabble is a working museum, staffed by volunteers, and produces flour. The mill was in economic operation from 1812-93, fell into disrepair and after a charitable trust undertook restoration it was re-opened in 1991.

‘The overheads associated with the watermill and maintenance of the water course are astronomical, especially for the amount of business we have going through the mill,’ says Neil Anthony, founder of the Crabble Corn Mill Trust. ‘We decided that if we could produce our own electricity it would really help. After all, until modern times, the mill had always been self-sufficient.’

Another key consideration was that such a hydro power scheme at the mill would enhance the visitor experience, and educational demonstrations could show how water power is converted into electricity. Furthermore, possible barriers to the hydro project, such as finding a suitable location to site the turbines, were not seen as a problem.

‘For me,’ Anthony adds, ‘a real serendipity was that the most desired location to site our turbines was within the tailrace of the older mill, which was built on the site prior to Crabble. It’s right where a waterwheel was situated at the more ancient Crabble Mill. It’s just a natural upgrade to put a contemporary power source where a historic one previously existed.’

The project’s power component wasn’t designed for commercial gains but it has been estimated, dependent on tariff, that the mill may earn £1500-£2500 (US$3000-US$5000) per year from selling surplus energy to the grid. ‘We just wanted enough power to support the mill. And we were in a win/win situation as we qualified for grant aid through the Clear Skies programme,’ Anthony explains.

Clear Skies was a funding programme run by the Department of Trade and Industry. It offered grants to charities and the public for renewable micro-generation schemes. Under its charitable trust status, Crabble Mill was able to secure this financing, and in addition to money from power company edf’s Green Energy Fund, it obtained more than £60,000 (US$120,000).

The feasibility study for the Crabble Corn Mill project was completed in 2005. The project contractor is Hydro Generation and three of the company’s patented, 200mm polymer turbines were selected. The design of the 1.5kW turbine module was highly rated for educational purposes. Its light, open and small construction would be less intimidating for younger visitors, and would increase visibility of hydro operations.

The hydro power output will cut the building’s carbon emissions by more than 12 tonnes a year. To help replenish fish stocks on other rivers, the EA is using mill ponds at Crabble Mill as breeding grounds for trout. The river Dour is also being used as a conservation area to reintroduce certain species of plant.

While interest mounts, cost is a real issue. Crabble Mill went ahead as it was successful in securing full funding as general installation costs are high, though the payback period is only seven years. CEN’s David Shewan says: ‘These are not large commercial ventures. And a 20kW scheme may not make much money but some power companies are now taking it more seriously. They are looking to increase their renewable portfolio and buy back power from local green projects. More small and medium businesses are also looking into this. It’s a bit like a cottage industry.’

He has also set his sights on slightly larger hydro schemes around the county. Bewl Water reservoir is the largest in Kent and has a 20m head. A preliminary assessment is that the penstocks only need to be 100m long, while the earth dam means minimal impact and a reduction in the cost of civil works. ‘We could get at least 100kW from this,’ Shewan enthused, ‘and we could possibly look at other reservoirs as well.’