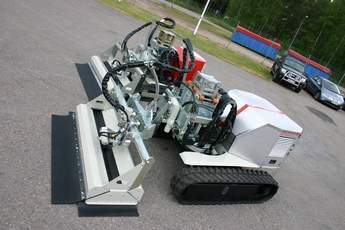 When working on a construction project, one of the most difficult decisions a project manager is faced with is deciding which equipment would best suit the job in hand. In the following feature we highlight some of the latest products to hit different sectors of the marketplace, and detail how they have been used in some recent projects

Anchors are durable, economical tension supports to secure, stabilise and augment structures. Made of high strength steel bars or strands they can be bonded to rock, concrete and many types of soil. They are used to counteract external overturning, uplift and seismic forces, and are used actively (pre-stressed) or passively (non stressed).

Rock and concrete anchors are pre-stressed tendons that can be bars or multiple strands. Stranded tendons can be fabricated for extremely high capacity load. The tendons are coupled or coiled allowing for installation with limited access. A portion of the length is bonded to rock or concrete by cement grout, resin, or fixed by a mechanical anchor. The upper portion is left ungrouted for pre-stressing but is grouted afterwards to lock in tension and protect against corrosion.

Soil and rock nails are fully grouted anchors used to resist uplift forces and failure forces on slopes and excavations.

The Judy Company has supplied various anchor supports to dam projects in the US. For example, at lock and dam #1 in Minneapolis, movement in a tall retaining wall was stopped with the installation of high capacity rock anchors. Access was very limited requiring the design and construction of a climbing drill, and the anchors were installed in areas 26m above the ground.

Boltec rigs from Atlas Copco are described as being a cost-effective method of installing rock bolts in tunnels and underground power plants. Boltec MC features the Atlas Copco rig control system, which incorporates auto-collaring and anti-jamming protection, and is suited for bolting in medium sized tunnels to a maximum roof height of 9m. The M-series has articulated steering for easy manoeuvring and a powerful diesel engine for fast tramming.

In terms of projects, on 18 September 2008 a 12.43m diameter Robbins TBM machine was launched on a 16.7km long hydro power tunnel in Sichuan Province, China. The machine will bore one of four headrace tunnels, which will draw water from the nearby Yalong river, a tributary of the Yangtze. The large TBM will join another 7.2m diameter Robbins machine, which was launched earlier in 2008 to bore a drainage tunnel on the same project.

Assembly of the Main Beam TBM and back-up system began in April 2008 at the Jinping-II headrace tunnel 1 and was finished on 11 August. Crews then walked the TBM and the first three back-up gantries 200m forward to a launch chamber, where the conveyor system and six more gantries were assembled.

Due to go online in 2010, the Jinping-II hydropower station will utilise a natural 180 degree bend of the Yalong river, resulting in a 60m drop in elevation to generate 4800MW of electricity annually. The project, owned by Ertan Hydropower Development Company, is located 17km downstream from the Jinping-I hydropower station. It is slated for completion in 2014 and will have an annual generating capacity of 3600MW.

Work on the Yeywa hydroelectric power station in Myanmar is also making good progress. The 790MW scheme is being constructed approximately 50km southeast of Mandalay, the country’s second largest city. Up to 5000 workers are employed on the vast construction site. In addition to the two tunnels to redirect the Myitnge river, a 197m high embankment dam, consisting of 2.8Mm3 of concrete, is under construction. Equipment selected for the concreting operations include Putzmeister’s MX 32 stationary boom, an M 38 truck-mounted concrete pump and two BSA 2109 HP stationary pumps. Putzmeister offers various solutions for concreting applications at such RCC dams. For example the Sika-PM407 is particularly suitable for small tunnels, while the Sika-PM622 concrete spraying system has been developed for applications in which the previous spraying arm reach of 16m is not sufficient.

One such example is the Trimble GCS900 grade control system which is described as being ideal for mass earthmoving applications such as dam and reservoir construction. With the system, the excavator’s in-cab operator display gives an overall site plan indicating where operators are on the site, what the desired depth is and how far from the target they is. This increases speed to the desired depth and prevents over-excavation. In addition, use of the in-cab display can help to avoid potentially unsafe areas. With these capabilities, operators can keep tighter control over safety issues and see precisely where dirt is being moved on site.

The construction industry is said to be moving towards greater acceptance of such GPS machine control. Specifically in North America, uptake of GPS in hydraulic excavators has been steadily increasing. Furthermore, new excavators are being fully prepared by manufacturers to accept the new technology. Trimble has a Trimble Ready programme where the main components of the GPS system can be installed easily.

Case Construction Equipment is another company that supplies excavation equipment. It has recently announced the upgrade of its largest excavator – the CX800B – to its B Series line of excavators. The new CX800B features increased fuel efficiency and productivity, as well as improved operator comfort and ease of maintenance. The excavator also features an electronically controlled, 15.7L Isuzu engine which delivers 397kW. The CX800B is available in standard and mass excavation configurations. It features regenerative hydraulics on the boom and arm, as well as the bucket curl, which improves the cycle time required fill a bucket. Larger-diameter hydraulic cylinders deliver a breakout force of 330kN.

John Deere manufacturers the 250D to 400D models and is among the major players to cover the 25-40 ton range. Caterpillar has two ejector body models – the 730 and 740 Ejector – which are capable of spreading material on the go. Such trucks have been put to good use on a dam construction project in Missouri in the US where the truck is being filled with wet concrete and then being pushed out for dam construction. Meanwhile Case has updated its 335B and 340B models. New additions to the range include a tilt cab to provide easy access for maintenance checks, plus an automatic lubrication system that continuously greases all lube points from a central distribution block.

Such earth moving equipment is currently being utilised at the Animas-La Plata water project in southwest Colorado in the US. Construction is underway and scheduled for completion in 2011. The greatest quantity of earthmoving has been performed by nine Caterpillar excavators (ranging in size from model 320 to 385) and feeding rock trucks, ten of which are Caterpillar 60-ton rigid frame end dumps, and 11 of which are a mixture of Cat and Volvo 40-ton articulated trucks units.

Other primary earthmovers include four Cat 631 scrapers which are used for excavating and hauling materials; plus five large Cat 988 wheel loaders. These are supported by five Caterpillar motor graders; eight bulldozers, from a pair of Cat D9s down to a single John Deere 400; nine compaction rollers; and a Cat Challenger rubber-tracked tractor pulling discs. Five water trucks and five scraper-based water wagons are also supporting the earthmoving operations.

Featuring an optional extended mast height of up to 9m, the new robot is 20% larger than conventional models and offers larger, adjustable tracks to provide a variable width of between 1.5-2m; for increased stability if required.

The hybrid model also incorporates a new type of steering drive to turn and twist the units powerhead at the increased heights to provide improved precision.

Aquajet has also developed a multi-axis system allowing the powerhead to be moved quickly, allowing it to work on vertical, curved or horizontal surfaces. The system can also turn the powerhead 180º in the horizontal position. To further speed operation, the robot has been designed to turn through 90º travelling along the wall surface. Together with the side movement of the powerhead, this helps eliminate the constant ‘stop-start’ turning of the robot. across the surface.