Along with its ambitious nuclear power plant construction programme, China is pursuing another goal: to build an underground geological research laboratory before 2020. 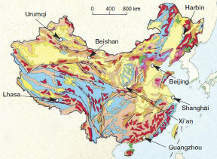 In 2007, the State Council of China approved the medium- to long-term plan for the development of nuclear power plants in China (2006-2020). Its goal was to increase the installed capacity of nuclear power plants to 40 GW by 2020 (by which time it would have another 18 GW in construction). With 15 reactors now in operation and 26 more under construction, China is now expected to achieve this goal by 2015.

It is estimated from the Chinese nuclear power development plan that the spent nuclear fuel accumulated from light water reactors will reach about 2000t by 2015. Beyond 2020, LWR fuel is expected to accumulate at a rate of around 1000t per year. The two CANDU reactors at Qinshan-III produce about 200 tHM annually.

China has opted for a closed fuel cycle policy, which will include reprocessing of the used light water reactor nuclear fuel and direct disposal of CANDU spent fuel. The programme will be funded via a waste fund into which nuclear power plant operators must pay a levy of 0.026 CNY/kWh on nuclear generation. The fund will not only cover the disposal costs, but also the spent fuel transport and storage, as well as reprocessing.

A deep geological repository is envisaged, in a host rock of granite or clay. The repository will be based on the multi-barrier concept, with a shaft-tunnel disposal vault, and it will be located in a saturated zone (beneath the water table).

Under a 2011 rule, the China Atomic Energy Authority is responsible for the implementation of R&D, site selection, and construction of an underground research laboratory and repository.

Site selection for China’s HLW repository started in 1985. The process was divided into four stages: nationwide screening, regional screening, area screening and site confirmation. By 1986, five potential host regions had been identified: one in southwestern China, one in eastern China, another in Inner Mongolia Autonomous Region, a southern China region and a northwestern China region. Regional screening (1986-1989) narrowed this down to one site in the Beishan area of northwestern China’s Gansu Province.
Beishan is located in the Gobi desert area, which has a low population density, poor economic prospects, and yet is still convenient for transportation.

Site characterization has been underway at the Beishan site since 1990. Within the Beishan area, eight granite intrusions were initially chosen as candidate sub-areas for a HLW repository. Among them, three sub-areas (Jiujing, Xinchang-Xiangyangshan and Yemaquan) were picked for further investigation. During the decade spanning 1999-2012, site characterization focused on these three sub-areas, and surface geological, hydrogeological and geophysical investigations, and 19 boreholes were drilled.

Preliminary conclusions show that the region has no important mineral reserves, and has favourable hydrogeological conditions and favourable host rock (granite and diorite).

According to China’s plan, once it is recognized that the Beishan area is suitable, an underground research laboratory will be built there, and more detailed site evaluation, in-situ tests and underground experiments will be conducted. The URL will serve as both a methodological laboratory and a site confirmation tool.

China has a three-step strategy for HLW disposal. In 2006, the Chinese government published a long-term research and development plan for geological disposal of high-level radioactive waste. The programme consists of three steps: (1) laboratory studies and site selection for a HLW repository (2006-2020); (2) underground in-situ tests (2021-2040); and (3) repository construction (2041-2050) followed by operation.

While Beishan remains the most promising site for China’s HLW repository, and investigations continue, in 2011 the government announced a new strategy for site selection. It selected a dozen sites in China, and after comparison narrowed these down to three potential sites that are ‘equally suitable’ for a repository in Xinjiang and Inner Mongolia. All three sites were in host rock of either granite or clay. During Stage 1, site selection for a HLW repository in western China will also continue, with the aim of finding a second site that can be compared with Beishan.

Also, investigation will be carried out on bentonite, which would form the barrier material used in the repository. The Gaomiaozi (GMZ)bentonite deposit (~160Mt) in Inner Mongolia has been selected as the potential supplier for the bentonite that will be used in the repository. A large-scale mock-up has been established at the Beijing Research Institute of Uranium Geology, an institute attached to the Chinese National Nuclear Corporation, in order to study the behaviour of bentonite under simulated repository conditions.

From 2021 to 2040, site characterizations are expected to be complete, and a final repository site confirmed. Most of the in-situ tests in the URL should have been completed, and CAEA should have obtained the technical capability to construct the repository.

Repository construction should begin around 2041, finishing by 2050.

This article is based on a presentation made by Dr Ju Wang of the Beijing Research Institute of Uranium Geology at The fourth International Conference on Geological Repositories (ICGR) in Toronto, Canada, Sep-Oct 2012, and on one of his earlier papers published in the Journal of Rock Mechanics and Geotechnical Engineering. 2010, 2 (1): 1-11.