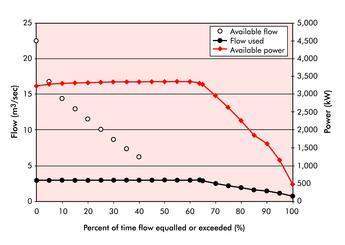 Opportunities for implementing commercially viable, energy efficient and renewable energy technologies (RETs) are currently being missed because various planners and decision-makers still do not routinely consider them at the critically important initial planning stage, even when technologies like small hydro have proven to be cost-effective and reliable in similar situations elsewhere. The RETScreen International Clean Energy Decision Support Centre, which is managed by Natural Resources Canada’s CANMET Energy Technology Centre in Varennes, is focused on overcoming this barrier.

The RETScreen International Clean Energy Project Analysis Software developed by the centre can be used worldwide to evaluate the energy production, life-cycle costs and greenhouse gas (GHG) emission reductions for various types of proposed technologies. The RETScreen Software also includes integrated product, cost and weather databases and a detailed online user manual, all of which help reduce the time and costs associated with preparing pre-feasibility studies.

Each RETScreen technology model – a small hydro project, for example – is developed within an individual Microsoft Excel spreadsheet ‘Workbook’ file composed of a series of worksheets. These worksheets have a common look and follow a standard approach for all technology models to facilitate decision making. The five-step standard analysis approach is presented in Figure 1.

The principal benefit of using the software is that it requires a relatively small amount of input data to run (annual or monthly data in the RETScreen model compared to hourly data for competing simulation models). The market reality is that the vast majority of possible projects do not have hourly data (e.g. electricity or heating loads) so hourly simulations performed by other models do not necessarily provide more accurate results, and these models are typically more difficult and expensive to run due to intensive data requirements. Even with this reduced data requirement, the RETScreen software provides results at an accuracy that is more than sufficient for pre-feasibility studies.

Energy modelling experts, cost engineering experts, greenhouse gas modelling specialists, financial analysis professionals, and ground station and satellite weather database scientists have contributed to the development, testing and validation of the RETScreen software. In addition, to help ensure that the model produces results that decision-makers can trust, third party experts have validated the algorithms in comparison with measured data and/or hourly simulation models.

Models for other clean energy technologies are currently under development, including a new Combined Heat and Power (CHP) Model.

The RETScreen small hydro project model provides a means to assess the available energy at a potential small hydro site that could be provided to a central grid or, for isolated loads, the portion of this available energy that could be harnessed by a local electricity utility. The model addresses both run-of-river and reservoir developments, and it incorporates sophisticated formulae for calculating efficiencies of a wide variety of hydro turbines.

The Energy Model, Hydrology & Load and Equipment Data worksheets are completed first. The Cost Analysis worksheet should then be completed, followed by the Financial Summary worksheet. The GHG Analysis and Sensitivity worksheets are optional analyses.

The ‘Detailed’ method allows the user to estimate costs based on estimated quantities and unit costs. The use of this costing method requires that the user estimate the size and the layout of the required structures.

In order to use the RETScreen model, the user may require certain information that can be obtained from topographic maps. In cases where a previous hydrological assessment has been undertaken for the site in question, the pertinent data can be used in the model. If the available head, or drop in elevation, at a site is unknown, a site visit will be required to measure the head unless detailed mapping is available.

Calculation of Available and Delivered Energy

Small hydro turbine efficiency data can be entered manually or can be calculated by RETScreen. Calculated efficiencies can be adjusted using the Turbine manufacture/design coefficient and Efficiency adjustment factor in the Equipment Data worksheet of the model. Standard turbine efficiencies curves have been developed for the following turbine types: Kaplan; Francis; Propellor; Pelton; Turgo; Cross-flow.

Power available as a function of flow

Actual power P available from the small hydro plant at any given flow value Q is given by the following equation, in which the flow-dependent hydraulic losses and tailrace reduction are taken into account:

where p is the density of water (1000kg/m3), g the acceleration of gravity (9.81m/sec2), Hg the gross head, hhydr and htail are respectively the hydraulic losses and tailrace effect associated with the flow; and et is the turbine efficiency at flow Q . Finally, eg is the generator efficiency, ltrans the transformer losses, and lpara the parasitic energy losses; eg, ltrans, and lpara are specified by the user in the Energy Model worksheet and are assumed independent from the flow considered.

Hydraulic losses are adjusted over the range of available flows based on the following relationship:

where lhydr,max is the maximum hydraulic losses specified by the user, and Qdes the design flow. Similarly the maximum tailrace effect is adjusted over the range of available flows with the following relationship:

An example power-duration curve is shown in Figure 4, with the design flow equal to 3m3/sec.

Available energy is determined by calculating the area under the power curve assuming a straight-line between adjacent calculated power output values. Given that the flow-duration curve represents an annual cycle, each 5% interval on the curve is equivalent to 5% of 8760hr (number of hours per year). The annual available energy Eavail (in kWh/yr) is therefore calculated from the values P (in kW) by:

where ldt is the annual downtime losses as specified by the user. In the case where the design flow falls between two 5% increments on the flow-duration curve (as in Figure 5) the interval is split in two and a linear interpolation is used on each side of the design flow.

The amount of renewable energy actually delivered depends on the type of grid to which the plant is connected.

For central-grid applications, it is assumed that the electricity grid is able to absorb all the energy produced by the small hydro power plant. Therefore, all the energy available will be delivered to the central grid and the renewable energy delivered, Edlvd , is simply:

where P’n,k is the lesser of load Lk and available power Pn:

The RETScreen International Online User Manual is a ‘Help file’ directly linked to each RETScreen technology model Microsoft Excel workbook file. It is cursor location sensitive and therefore gives the help information related to the cell where the cursor is located. There is a tremendous amount of information available within the manual, including cost data and typical range of values for various input parameters that help the user properly prepare their pre-feasibility studies.

More detail on all of the features of the model including training material, the e-Textbook and case studies can be found at www.retscreen.net. All are available in English and French, free-of-charge.

There are some limitations associated with the small hydro model. First, the model has been designed primarily to evaluate run-of-river small hydro projects. Although the evaluation of storage projects is possible, a number of assumptions are required. Variations in gross head due to changes in reservoir water level cannot be simulated. The model requires a single value for gross head and, in the case of reservoir projects; an appropriate average value must be entered. The determination of the average head must be done outside of the model and requires an understanding of the effects of variations in head on annual energy production. Second, for isolated grid applications in isolated areas, the energy demand has been assumed to follow the same pattern for every day of the year. For isolated locations where energy demand and available energy vary significantly over the course of a year, adjustments will have to be made to the estimated amount of renewable energy delivered. Changing the ‘Available flow adjustment factor’ in the Energy Model worksheet does this.

Since its release in May 1998, more than 42,000 users in 200 countries have licensed a copy of the software (free-of-charge) from the centre, as depicted in Figure 6. Demand is growing at about 200 new users per week and significant growth is now taking place with the number of RETScreen users projected to grow substantially over the coming years.

The RETScreen small hydro project model condenses in an easy-to-use format a wealth of information, and it should be of great assistance to engineers, planners and financial institutions involved in the preliminary evaluation of small hydro projects.

In addition to the core team at CETC-Varennes, more than 140 additional people have been directly involved in the development and support of RETScreen International, with roughly 20 to 50 people working with the core RETScreen team during the course of the year. They include expert staff from the RETScreen partner organisations such as UNEP, NASA, the World Bank and other Government of Canada programmes, as well as experts from a number of private-sector firms. In addition to the authors of this article, many other people contributed to the development of the RETScreen Small Hydro Project Model, including Guy Painchaud, Ève-Line Brouillard, Michael Ross, Vadim Belotserkovsky, Jean-Michel Parouffe, Carolyn Luce, and Nartin Hamel of GPCo Inc.; Jim Gordon, hydro consultant; Didier Thevenard of Numerical Logics; Pierre Hosatte of TN Conseil; Mark Radka, Eric Usher and Joergen Fenhann of UNEP; Frank Lecocq of the World Bank; Binu Partham of IT Power India; Jacuqes Mailhot and Michel Tremblay of SNC-Lavalin; Pascale Brière of Acres International; and Chris Weyell of Sigma Engineering.