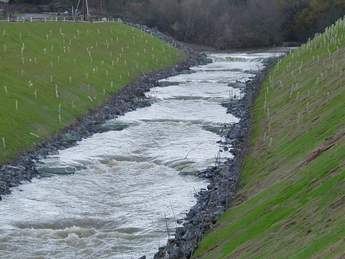 Since the mid-1990’s many of the Pacific Northwest’s once abundant salmon populations have been placed on the Federal Endangered Species list. The impact of the federal listing has been broad, affecting sport and commercial fisheries, agriculture, municipalities, and private property owners. Restoring habitat and removing barriers to existing habitat has become an important component of salmon recovery. As part of its Fisheries Enhancement Programme, the Sonoma County Water Agency (SCWA) sponsors and conducts fish passage and habitat restoration projects throughout the Russian river watershed. Through projects such as the Mumford Dam Fish Passage and Riparian Restoration project, SCWA strives to improve habitat for fish and other aquatic species and restore runs of salmonid species that have been negatively impacted by current and historic watershed uses.

The Mumford dam is located on the west fork of the Russian river in an unincorporated area of Mendocino County, California, US, approximately 1.6km from the town of Redwood Valley. Originally constructed in 1907, the Mumford dam was a 12.2m wide flashboard dam used to impound water for vineyard irrigation and frost protection. Between 1960 and 1990 a considerable amount of down cutting occurred in the upper Russian river below the Mumford dam. Head cutting ceased at the base of the dam, resulting in a vertical drop of approximately 3.4m. The severe undercutting of the dam’s foundation jeopardised its structural integrity and prevented fish from accessing nearly 72km of salmon habitat upstream of the dam. The down cutting also resulted in severe channel incision and bank erosion. The purpose of the proposed project was to restore fish passage, stabilise the dam structure, prevent further bank erosion, and re-establish riparian vegetation.

A number of alternatives were initially considered, including partially or completely removing the dam. While complete barrier removal is generally considered the best approach, analysis of potential environmental impacts associated with this alternative included propagation of head cutting and channel incision, which would result in further loss of riparian habitat as well as potential impacts to bridge abutments upstream. It was determined that the dam foundation needed to remain in place as part of the design to avoid such impacts. SCWA explored a variety of methods for constructing weirs below the dam to raise the degraded bed elevation. As this was a restoration project as well as a passage project, preference was given to design alternatives that used rock and organic materials rather than more traditional engineered materials such as concrete and steel.

After reviewing a number of weir designs, the project team decided that the recently developed cross-vane weir (Rosgen 2001) was ideal for the application. A series of cross-vanes offered the ability to elevate the streambed for passage, reduce sheer forces on the adjacent banks, create pool and riffle habitat, and allow the use of rock and organic materials. Restoration activities would transform an entrenched, low-gradient channel (slope <0.02) with a high width/depth ratio (below the dam) into a more moderately entrenched channel with a moderate relief (slope 0.02 to 0.039) and a moderate width/depth ratio. To achieve the appropriate stream profile, and to terminate the project near a hard clay exposure that would limit opportunities for incision at the downstream end of the project, the design spanned over 221m of streambed and both banks. The complete project not only involved construction of the weirs, but major recontouring of the adjacent banks and post-construction revegetation. Due to the extensive amount of earthwork required, the stream was dewatered, all of existing diversion facilities adjacent to the dam were demolished, and all remaining riparian vegetation was removed prior to construction.

Following demolition activities, fill was placed in the channel to raise the streambed below the dam. Once grade was achieved, large key ways were cut into the fill for the foundation of each weir. The weir footings were created by placing a layer of 0.5 ton riprap (minimum dimension of 0.6m) in the bottom of each key way. After completion of the footings, a series of boulder cross-vane weirs were constructed using 8 ton stones (minimum dimension of 1.8m) installed on top of footings constructed in each key way. The stones were cabled together and the end of each weir was keyed into the adjoining banks. The seven upstream weirs were constructed approximately 20m apart, with a 0.3m drop in elevation between each weir. The overall effect of the weirs confined the low-flow channel, raised the streambed elevation, and created a fishway over the remains of the dam’s foundation. These structures were designed to provide fish passage even under relatively low flow conditions. An eighth weir was constructed approximately 76m downstream of the seventh weir. At this location the streambed is composed of hardened clay, a relatively non-erodible substrate, and served as the downstream elevational control for the project.

Fill remaining between the completed weirs was left in place to help seal and stabilise the weirs during the first few winter storms. Excess fill was flushed out during high flows. Pools began forming below each weir after the first storm and were fully developed less than half way through the first winter.

Prior to construction, channel incision had resulted in over-steepened banks throughout the entire length of the project footprint. In order to reduce further bank erosion the banks on both sides of the river were graded back to between 1.5:1 and 2:1 slopes, depending on site constraints. Steeper slopes were used in areas where achieving 2:1 slopes would have meant the loss of homes or private infrastructure. Significant areas of the adjacent vineyard were removed to make room for 2:1 slopes on the western bank. The toe of each slope was stabilised using large rock riprap and willow sprigs. The upper banks were stabilised using geotextile fabric (North American Green C125BN). Slopes protected by geotextile fabric were also hydroseeded with a mix of native grasses.

The recontoured slopes were planted with native vegetation including California bay (Umbellaria californica), white alder (Alnus rhombifolia), California buckeye (Aesculus californica), and Oregon ash (Fraxinus latifolia) based upon surveys of riparian habitat along the Russian river upstream and downstream of the project site. Riparian vegetation will help stabilise existing soil to reduce erosion and improve aquatic habitat quality by providing shade over the river. An irrigation system was installed to maintain the upslope vegetation until it becomes established.Finally, the vineyard owner replaced the diesel-powered diversion structure that was demolished prior to construction with an electric pump equipped with an approved fish screen.

The purpose of the proposed project was to restore fish passage, stabilise the dam structure, prevent further bank erosion, and re-establish riparian vegetation. The project has accomplished all of these goals, with varying degrees of success, and numerous lessons learned.

Fish passage at the project has been very successful. Chinook salmon began using the weirs to move past the dam before the project was finished and several Chinook were video taped passing the dam on the first day it was completed. A downstream migrant trap was installed below Weir 5 the following spring and documented that successful Chinook salmon and steelhead trout reproduction had occurred in the previously inaccessible habitat.

The overall function of the weirs has been exceptional. The project has endured several severe winters and has been subject to 100-year flood flows (Q100=179.7m3/sec) without weir movement or failure. Interstitial spaces in the weirs sealed with the remaining fill and bed load mobilised by subsequent storms. Flow remains on the surface and confined during summer discharges as low as 0.01m3/sec.

While passage is successful, an error in construction surveying resulted in Weir 1 being constructed 20.3cm higher than designed. This error caused the final jump at the dam to be approximately 50.8cm instead of 30.5cm. Under favourable circumstances, a single jump of this magnitude would not present a passage issue for adult Chinook salmon or steelhead trout. However, the depth below the apex of a cross-vane weir is relatively shallow, and as a result passage at Weir 1 is suboptimal at low flows. Planned modifications to lower the apex of Weir 1 should mitigate this error.

Recontouring has greatly improved the stability of the adjacent banks. Geotextile fabrics and hydroseeding have performed well under most circumstances. Significant erosion has occurred in some locations. While some erosion is inevitable, some could likely have been reduced with design changes. The original design called for the inclusion of a small bench at the bankfull elevation as prescribed by Rosgen (2001). Unfortunately, property constraints did not allow sufficient space for optimal weirs, slopes, and benches. Weir function and slope steepness were prioritised and the benches were omitted. This omission resulted in the stream channel attempting to create a bench at the bankfull elevation via erosion. The design had anticipated this eventuality and attempted to compensate by armouring the bank with riprap and willow revetments to just beyond the bankfull elevation. While this has helped, the channel prevailed in several locations which required the placement of additional riprap. Revegetation has also helped reduce erosion, but the time required for plants to reach functional maturity is lengthy, and other methods of erosion control need to be employed during the interim