Arecent position paper from EUTurbines, an association representing the European gas and steam turbine industry, sees power-to- gas as having an important role to play in the future as part of an energy system that includes an increasing share of intermittent renewable energy sources, such as wind turbines and photovoltaics. However, the paper says, improvements are needed in a number of areas if gas turbines are to make the most of this opportunity. 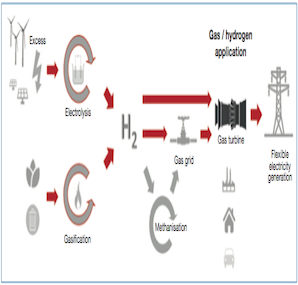 Arecent position paper from EUTurbines, an association representing the European gas and steam turbine industry, sees power-to- gas as having an important role to play in the future as part of an energy system that includes an increasing share of intermittent renewable energy sources, such as wind turbines and photovoltaics. However, the paper says, improvements are needed in a number of areas if gas turbines are to make the most of this opportunity.

Power-to-gas envisages the use of excess electricity generated at times of low demand to produce hydrogen via electrolysis. The hydrogen can be stored in the existing gas pipeline network, and burned by gas turbines when required. The use of power-to-gas, therefore, could be one of the flexibility providers in the future in an energy system with a growing share of intermittent renewable energy sources, ensuring electricity security of supply and contributing to the stability of the grid, says the EUTurbines position paper.

The fact that the existing gas pipeline infrastructure could be used for storage means that power-to-gas could be a cost- effective option compared to other storage options, EUTurbines suggests. In addition, the position paper notes, making use of the existing gas pipeline network enables the transmission of energy over long distances, which otherwise requires costly overhead high-voltage lines and associated infrastructure.

Hydrogen can be used in the form of pure hydrogen or mixed with natural gas. An additional potential source of hydrogen is gasified biomass or municipal solid waste.

Hydrogen can also be methanised in combination with CO2 and be injected directly into the gas grid.

The challenges for gas turbine technology arising from using natural gas with added hydrogen are mainly related to combustion, the position paper notes. The performance, lifetime, operation concept, emissions and availability of gas turbines may be impacted. Hydrogen addition results in increased reactivity, which is manifested as increased flame speed and reduced ignition delay time. Both of these two mechanisms affect combustion performance in general, which results in an increased risk of flashback in lean premixed combustion systems, leading to damaged hardware and elevated NOx emissions.

Research & innovation efforts are needed now, says the position paper, in order to address the challenges and to adapt the next generation of gas turbines to likely future requirements.

In particular, work is needed on flexible combustion systems, with the overall goal of avoiding flashback and auto-ignition while keeping emissions low with a high share of hydrogen in the fuel. This requires:

A number of areas also need to be addressed to ensure the safe functioning of the gas turbine under these new circumstances, for example: improved inner and outer gas turbine seals to avoid hydrogen diffusion; and safety instrumentation and monitoring system in gas turbine enclosures to avoid fire, explosions and other incidents.

Other areas requiring attention include: improved heat exchanger design for integration in the gas turbine cycle, maximising heat transfer effectiveness and minimising pressure loss, while accepting energy from almost any external source; and steam injection, namely developing a combustion system that can accept high temperature steam intermittently without detriment to emissions or performance.

The function of a gas turbine combustion system inside the Brayton cycle is to heat compressed air at near constant pressure. The heating can be accomplished in a number of ways: burn the fuel in the airstream; run the compressed air through a heat exchanger that has been heated by an external heat source (such as direct concentrated solar energy or boiler exhaust); high temperature steam injection; and use of the exhaust stream from a fuel cell.

To achieve complete fuel flexibility, the position paper notes, this would involve moving the combustion section from its traditional location inside the typical compact gas turbine envelope thereby allowing more flexible designs to be integrated.

The combination of turbines and fuel cells (as a substitute for the typical combustor) can play a role due to its potential thermal efficiency gain, although a better understanding in terms of CAPEX and OPEX, reliability and durability of the fuel cell, gas turbine/fuel cell operability and optimum size determination is needed, says EUTurbines. A number of specific technological challenges arise for the gas turbine/fuel cell combination, the position paper notes: matching flow rates and temperatures within the combined cycle; determining how to operate the fuel cell in parallel or series with a DLE (dry low emission) combustor burning hydrogen; and development of strategies for operation over the complete gas turbine operating range.

EUTurbines therefore suggests there is a need for further studies on integration of gas turbines with fuel cells, in particular focusing on performance, cycle choice and matching of sizes and operating temperatures.