Robustness, simplicity, ultra low emissions, dual fuel capability with automatic seamless changeover, small footprint and rapid start up (1 minute to full load) are among the attractions that Dutch company OPRA (Optimal Radial Turbine BV) is claiming for its OP16 all-radial gas turbine. Now in production it is rated at 1.5-1.8 MW, with potential future increase to 2 MW, and targeted at the distributed generation sector. 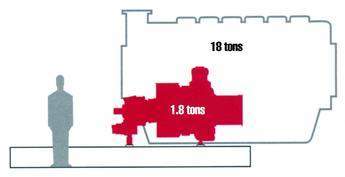 Following completion in autumn 2003 of a 400 hour field qualification test at the Ruhrgas test facility in Dorsten, Germany, OPRA reports it has started series production of its OP16 radial gas turbine. Two machines have been delivered to Fairbanks Morse Engine, Beloit, Wisconsin, which has an exclusive agreement for packaging, distribution and sales of the OP16 in North America.

The remaining three turbines of this first production run will be packaged by OPRA and installed with customers in Europe during 2004.

The main applications envisaged for the OP16 are industrial cogeneration for medium sized process industries, remote power production for oil and gas installations using associated gas, and CHP systems for facilities such as hotels, hospitals and greenhouses. Replacement of reciprocating diesel and gas engines is seen as a key potential market. OPRA has also identified what is sees as two “potentially dominating market factors”: the need for ever lower emissions; and a growing demand for distributed generation, notably in “inside the fence” CHP applications and in developing countries.

The Dorsten field tests, carried out in co-operation with RWE, and employing a Piller generator, demonstrated an efficiency of 26.2%, gearbox shaft output at maximum continuous load of 1860 kW, (ISO conditions), NOx emissions consistently below 5 ppmv (corrected to 15% O2) with CO and UHC at single digit levels.

The OP16 is a direct descendant of the well established KG2 radial gas turbine, developed by OPRA CEO Jan Mowill, who created Kongsberg turbines in Norway. More than 1000 KG2 generating packages were sold between 1970 and 1985 and this radial gas turbine has now amassed more than 15 million operating hours.

The OP16 has retained the simple and robust design of the previous engine but has undergone major improvements in terms of performance by means of advanced aerodynamics and materials technology. In particular, the engine is equipped with the patented COFAR™ (Controlled Fuel Air Ratio) combustion system, which provides ultra low emissions over the entire normal operating range, on both liquid and gaseous fuels.

A key feature of the OP16 is the short stack-up of the centrifugal compressor and radial turbine, making it feasible to use a convenient cantilevered rotor suspension.

The 6.7/1 pressure ratio centrifugal compressor is much more compact than a multistage axial design that would be required to achieve the same pressure rise. The latest compressor configuration builds on an advanced NASA development.

The high-expansion-ratio OPRA turbine stage has been aerodynamically refined to achieve an efficiency of 90%.

The radial machine is akin to the Francis type turbine, which is extensively used in hydro plants. More conventional radial turbines are used in small scale turbochargers, but mainly due to their low manufacturing cost.

Another feature of the radial turbine, as used by OPRA, is its extraordinary robustness and insensitivity to factors causing corrosion, fouling and performance degradation.

The upper photograph above shows a radial turbine with 33000 h of service on an offshore platform. After cleaning, the exceptional as-new condition of the rotor is revealed. The engine had experienced large quantities of seawater in its liquid fuel, which is generally difficult for turbines to digest. The rotor was returned for further service after cleaning.

The Eiffel-tower-like cross section of the radial turbine impeller, featuring a strong base and a lighter tip, allows a high turbine peripheral speed while maintaining acceptable stress levels. Thus the difference between the velocities of the combustion gas and blades is relatively small, greatly reducing the stagnation temperature (Space Shuttle re-entry effect) and the associated turbine metal temperature. A temperature gain of up to 100°C so obtained obviously has great significance for both turbine life and performance.

This approach to turbine design, combining the laws of physics with the special OPRA turbine configuration, obviates the intricate, sensitive and costly blade cooling required in conventional engines using axial turbine blades (although engines above a few MW cannot conveniently use the radial concept).

The OPRA all-radial design could be described as possessing “sophisticated simplicity”. The rotor arrangement combines the heavy duty tilting pad bearing adjacent to the compressor, taking most of the radial load, with a ball bearing suspension system in front to take the combined axial and radial load. This design substantially reduces frictional losses whilst maintaining the heavy duty load carrying capability of a journal bearing system where it is needed.

Experience with different rotor suspension systems has shown that the avoidance of bearings and associated oil systems in the middle of and in hot locations of the engine has a major effect in assuring reliability, reducing the overall cost and virtually eliminating lube oil consumption, OPRA says.

Another area where the OP16 differs a great deal from other turbines is in the combustor design. Low emissions capability was an integral part of the engine design from the outset. This meant that film cooling of the combustor liner was neither needed nor permitted, as this would allow “false” air into the combustion process. The liner is therefore cooled by a combination of convection and impingement. This, in turn was possible since the temperature of the lean burning flame is some 500-600°C (932-1112°F) lower than is generally found in conventional burners. This design also promises essentially unlimited life of the combustor liner.

The patented COFAR™ system controls the combustion over the entire operating range and allows a high degree of flexibility in adapting to different fuels. The choice of an annular combustor eliminated the need for a special turbine inlet collector as well as providing additional volume to minimise unburned fuel as well as CO.

The achievement of stable combustion in a lean burning system is very challenging, involving complex acoustic conditions. However, the OPRA approach involves simple, passive solutions avoiding so called “staging”. This has resulted in an exceptionally clean and smooth running engine, OPRA reports.

Most of the combustion development on the engine was done using diesel fuel No 2, with the aim of finding a way to supply clean power to customers not having access to a gas infrastructure. The following, extraordinarily low, emission levels have been achieved with this fuel: 20 ppm NOx; 5 ppm UHC; and 2 ppm CO.

The 6.7/1 pressure ratio of the OP16 was selected as an optimum to achieve a high simple cycle shaft efficiency for this size of machine, namely 26%. This pressure ratio also reduces the need for fuel gas boost compression to as little as 9 bar.

This pressure ratio is also convenient should a recuperator be added. Such a recuperated version would yield a shaft efficiency of 38%. However, the simple cycle version, with its higher exhaust temperature, would be the preferred option for CHP.

Due to the simplicity and the inherent manufacturing cost advantage of the OP16 the overall package can “afford” the addition of a recuperator and still maintain an attractive price level.

The reduction gearbox is a proprietary OPRA component, designed and manufactured exclusively for OPRA by ZF, who supply Mercedes and BMW transmissions. The gearbox has an input of 26000 rpm and optional outputs of 1500 and 1800 rpm. Direct drive generator systems, often used with microturbines, were rejected, for reasons of cost and efficiency .