The Government of India has approved the participation of the private sector in the generation, supply and distribution of electricity in the country in order to overcome anticipated power shortages. Robert Goldsmith reports on how this has affected the development of hydro in the state of Sikkim 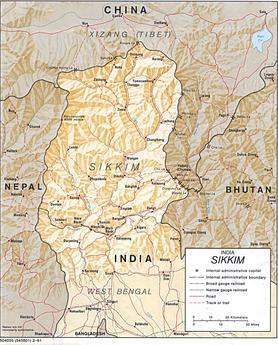 The power system in India has grown from small, isolated stations serving limited consumers in and around large cities, into large regional power grids. By March 2003 the generating capacity had grown to 107,900MW. The power load demand of the country is continuing to increase at a very rapid rate and both hydroelectric and thermal (including nuclear) power potential in the country is being developed to meet the overall requirement.

For the purpose of system planning and operation, the country has been divided into the following five geopolitical regions: Northern, Western, Southern, Eastern and North-Eastern regional power grids and the transmission system is progressively being inter-connected for efficient operation of these five regional grids.

The objective of the system development is to evolve a self-sufficient regional grid catering to the individual regional power demands. It is also aimed at achieving the maximum benefits from integrated operation, through a proper mix of thermal and hydro generation, and ultimately to tie the five regional grids together to form a strong National power grid, providing even greater reliability.

India has a hydro power generation history of more than 100 years, but hydro contributes only about 25% of the total power scenario of the country, tapping only 26,910MW of its total identified potential of 84,044MW. Looking to the future demand, it has become imperative to tap this vast remaining resource.

In order to meet the ideal hydro-thermal mix of 40:60, the Prime Minister of India launched a hydroelectric initiative on 24 May 2003 to develop 50,000MW of hydro potential in the country. Accordingly, based on the results of preliminary ranking studies carried out by the Central Electricity Authority (CEA), 162 hydroelectric schemes with an estimated installed capacity of 50,560MW were selected in 16 states for the preparation of Preliminary Feasibility Studies (PFR). The Panan hydroelectric project in the state of Sikkim in the Country’s Eastern region is one of such schemes identified.

The Eastern region comprises the states of Jharkhand, Bihar, Orissa, West Bengal and Sikkim. The region has a total power potential (installed capacity) of 16700MW, with hydro potential estimated at 10,950MW identified, but only 2357MW (21.5%) developed. Thus, the hydro-thermal mix is far below the national average of 25:75, and the desirable ratio of 40:60.

The power and energy requirement and availability by the end of the 10th Five-Year Plan in 2006-07 in the Eastern region is summarised in Table 1, as published by CEA.

Even considering the coordinated operation of existing hydro and thermal stations, as well as benefits from ongoing projects and from the schemes cleared by CEA, the Eastern region is expected to face peak power and energy deficits during most of the 10th FiveYear Plan. The power situation in the region is dynamic and it is expected that the power generated from hydro will be cheap and helpful to the region in comparison to thermal and other more expensive power supply sources.

The hydro power potential of Sikkim state has been identified as 4286MW. The first micro hydro station in Sikkim was established on 27 May 1927 on the bank of Ranikhola at Lower Sichey Busty with an installed capacity of 50kW. The project was developed to meet the needs of the Royal Family and Gangtok Town. This was further augmented in the year 1935 by the addition of a 60kW generating set. Later, the Government of Sikkim developed the Lower Lagyap hydro project with an installed capacity of 12MW.

More recently, the state Energy and Power Department facilitated the development of private hydro power by establishing the Sikkim Power Development Authority (SPDA), which in turn commissioned the National Hydro Power Corporation (NHPC) to prepare a suite of Pre-Feasibility reports with a cumulative total of 1500MW. Based on these reports the SPDA has released a number of schemes for private development based on power scenario and optimisation of particular river basins to increase hydro production in Sikkim.

Sikkim is dominated by the Teesta river, which rises in the northern boundary with China from glaciers fed from the high Himalayas. There are six Teesta river hydroelectric projecs in the grand plan, with Teesta 5 under construction by NHPC and two other schemes at the feasibility stage. Main tributaries of the Teesta are the Zemu Chu, Lachang Chu, Tolung Chu and Rangpo Chu. There are at least 22 schemes that have been studied to prefeasibility stage. It should be noted that these reports are very brief only and few of the sites were actually visited. Thus some schemes have required and will require extensive changes during the DPR stage.

Presently, hydroelectric schemes totalling 95.7MW are operating in the state as shown in Table 2.

A new scheme in development is the proposed 280MW Panan hydroelectric project located in the North district of Sikkim. Essentially a run-of-river scheme, it utilises the water of the Rangyong river, a tributary of the Teesta river. It will generate 1188GWh in the 90% dependable year with 95% machine availability. The energy generated by the project will be fed to a pooling point near the Teesta – III project, approximately 2km from Panan, through one 220kV DC line.

The intake site is located near the village of Lingza on the Mangan – Lingza road and the power house at the confluence of Tolung Chu and Teesta river near Panan village. All working sites will be accessable by a well connected road network.

This 280MW project was commissioned by Nagarjuna Group, a company based in Hyderabad and mainly in the business of sugar milling. A separate development company, Himagiri, was set up to implement the project.

The Panan scheme was investigated by consulting firm SMEC International. During 2005 the scheme was advanced to a bankable feasibility stage, or detailed project report (DPR). This process has involved:

• Evaluation of mechanical and electrical installations.

The typical DPR contents are shown in Table 3.

The SMEC study has resulted in a simple run-of-river scheme located about 10km up the Rollung Chu in North Sikkim about 50km NW of Gangtok. The salient features of the project are shown in Table 4.

The main challenges for this project are the geological setting. The dam site is in sheared gneiss and schist with interbedded quartzite and phyllite. The youthful valley has been cut deeply into these metamorphic rocks and deep colluvial and glacio-fluvial deposits are characteristic of the valley sites. The geological investigations, supported by the drilling, indicate that up to 50m of unconsolidated deposits affect part of the dam foundations. The headrace tunnel is however likely to be in relatively sound rock with an infrequent occurrence of major faults or thrust zones. The power station site is to be located at the back end of an alluvial terrace which deepens quite dramatically to 60m depth beneath the Teesta river. The site for the power house is at the foot of the rock slope and thus the depth to suitable rock foundation is manageable. The hydrology data is based on five rain gauge stations.

Power potential studies indicate that the power station can be run for six hours a day producing firm peaking power. It is planned to deliver annually 1140GWh of electrical energy to the national power grid with a 90% reliability of which 542 GWh will be available during the six hours of peak demand and 598GWh from the remainder of the day.

SMEC has submitted the DPR to the client. The process is now to obtain clearance from the SPDC and Government of Sikkim for this bankable feasibility study and to enable the private developer to move to the next stage – detailed design and construction. Options for this stage are: tender design, detailed engineering and design and construction under direction from an owners engineer, or engineer-procure-construct (EPC).

Another project SMEC is involved in is the Rongni Chu hydro power project. This project is being developed by Chhattisgarh Electricity Company, a steel producing company, based in Raipur. The PFR indicated that a 170m high dam would be required, with facility for a 60m drawdown and 195MW installed capacity. However after a site visit for an early due diligence study, SMEC recommended a much reduced dam size to minimise inundation and also to change the emphasis to a peaking power scheme.

In contrast to the Panan scheme, the Rongni project involved transferring the water from the Rongni Chu to the Rangpo Chu via a 11.7km long headrace tunnel. The power station is planned to be located on the surface and with a tailwater discharge into the Rangpo Chu just 3km upstream of its confluence with the Teesta river. The installed capacity was optimised to 96MW after an assessment of alternatives ranging from 80MW to 120MW.

Concern has been expressed over the length of the headrace tunnel at 11.7km and an option to re-configure the scheme as a run-of -river layout with 6 to 7km long tunnel and a power station further downstream in the Rongni Chu was assessed. These options were soon realised to be not feasible due to the poor sites for a power station, the minimal head and the associated poor power potential.

Main challenges with the selected layout are the discovery of an ancient river channel, now filled with alluvial gravels, through the left abutment of the dam, the need for a surface sedimentation basin, the long headrace tunnel through schists and quartzites, access roads in steep terrain to reach adit portals for the tunnel construction and the tight location for the power house at the base of a ridge on the right back of the Rangpo Chu. Details of the project are shown in Table 5.

From the growth of peak demand and anticipated installed generation capacity, it is observed that the Eastern region will have energy growth requirements at the rate of 10% per annum. The most important source of power development in the Eastern region is its hydro potential located in Sikkim. Priority should be given to the development of these untapped resources because they offer a reliable source of energy and provide instantaneous load acceptance/rejection suitable for peaking power. In 2004 22 hydro projects amounting to 4672MW (PFR estimates) were allotted by the Sikkim Government. Of these 22, SMEC has been involved in Panan, Rongni Chu, Teesta 1, Teesta 6, Rolep and Junathong.

Thanks are given to Andreas Neumaier for his assistance in preparing this article.