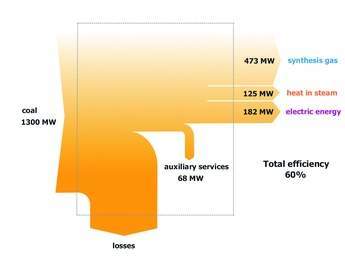 The hope is that the project will attract funding from the EU as an IGCC+CCS demonstration project and serve as a reference polygeneration project for the furtherance of clean coal technology in Poland and elsewhere.

The location of the proposed power and chemical project is adjacent to the Kedzierzyn chemical plant. The expected benefits would include reduced emissions, high utilisation of primary energy and good economics.

The project is presently the subject of a feasibility study, so details may change but the plant as currently envisaged (Figures 1 and 2) would consist of the following:

• A coal gasification plant (A1 in Figure 1) producing synthesis gas for chemical production (methanol and hydrogen) as well as high pressure steam for production of electricity and heat. The flow scheme includes CO shift and process gas purification units (A2 in Figure 1), including CO2 capture facilities.

• A second coal gasification plant (B1 in Figure 1) integrated with gas and steam turbines in an IGCC (integrated gasification combined cycle) configuration (B2 in Figure 1), including CO2 removal before combustion of the syngas in the gas turbine of the IGCC system (B3 in Figure 1).

• A carbon dioxide transport and storage system serving both the syngas production and the IGCC facilities.

In addition the demonstration polygeneration plant would be integrated with a conventional CFB (circulating fluidised bed) based heat and power plant. This system is to ensure a reliable supply of process steam for the chemical works and of hot water for the district heating system of the municipality of Kedzierzyn-Kozle.

The CFB CHP plant would also produce electricity to power auxiliary systems in the polygeneration plant.

The gasification reactors (A1 and B1 in Figure 1) will be of identical capacity and therefore able to act as a reserve for each other, increasing the availability of both synthesis gas and electricity production systems.

Steam generated in the synthesis gas production system (A1) is supplied to the steam turbine of the conventional, CFB, power plant (see Figure 1), resulting in reduced coal consumption.

The basic fuel for both gasifiers is fine coal from the Janina coal mine, which belongs to Poludniowy Koncern Weglowy – a subsidiary company of PKE. This guarantees reliable deliveries. Mining plans also confirm the availability of sufficient coal to meet the requirements the new polygeneration plant.

Figure 3 shows the energy balance for the polygeneration plant.

Co-firing of biomass (up to 20% by energy input) is planned in the CFB CHP plant and in the IGCC.

The carbon dioxide to be sequestered is separated both in the synthesis gas production system (A) and in the IGCC (B).

In carrying out the process of synthesis gas production CO2 separation is required in order to obtain a gas composition suitable for further processing. A byproduct consisting of carbon dioxide of 99% purity is produced, which can be a commercial product or can be stored. In such a case the costs associated with CO2 reduction are limited to compression, transport to the storage site and underground storage. There are no additional separation costs which are usually high for post-combustion modes

In the case of methanol produced from synthesis gas, so-called “chemical sequestration” takes place in the course of which a part of the CO2 (about 23%), that would be otherwise emitted to the atmosphere, is stored in the final product ie the methanol, a molecule of which contains almost 40% carbon (by weight).

CO2 formed in the process of gasification in the IGCC system is separated from the process gas before combustion. Because of the considerably smaller gas volume (and higher CO2 concentration) in relation to the quantities of flue gas in a conventional pulverised coal combustion system, the separation takes place with considerably higher efficiency and relatively low operating costs. Taking into consideration the total amount of carbon in the input fuel for both gasification systems, the overall CO2 capture level will be over 92%. This includes both the carbon dioxide for underground storage and the CO2 equivalent “stored” in the methanol produced as a final product of synthesis gas processing.

It is assumed that pumping of CO2 underground will start directly after achieving the full production capacity of the separation facilities. The increase in pumped CO2 over subsequent years is shown in Figure 4.

The balance of carbon in both integrated systems is shown in Figure 5.

The proposed polygeneration plant would be located some distance from the main geological structures of the Mesozoic basin that could be appropriate for CO2 underground storage.

On the basis of geological documentation, the following rock structures and areas that could be potentially used for CO2 underground storage have been selected (Figure 6):

• An area located approximately 120 km north of Kedzierzyn Kozle. There are Jurassic deposits connected with a large geological structure called the Middle-Polish Farrow. The roof of the deposits is at a depth of about 750 m. Estimated minimum storage capacity: 30 million t of carbon dioxide.

• The area of Czestochowa, about 110 km from Kedzierzyn Kozle. There are Jurassic deposits connected with the Middle-Polish Farrow with good reservoir parameters. The roof of the deposits is at a depth of 400-500 m. Estimated minimum storage capacity: 17 million t of carbon dioxide.

• An area about 80 km from Kedzierzyn Kozle. There are Triassic deposits at a depth of less than 1000 m, which after detailed investigations and gathering of additional data could be qualified as underground storage locations. Minimum storage capacity: not yet estimated due to lack of data.

• An area 110 km north of Kedzierzyn Kozle, again where there are Triassic deposits. Minimum storage capacity: not yet estimated due to lack of data.

The selection of places for underground CO2 reservoirs, in accordance with the EU Directive on underground storage, requires detailed investigations of geological and hydrological conditions, geophysical investigations, modelling of pumping processes and expected physical and chemical reactions, as well as extensive efforts in gaining social acceptance of the project.

The locations mentioned above should be regarded as preliminary ideas requiring further detailed studies.

The schedule for implementation of the project (Figure 7) is estimated to be 84 months, with the following main stages:

• construction of polygeneration plant with carbon dioxide capture, transport and storage; and

In addition a further 48 months of research and development (2016-2019) is envisaged for optimisation of the plant as a whole and achieving design performance, in particular for the following systems:

• gas turbine of the IGCC with increasing hydrogen content in fuel gas;

Advantages of the project

The proposed polygeneration plant would be one of the first projects in the European Union to apply coal gasification processes to the integrated production of electricity and chemical products. In combination with CO2 sequestration it would constitute a unique application of technologies for addressing greenhouse gas issues. Implementation of the project would significantly contribute to achieving the objectives of the EU Flagship Programme, which aims to demonstrate a range of technologies for CCS.

The fact that the Polish power industry is based on coal makes Poland responsible for 20% of all greenhouse gases emitted in Europe and an improvement in this situation is urgently required.

The proposed approach consists of gasifying coal in order to obtain synthesis gas, which is a valuable alternative to natural gas as a raw material for the chemical industry and for power plants operating combined cycles. The composition of the gas can be adjusted to meet the requirements of both the chemical industry (production of methanol, hydrogen etc) and power producers using gas turbines in an IGCC configuration.

As well as achieving high efficiency through cogeneration the plant will also use renewable fuel in the form of biomass. And as well as reducing carbon dioxide emissions the polygeneration plant will also achieve a radical reduction in sulphur dioxide and NOx emissions.

The successful accomplishment of the project will also contribute to the solution of a key problem facing Poland: finding a safe storage place for the large amounts of carbon dioxide generated in Upper Silesia.

A primary consideration in selecting the basic power plant configuration has been reduction of risk. This has been addressed in the following ways:

• Technological risk has been reduced by selecting proven IGCC technology.

• Location of the project in an area of existing industrial and power generating infrastructure.

• The investment case is independent of the method finally selected for CO2 sequestration.

• Commercial risk can be reduced by adjusting polygeneration products to meet demand.

• A flexible approach is taken to adjusting gas composition to meet the requirements of developing chemical technologies.

• The financial risks are reduced by making use of existing mechanisms to promote renewable energy production and cogeneration and taking into account expected legal regulations concerning emissions of CO2 and other pollutants, while, as far as possible, making the profitability of the investment independent of as yet unknown legal details concerning the implementation of the CCS Directive in Poland.