Playing it safe in Central Asia

Many of Central Asia’s ageing large dams are located in the basins of transboundary rivers. The United Nations is leading an initiative to promote the safe operation and management of such structures in the region. Bo Libert, Erkin Orolbaev and Yuri Steklov give more details 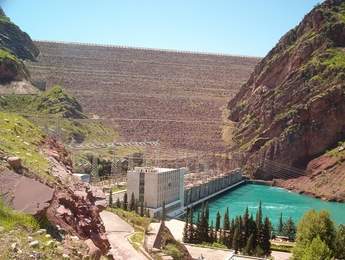 The United Nations Economic Commission for Europe (UNECE), in particular through its Convention on the Protection and Use of Transboundary Watercourses and International Lakes, is engaged in promoting cooperation on the management of shared water resources in Central Asia. This is a precondition for sustainable development in the subregion. One direction of activities is promoting the safe operation of dams and other large water management structures.

Large dams represent a very important segment of the water management infrastructure of Central Asia. According to icold classification, out of more than 1200 dams in the region, 110 are large dams. Many of these are located in the basins of transboundary rivers such as the Amu Darya, the Syr Darya, the Ili and the Irtysh. One of the world’s highest dams, the 300m tall Nurek Dam, is located on the Vakhsh River, a tributary of the Amu Darya in Tajikistan.

The economic hydro power potential [2] in Central Asia is estimated at 400B kWh annually, 10% of which is exploited. The region could cover more than 70% of projected electricity needs by hydro power. The main part (about 90%) of this hydro potential is found in Kyrgyzstan and Tajikistan. In these countries, new hydro power stations are being constructed, one example being the Rogun station in Tajikistan on the Vakhsh River. With a 335m high rockfill dam and a water volume of 13.8km3, Rogun is designed to have an installed capacity of 3600MW [3]. In Kyrgyzstan, the Kambarata-1 hydro power station on the Naryn River will be 275m high and have a water volume of 4.65km3. The projected capacity is 1.9MW.

Many of the dams in Central Asia were built 40 to 50 years ago, and due to limited resources for their maintenance and the inadequacy of a legal framework for their safe operation, the risk of accidents is increasing. With a couple of exceptions there are also no established procedures for notification of co-basin countries in the case of accidents or emergency situations. With dams on the transboundary rivers criss-crossing the region, the failure of a dam could have disastrous consequences in densely populated downstream regions and countries.

In response to a request by countries in Central Asia that this important issue be addressed, UNECE and the United Nations Economic and Social Commission for Asia and the Pacific (UNESCAP) started the project, Capacity-Building for Cooperation on Dam Safety in Central Asia in 2006. Funding was provided by the Government of Finland. The project is a contribution to the implementation of the Cooperation Strategy to Promote the Rational and Efficient Use of Water and Energy Resources in Central Asia [4]. The Strategy has been developed and adopted under the United Nations Special Programme for the Economies of Central Asia (SPECA).

The project’s phase I, completed over nine months by the end of 2006, aimed to prompt the countries first to consider setting up or revising national dam safety regulatory frameworks to achieve their harmonisation; and secondly to pursue regional cooperation on information exchange and notification in the event of accidents or emergency situations with dams. This resulted in two major outcomes:

• A model national law on safety of large hydraulic facilities, including dams, intended to be a base of national harmonised legal frameworks for dam safety.

• A draft regional agreement on cooperation on dam safety, which stipulates, inter alia, the exchange of information and the notification of other countries in the event of accidents with dams.

In the first project phase, national reports on the issues related to various aspects of dam safety were prepared for each country. Then, on the basis of these reports, a publication on dam safety in Central Asia was issued [5]. The publication covers the current national legal, institutional and financial modalities in the area of dam safety, the existing cooperative arrangements in that sector, as well as the model law and draft regional agreements. It also contains a list of large dams in Central Asia, updated for the first time since the end of the 1980s.

The second three-year project phase started in 2008, with renewed funding from Finland and co-funding from the Russian Federation. UNECE is responsible for project implementation in close cooperation with the executive board of the International Fund for the Saving of the Aral Sea (EC-IFAS).

The project’s objective is to improve the national legal and institutional frameworks as well as to set up regional cooperation mechanisms on dam safety in Central Asia. Project activities in four areas support the countries in terms of developing:

• National regulatory frameworks for dam safety, building on the model national law developed in phase I.

• The necessary documentation and technical capacity for harmonising technical regulations and procedures for the monitoring and evaluation of dam performance.

• Improved access to potential sources of technical assistance for rehabilitation of dams and improvement of monitoring and early warning systems.

In all of the participating countries, some action has been taken to formulate legislation on dam safety, or to improve the existing regulatory framework [6].

The draft of a national law proposing incorporation of amendments related to the safety of hydrotechnical structures in the national Water Code has been reviewed within the framework of the project. As a result, the draft law has been revised. More changes in the national legislation are however required to adequately handle safety issues. An important step towards strengthening of the legislation in this sector was made with the approval of national rules for the safety of water management systems and structures by the Government of Kazakhstan on 12 May 2009.

A law on establishing a dam commission as a national regulator for the safety of large hydrotechnical structures was recently drafted through a World Bank project. It will be reviewed by the UNECE project, taking into account the draft model law.

A first draft of a national law on dam safety has been prepared with reference to the project’s model national law. However, more efforts are required to initiate the process of law formulation. A national seminar on dam safety is planned for late 2009 which would help trigger the process.

Participants at a national seminar on dam safety in 2008 realised the necessity of having a national law on the safety of hydrotechnical structures. Subsequently, a draft law was prepared along the lines of the model law, but the draft needs revision to comprehensively reflect the specifics of water infrastructure management in the country. It is anticipated that assistance from the project will be requested to finalise the draft law.

Upon reviewing recent changes in Russian legislation on the safety of hydrotechnical structures presented at a national seminar on dam safety in 2008, Uzbek authorities initiated a revision of the national law on the safety of water management infrastructure adopted ten years ago. The draft national law containing provisions aiming to improve the existing law was prepared by the State Water Control Facilities Committee (the country’s national regulator in this sector) in consultation with other concerned ministries and agencies for submission to the Parliament.

The review of the proposed changes, along with recommendations for improving the draft, was made by an international expert affiliated with the UNECE project. The legal act proposing amendments to the national law is in the approval process.

This work has received a significant push from complementary funding from the Russian Federation, which has made it possible to engage the Centre on Safety of Hydrotechnical Structures (Moscow), Association Hydroproject (Moscow) and the Vodoavtomatika Institute (Bishkek) in the activities. With a view to proposing a model set of uniform technical norms and regulations, a list of legal acts and technical documents used in the Russian Federation for regulating the safety of hydrotechnical structures, plus similar lists for all five Central Asian countries, have been prepared and analysed.

On this basis, a draft set of documents has been proposed, and the idea of preparing a model technical directive, comprising both model law provisions and some technical norms, has been discussed. The proposed approach is likely to speed up the revision and introduction of a regulatory framework in the Central Asian countries. The outline of the model technical directive has been prepared and submitted to all the Central Asian countries for comment.

The development of an agreement on cooperation in the field of dam safety in Central Asia has continued. New drafts from 2008 have been discussed at regional and national meetings and circulated to relevant ministries in the countries. A draft charter for each of the proposed alternative bodies for cooperation, namely an international commission or a regional centre on the safety of hydrotechnical structures, has been prepared.

A new draft incorporating most of the changes and amendments proposed by countries was distributed in October 2009 to the five governments for approval.

Challenges for the future

There are significant challenges for future work on dam safety in the region. Obviously, there is a need to increase the efforts at the individual installations to make sure that the technical standards are followed, and that proper measures are taken to make sure that the risk of accidents does not increase with the ageing of dams. On a national level, it is important that national legislation and the institutions responsible for controlling the safety of hydrotechnical facilities are developed in all countries. Training of staff responsible for dam safety is a very important direction of the work, one which urgently needs to be developed. At a regional level it is important that a platform, such as a commission or centre, is established for the five countries to discuss technical issues and cooperation on dam safety.