In addition to their application on some dam upgrades in France, Piano Key Weirs are being increasingly researched as well as employed on new projects in Vietnam. Report by Patrick Reynolds 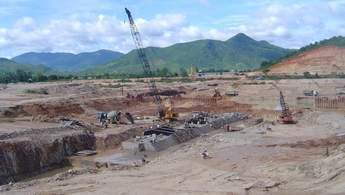 A number of Piano Key Weir (PK Weir) spillways are under construction in Vietnam to function in conjunction with other structures, such as gates. A range of collaborative research is also underway in the country to explore further applications, for example working in combination with stepped faced on RCC dams to increase energy dissipation.

PK Weirs spillways have recently developed out of the field of short, labyrinth-type hydraulic structures. The concept was presented almost a decade ago by Lemperiere and Ouamane, and, following some years of concept development, the first PK Weir was installed four years ago, at Goulours dam in France, by Electricite de France (edf).

Interest in PK Weir spillways is increasing internationally, reflected in increased research and applications. Next February, an international workshop on labyrinth and PK Weirs will be held in Liege, Belgium, and will include a visit to a hydraulics laboratory and a technical tour of works at some EdF dams.

However, it will be clear that while the conference has a European platform, Vietnam is also growing in importance with regards to both projects and research. Two new dams are under construction in the country with PK Weirs – Van Phong and Dakmi 2 – and there are two more in design – Ngan Truoi and Vinh Son 3. A PK Weir is also involved in Lower Sesan 2 hydro project. In terms of research, there has been work that goes beyond the challenge of combined use of PK Weirs with gated spillways on gravity dams to examine their utilisation with stepped spillways in RCC dams.

A key contributing agency to the early, and ongoing, research is Hydrocoop, a non-profit association of experts in spillways, floods and sedimentation.

In terms of spillway design, a PK Weir is a variation on a labyrinth spillway. Both are simple structures but hydraulically complex, the PK Weir even more so.

Measured along a dam axis, both types of weir are relatively short. However, with their ‘folded’, or zig-zag, geometries (as viewed on plan), they offer longer crest lengths to pass a flood. Consequently, they offer hydraulic solutions to achieving significantly more flood discharge capacity without the need to widen a dam or the top chute at existing structures. At new structures they can also offer relatively compact solutions with high discharge and low overflow depth.

What is different between general labyrinth and PK Weir is that the former consists of interlocking vertical walls that require a wide footing area, and which needs either a bigger bite out of an existing dam or a larger new dam for that section, whereas the latter does not – a smaller footprint solves the need. It also is more efficient.

A PK Weir is a major evolution in weirs as it is a self-balanced structure, with no mechanical components, that sits on a small foundation and can be either built from precast concrete or prefabricated steel. It is able to achieve the high crest length to low foundation area ratio by employing an alternating sequence of overhanging channels – either upstream and downstream, or upstream only but by a much longer distance – and chutes to receive the spilled water.

The channels then act as alternating ponds and chutes. In these serrated, free-flow structures, the majority of water spills over the long sides of the pond channels and falls onto chutes to be discharged down the main, or a supplementary, spillway. It is this run of chutes and channels that has won this type of weir the moniker of ‘piano key’.

Lemperiere and Ouamane initiated the development of PK Weirs by discussing the footprint restriction of labyrinth weirs despite the benefit they could bring of providing greater crest length and consequently higher specific flows, and the possibility of also allowing for greater live reservoir storage compared with gated spillways. Research moved forward in the late 1990s through Hydrocoop, and hydraulic laboratory tests were performed in France, India and Algeria.

The PK Weir can pass at least four times the specific discharge of a classic (Creager) weir for a relatively low overflow depth. Specific flows range from 3m3 per m to 100m3 per m, say designers.

The projects under construction or in design in Vietnam that feature PK Weirs include:

The Van Phong barrage is a 475m long, 18m high reregulating structure under construction on Song Con River in Binh Dinh province in the centre of Vietnam. It will also have a 6MW powerhouse in the right abutment. In addition to its central, 172m long spillway with 10 radial gates, the barrage will also have PK Weirs of 121m and 181m lengths, respectively. The design flood event is 15,350m3/sec and the maximum combined design discharge of the PK Weirs is 8700m3/sec.

The PK Weirs were selected as part of the project design as they can spill a significant discharge for a low nappe depth, which fits the site constraint of there being low allowable upstream water level, says researcher Michel Ho Ta Khanh, adding that the combination is better than solutions with either all gates or flaps gates.

Dakmi 2 is a multipurpose scheme with irrigation and hydro features (98MW) under construction on the Dakmi River in Quang Nam province. The dam is a 38m high, 145m wide concrete gravity structure in a narrow valley with a high flood discharge.

The dam has been designed with a 31m wide, central gated spillway, and 37.5m wide PK weirs on each side of the structure. The maximum discharge capacity of the gates spillway is 3000m3/sec and combined capacities of PK Weirs is 3440m3/sec, and together they are designed to pass a on 1000 year flood of almost 6500m3/sec.

Khanh notes that the PK Weirs were chosen for the same reasons as on the Van Phong project, but adds that the Dakmi 2 dam also has a stepped spillway for increased energy dissipation. In addition, the design avoids the need for extensive excavation on the steep left bank and also provides for good aeration of the overflow, which minimises the size of the stilling pond.

A 96m long PK Weir with a discharge capacity of 1126m3/sec is to be built on the right bank of the Ngan Truoi irrigation barrage, presently under design for construction in Ha Tinh province. The design flood for the project is almost 2500m3/sec, and the barrage will also feature a 72.5m long spillway with five radial gates on the left bank.

Under design for construction in Binh Dinh province, the Vinh Son 3 hydro project may feature a PK Weir in its flood discharge capability.

The PK Weir is being explored as a non-gated and less expensive alternative in capital and operating cost terms.

The Lower Sesan 2 hydro project is being developed as part of a larger scheme with Sesan 5 on the Vietnamese-Cambodian border. Construction is due to start in 2011.

A combination of PK Weir and gated spillway is often the optimal solution for passing floods at dams, as indicated by these studies in Vietnam, says Khanh, who has been working for more than five years with Vietnamese engineers and with the support of Hydrocoop on such work and research.

Earlier this year a paper he co-authored with Dr Truong Chi Hien, on combining PK Weirs and stepped spillways, was given at the icold meeting in Hanoi. Khanh explains that tests with PK Weirs have been carried out in the hydraulic laboratory of the HCM City University of Technology. The tests have looked at: different characteristics and performances of shapes and sizes of PK Weirs; energy dissipation through analysing 2D and 3D stepped spillways; scour at the dam toe; and comparing different types of weir and the down stream face of the spillway.

Principal conclusions from the research are: that RCC dams in high narrow valleys prone to high flood discharges could benefit from the combination of PK Weirs and stepped spillways, enabling shorter stilling basins to be built; and, that while PK Weirs can help reduce scour the contribution may be significant only for the lower spillway chutes.

To confirm these findings, and examine how to optimise using both PK Weirs and stepped spillway, more research is required, says Khanh.

The international workshop on labyrinth and PK Weirs to be held next year will be at the University of Liege, Belgium, on 9-11 February. For further information, please contact: Sebastien Erpicum, Université de Liège, HACH, Chemin des Chevreuils, 1 B52/3, 4000 Liège, Belgium. Email: pk-weirs@ulg.ac.be Website: www.pk-weirs.ulg.ac.be