Perkins adds to its 4000 Series

Anew 30 litre, 8 cylinder air-to-air turbocharged diesel engine has been added to the well known Perkins 4000 Series range. The 4008-30TAG ElectropaK is to meet the key power supply points from 900-1250 kVA for prime and standby ratings at 50 Hz. 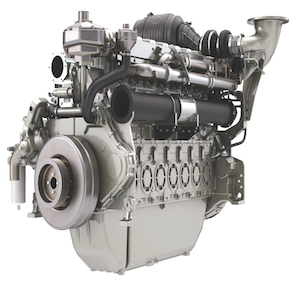 The new engine, says Perkins, will keep the reliability and performance of the current 4008TAG range but at an increased power rating 1250 kVA – an output usually expected from a 12 cylinder engine.

The smaller and lighter engine lowers installation and logistics costs while delivering up to an 8% improvement in fuel consumption, says Perkins. The new 4008-30TAG also extends the capabilities of the current 4008 range, enabling it to perform without derating, at up to 3000 metres elevation. "This is a powerful package which gives generator set manufacturers the benefit of more power from a smaller engine," said Simon Gray, electric power marketing manager.

The 4000 Series comes with a warranty of one year unlimited hours, or two years/ 6000 hours in prime power mode or three years (up to 500 hours per year) as standby.