Pathfinding in Korea and China 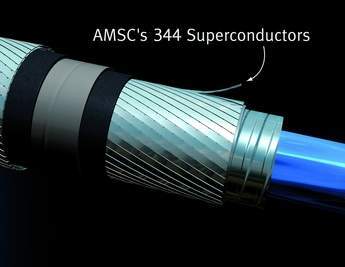 Since the late 1980s, the potential economic savings achievable through the application of high temperature superconductor (HTS) electric motors, transformers, fault current limiters, generators and underground cables has been well documented. Superconductor power cables, in particular, are a huge near-term potential market in light of the fact that a large portion of the 20th century power system infrastructure is slated to exceed design lifetimes during the next 10-15 years.

The deployment of superconductor transmission and distribution cables in the US power grids operated by American Electric Power, Long Island Power Authority (Figure 1) and National Grid is demonstrating the versatility and reliability – as well as the economic value – of the technology. With the ability to carry ten times as much power through a given right of way while also providing significant efficiency benefits, superconductor technology presents an opportunity to modernise and expand electricity delivery systems around the world.

By replacing copper cables with high-capacity superconductor cables in cities using existing underground tunnels and ductwork, utilities can avoid digging up city streets while also relieving grid congestion and increasing the reliability and security of power networks. These cables can be placed strategically in the power grid to draw flow from overtaxed conventional cables or overhead lines to mitigate grid congestion experienced in urban centres. They also can automatically suppress damaging power surges – by providing a degree of inherent fault current limitation – to create resilient, ‘self-healing’ grids that can survive attacks and natural disasters, making them an ideal modernisation tool for metropolitan power grids.

For virtually all countries, today’s superconductor market drivers stem from the same set of constraints and demands – urban space constraints, right of way difficulties, tunnelling requirements (as for example in London and Berlin where there is a 30 metre requirement) and increased urban demand for electrical supply service, including that derived from renewable sources.

LS Cable has ordered approximately 80 000 metres (50 miles) of 344 superconductors, which is AMSC’s proprietary brand of second generation (2G) HTS wire. The cable system will be nearly a half mile in length, making it the world’s longest distribution-voltage superconductor cable system.

This project builds on the success of Korea’s DAPAS programme, the Development of Advanced Power Systems by Applied Superconductivity technologies, which has provided more than $100 million in funding for the development and commercialisation of superconductor systems. In 2006, LS Cable and the Korea Electrotechnology Research Institute (KERI) successfully tested a 30-metre, 22.9 kV superconductor cable. Then, in 2007, LS Cable and KERI completed testing of a 100-metre, 22.9 kV superconductor cable system. Both of these projects were centred on AMSC’s first generation HTS wire and funded by the DAPAS program.

Meanwhile, in China, AMSC is expanding its strategic alliance with Shanghai Electric Cable Research Institute (SECRI). AMSC is supplying HTS wire that SECRI will use to manufacture a 30 metre long, 35 kV cable system. SECRI is the leading R&D and standardisation institution for China’s wire and cable industry and is one of two centres that test and certify power cables for China. Under the terms of the expanded strategic alliance, AMSC will deliver HTS wire and provide consulting services to SECRI. SECRI will then develop the cable system with support from the local Shanghai government.

SECRI is working toward development of cables for operation at both transmission and distribution voltage levels. SECRI expects the first superconductor cable deployment in China’s power grid within the next few years, eventually leading to widespread adoption of superconductor cables throughout China.

The Korean and Chinese developments discussed above follow several recent superconductor cable deployments in US power grids that have been partially funded by the US Department of Energy. National Grid and American Electric Power (AEP) energised distribution-voltage superconductor cable systems in their commercial power grids in Albany, New York and Columbus, Ohio, respectively, in 2006.

The world’s first transmission-voltage cable system was energised on Long Island in April 2008 (See MPS August 2008). This 138 kV system is now a permanent part of Long Island Power Authority’s primary transmission corridor. At full capacity, LIPA’s power cable system is capable of transmitting up to 574 MW of electricity, and powering 300 000 US homes. Another superconductor cable project is now ongoing with Consolidated Edison in Manhattan with partial funding from the US Department of Homeland Security.

In the US, there is a growing awareness that major investments are needed to update the country’s ageing power grid to enhance efficiency and meet the nation’s increasing renewable energy targets. In recognition of this, the US Department of Energy has identified superconductors as one of the fundamental technologies that need to be deployed to achieve a Smart Grid as defined in the DOE’s Modern Grid Initiative.

Renewables and distributed generation will have a central role as the grid is modernised. But, in order to continue developing renewable resources, the North American electric power grid must be expanded and reconfigured to facilitate the challenge of moving large amounts of electricity over very long distances. The inability of the existing transmission system to move electricity from the renewable resource rich, but often sparsely populated, parts of the country to load centres remains a primary barrier to achieving the ambitious renewable energy goals being implemented around the country. And siting new, multi-state pathways for overhead transmission lines presents significant challenges.

A new transmission option is needed. Superconductor electricity pipelines, which have the unique ability to carry vast amounts of electricity from remote renewable resources to load centres in a way that would preserve America’s landscapes from the effects of unsightly overhead lines, are a sound option.

1. They resolve difficult siting problems. Conventional overhead transmission lines require new corridors hundreds of feet wide (Figure 5). The time-consuming and potentially litigious process involved in siting these lines is a significant roadblock to developing new renewable power in the US. Superconductor electricity pipelines can carry thousands of megawatts of power in a 25-foot-wide corridor and can be placed in existing railroad and highway rights of way.

2. They improve aesthetics. Conventional high-voltage towers are more than 30 metres tall and can significantly impact the aesthetics of neighbourhoods, national parks and sensitive wildlife areas. Superconductor electricity pipelines are out of sight and out of mind. Unlike overhead power lines, they also are free from electromagnetic fields.

3. Increased security. Ice storms, hurricanes, tornadoes and terrorism are just a few of the threats to overhead power lines that are markedly less dangerous to underground lines.

5. They simplify cost allocation. Cost sharing for new AC transmission lines is a significant challenge owing to the difficulty in determining the benefit each affected electric utility receives. The power supplied to and delivered from superconductor electricity pipelines via DC-AC on- and off-ramps enables much simpler cost allocation.

6. They are cost competitive. When looking at the thousand-mile, multi-gigawatt transmission runs required to transport renewable energy from America’s heartlands to its cities, superconductor electricity pipelines are comparable in cost to 765 kV AC overhead transmission lines.

Just as in the USA, the European Commission (EC) has recently proposed a new energy policy to deal with a range of interrelated energy problems, including the mitigation of greenhouse gas emissions, energy efficiency, the accommodation and promotion of renewable generating sources, some of which are remote from load centres, and the growing electrification of member countries’ economies. Overall, the EC wants to de-emphasise foreign fossil fuel supplies while decreasing CO2 emissions. Part of the plan called for 20% of Europe’s power supply to come from renewable by 2020, a considerable increase on the current 8% share.

One of the ways to achieve the EC’s goals is to implement a vast ‘super grid’ using wind farms and solar power to help move Europe to a low carbon economy and secure its future energy supply by reducing dependency on imported gas and oil. The super grid would integrate grids across country borders using advanced technologies to facilitate the expected increase in renewable energy capacity and decentralised energy generation.

Examples of super grid projects currently being evaluated include a North Sea offshore grid for wind energy; a Mediterranean energy network capable of accessing solar farms and natural gas reserves in North Africa; and a Baltic Interconnection Plan to link the grids of countries bordering the North and Baltic Seas. Superconductor cable technology could help Europe meet its objectives.