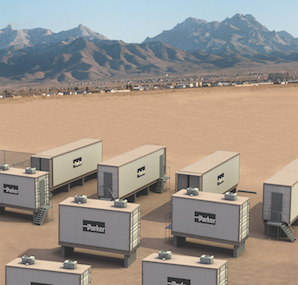 The Energy Grid Tie Division of Parker Hannifin Corporation said it shipped 113 MW of power conversion systems in 2015, bringing cumulative worldwide deployment to over 225 MW. The first MW- class system went on line in 2008. The majority of the systems are connected to lithium-ion batteries, but many have successfully linked flow batteries to the grid, says Parker Hannifin.

The 890GT-B, a 2 MW (2.2 MVA) rated outdoor power conversion system, accounted for the majority of the high-power installations, with indoor and modular variants covering lower power requirements or facilities where it was preferred to house the inverters in a building. The addition of outdoor-rated, climate controlled lithium- ion battery containers and full turn-key solutions further contributed to sales growth says Parker.

In North America, Parker installations were concentrated in the PJM market, but significant progress was also made in the MISO and CAISO territories. Elsewhere, projects included a 16 MW system in Korea, a 20 MW facility in Chile, and installations in Australia, Japan and Germany, together with the Advancion units in Northern Ireland and The Netherlands.