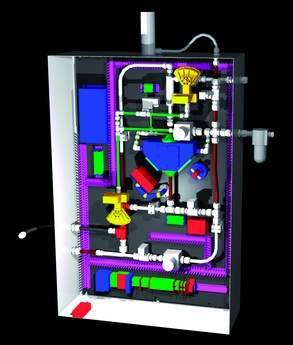 Coal particle size analysis is a crucial element in the optimisation of coal-fired combustion for power generation, with coal particle size impacting many aspects of the combustion process including: loss of ignition (LOI); coal flow characteristics; pipe erosion; and NOx and CO2 emissions. Knowledge of coal particle size also enables plants to improve maintenance strategies for pulveriser and classifier equipment.

Traditional manual sampling methods used to capture coal particle size data have tended to be taxing and costly, and the not insignificant time delay between collection and analysis has reduced reliability and restricted the applicability of results, limiting the benefits to be derived from the measurement process. Now, however, on-line measurement of coal particle size is enabling existing coal-fired plants to make major improvements to operational efficiency.

Following an extensive four year R&D programme, the Greenbank Group has unveiled an on-line system called the Mill Particle Size Analyser (Mill-PSA). The Mill-PSA is the first of its kind in the world and, following the product launch in May, has already attracted a lot of industry attention.

The size of particles that can be measured ranges from 0.5 micron to 500 microns for the standard device. The device works by illuminating the particles using a laser and generating the light sheet via specialist optics. An image of the illuminated flow is then captured using a high speed charge-coupled-device (CCD) camera. The camera “freezes” the image of the illuminated flow and various image processing algorithms are then applied to it.

A distinguishing feature of the Mill-PSA system is the application of algorithms for identifying in and out of field particles and determining the true particle size from the image. As the light sheet illuminates the particles it also alters their apparent size and being able to determine the true particle size from the image and known camera parameters is what makes this device so effective. The PSA can perform several different measurement operations.

Primarily the PSA counts and sizes the particles in the sample and this size distribution can be arranged in a number of ways for presentation to the user. As a default it is arranged into bins of various sizes, indicating the approximate size distribution. Alternatively, the system can present the information as a Rossin-Rammler distribution, which is more familiar to engineers operating milling groups and classification processes. The programme also calculates and trends the average particle size, the maximum detected and the minimum detected.

For any given application, the outputs can be altered to suit specific customer requirements. For instance if a station has an existing PLC protocol for data collection the appropriate module can be added to give the appropriate protocol out. If the station is only interested in size fraction above a certain level, the system can be programmed so that only that information is transmitted.

The device operates on the basis of iso-kinetic extraction so the sample collection is comparable to other samples gathered according to this international standard. Usually the sampling point is positioned in an area of good particle diffusion, well away from regions of significant roping or clustering. If such a position cannot be found then computational modelling can be used to select a location that will provide a sufficiently representative sample.

The Mill-PSA system cabinet can be set up to perform continuous sampling at a single point or take timed samples at a number of points and rotate between these ports. The latter is done by controlling motor operated valves (MOV) connected to a small bore (1/2in) stainless steel pipe network. In this way a single system can take up to eight single point samples. Once a sample is measured it is returned to the pipe network, either rejoining the particulate flow or going to a reject line.

When installed with several probes it can deliver the information from a probe every five minutes, while in continuous mode with a single probe it will deliver an updated reading every minute. The results issued are averaged from several images taken of a particular sample and this is then further averaged over time, thus improving the accuracy of the information supplied.

The Mill-PSA system is housed in an air-cooled IP65 cabinet designed to withstand industrial environments. As the system is laser based, the cabinet is fully interlocked which means there is no danger of laser exposure. The scale of the laser diode is such that there is no chance of any ignition from the laser light. The system itself is controlled by an internal programmable automated controller (PAC) and communicates with the plant by either Ethernet communication or by 4-20mA signals. The cabinet has a touch screen that allows the viewing of results and enables the machine to be reset or turned off.

Through an Ethernet connection, engineers can get the same interface directly on their computer allowing them to remotely view the PSA’s operation. Alternatively OPC TPC/IP tags can be set up for engineers to feed into any distributed system that uses OPC.

The PSA was originally developed for ground coal, a typical set up being a system sampling from the ground product line between the mill and the burners. The primary function in this application would be to monitor the grind of the coal leaving the mill. The probes would be placed in a position such that a reasonable air/fuel mix would be present to give a representative sample. The reject line can either return the coal to the pipe, the bottom of the boiler, or a reject chute on the mill.

With the rise in the use of dynamic classifiers, being able to compare the improvement in the grind compared with the energy consumption of the dynamic classifier can be considered of high importance, especially as some studies suggest there are diminishing returns with increasing classifier rotation speeds.

If the PSA is connected permanently it can trend the grind of a particular mill, detailing the changes in grind performance over time. This information can then be used to identify maintenance points and possible signs of catastrophic failure.

In a coal system there is a constant risk of explosion and fire. In order to counter this problem the PSA comes with an incident sensor that detects the leading edge of a large pressure gradient. Upon detecting this, the programme initiates a shut down and activates a sacrificial ball valve. This ball valve is designed well beyond the standard explosive pressures, but is easily removed if damaged. The PSA cabinet then reports the incident via the Ethernet communication and waits to be told to restart. This feature can be deactivated, but by default is activated to protect the device.

Whilst developed primarily for coal analysis, the technology behind Greenbank’s PSA product has proven suitable for operation within any lean phase powder system and following the successful launch of the Mill-PSA, Greenbank is now planning the introduction of a Stack-PSA for operation in sizing fly ash, both in ash ducting and emissions from the stack.

The new PSA systems join Greenbank’s family of boiler optimisation products, which have resulted from extensive research and development programmes involving UK engineering universities such as Nottingham, Leicester and Cambridge. The family includes G-CAM, already used in a number of power plants around the world, which employs microwave techniques for on-line carbon-in-ash measurement, and VARB (Variable Area Rope Breaker) technology, also in use at a number of plants, which helps improve coal/air distribution to the boiler, increasing efficiency and lowering NOx.