On a high at Glendoe

Due to its remote location, engineers working on Scotland’s newest hydroelectric reservoir have been required to bring in specialist equipment to construct deep boreholes and conduct in-situ tests 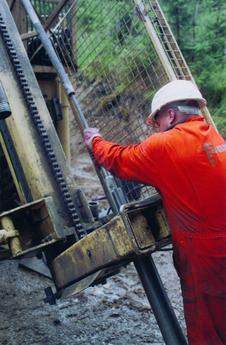 Glendoe lies at the western end of the Monadhliath Mountains, to the east of Fort Augustus in Invernessshire. The 100MW power station will be one of the largest of 54 stations operated by SSE. It will be built mainly underground, close to the southeast corner of Loch Ness and will produce around 150M units of green electricity in a year of average rainfall – enough for almost 40,000 homes.

The new scheme will be situated on a remote plateau at the head of Glen Tarff. The water will be collected in a new reservoir above Loch Ness from a catchment area of around 75km2, directly or via 17km of underground aqueducts. With a head of over 600m, the biggest of any hydro station in the UK, Glendoe is expected to become one of the most efficient hydro schemes in the country.

The reservoir will be impounded by a dam approximately 1000m long and up to 35m high, shaped to suit the topography and geology of the area. The dam and aqueduct will be linked to the underground generation facility by a 4.5m diameter tunnel.
As part of the pre-planning process, the scheme was subjected to a detailed environmental assessment; the scope developed in consultation with Scottish Natural Heritage and with the Scottish Environment Protection Agency.

Construction is expected to cost around UK£85M (US$157.6M) and is likely to take around three years, followed by one year to fully commission the power station. On this basis, the new scheme is likely to be generating electricity from 2008/9. Up to 400 jobs are expected to be created during the construction phase.

The fieldwork undertaken this Summer (2004) entailed an extensive 10-week ground investigation by Fugro Engineering Services Ltd (FES). As part of this investigation, FES needed to transport drilling rigs with sufficient capacity to drill boreholes to target depths of 50m to the top of the plateau, to determine the geotechnical and geological conditions for the dam foundation design. Moreover, to investigate the tunnel, vertical and inclined boreholes drilled to 350m deep were required – several times the depth of a typical civil engineering project. To do so, rigs would need to be set up in woodland and open moorland with access along rough, hillside tracks.

FES needed to deploy three different types of rig. Drawing on the resources of the Fugro Group, FES used Unimog-mounted Knebel rotary rigs from its Northern Offices in Consett, County Durham, two Longyear 38 rotary rigs shipped over from Fugro Hong Kong, plus a Fraste mini-rig. A team of geophysicists and a number of specialist sub-contractors successfully completed the investigation within SSE’s timescale.

Tunnel route
Drilling operations began in Glendoe on the route of the power tunnel in mid-May 2004. For the forested slopes, criss-crossed by rough tracks, FES chose Unimog trucks fitted with Knebel HY77 rigs. On top of the plateau, which was remote and inhospitable, they would need to devise an alternative solution.

The ‘all-terrain’ Mercedes Benz Unimog truck is capable not only of working in rough conditions but also has on-road speeds of 56mph and is therefore well suited to work on sites several miles apart. The four tyres of the vehicle can be inflated/deflated from within the cab to suit the ground conditions. This not only provides optimum traction, but can minimise land damage.

The Knebel electro-hydraulic rig fitted to the Unimog can drill boreholes and wells of 100mm to 250mm diameter and hundreds of metres deep. Its rotational speed range allows a variety of drilling techniques including conventional open hole tricone drilling, down the hole hammer, duplex and overburden systems, and high quality coring using large diameter Geobore S triple-tube wireline barrels or conventional core barrels.
Also, with the Unimog, there is usually no need for support vehicles such as low loaders and towing tractors, which are often required for stand-alone rigs. On-board mud, water and foam pumps to suit the drilling method and ground conditions are an added advantage.

The Knebel was used to drill vertical and inclined boreholes to depths of up to 350m using coring and open hole techniques. The investigation involved several specialist techniques. Geophysical borehole logging, with optical and acoustic televiewers, natural gamma and calliper logging techniques, was carried out in each borehole. Hydraulic fracturing was performed within the tunnel zone to determine the in-situ stress at certain depths in selected boreholes.

These specialist operations were performed by Robertsons Geologging Ltd and by Solexperts AG. The hydrofracture tests were conducted at depths of between 220 and 280m, in accordance with the isrm Commission on Standardisation of Laboratory and Field Tests, Suggested Method for Rock Stress Determination. Data capture was via laptop computer and, following processing of the results, the stress magnitude was shown to generally increase in depth and be consistent across the site.

Work on the plateau
Work on the remote plateau coincided with Scotland’s wettest summer for 30 years. The only practical access for plant, equipment and personnel to the site was by helicopter. FES could use its standard Fraste Terra-In mini-rig, easily transportable by light helicopter to complete around 50 shallow exploratory holes. However, deeper boreholes, around 50m, needed larger, more powerful rigs.

The Fraste Terra-In is a small, lightweight drilling rig for shallow soil investigations. It is often used in restricted areas where access is difficult and is designed for rotary, rotary percussive and percussive drilling and sampling techniques. Track-mounted, it has good manoeuvrability over uneven ground, an overall width of only 740mm, operating height of 2500mm and – most important for the helicopter lifts – a weight of only 850kg.

Nine deeper boreholes, from 30 to 50m, in varying geology along the proposed dam and aqueduct alignment were also required. Here, FES turned to another subsidiary of the Fugro Group based in Hong Kong, where helicopter deployment to construction sites is more common. They were able to supply two Longyear 38 rigs, which can be broken down into parts to be re-assembled once on site.

The Boart Longyear 38 diamond core drill has high power-to-weight ratio and can drill to depths of 750m. It has a combination vertical and angle-hole mast, which can be transported separately. Together with its ancillary equipment, generator, compressors, rods and a shelter for the crew the whole ‘package’ could be transported onto the plateau in about 10 lifts, each less than the one tonne lifting capacity of the helicopter.

While on the plateau, a team of Fugro geophysicists completed a resistivity and refraction survey to further map the depth to rockhead. Laboratory rock testing was successfully completed at FES’s Soil Laboratories in Consett by SINTEFF (University of Trondheim) and Leeds University.

It is hoped that construction work will start during the Spring of 2005 and be completed by 2008/9.