After more than a decade of planning, construction of the world’s first floating liquefied natural gas facility is finally underway. Neil Gilmour and Harry van der Velde of Shell tell Rod James about the technical challenges of moving offshore, the need to model for any eventuality, and the wider impact the FLNG vessel could have on global gas production. 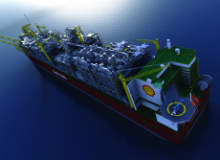 You are a petroleum engineer, clad in orange overalls and a hard hat, wandering through a labyrinthine network of pipes, steel girders and storage tanks. Suddenly, the ground beneath you disappears. You are suspended horizontally in mid-air, looking down on the vast ocean.

Thankfully, this isn’t reality or even a strange dream. The action is being played out on a large high-definition screen at Shell’s technology centre in Rijswijk, near The Hague in the Netherlands. The engineer is an avatar, his surroundings a detailed 3D model of a floating liquefied natural gas (FLNG) facility. And the sudden burst of flight? That’s what happens when you fall overboard.

After 15 years of studies, simulations and models like this one, Shell’s ground-breaking offshore project finally received the green light in terms of investment in May 2011.

The largest ever offshore facility

At 488m long and 74m wide, the plant will be the largest offshore facility ever built. The 260,000t of steel that will go into its construction is five times the amount used to build the Sydney Harbour Bridge. According to Neil Gilmour, Shell’s general manager of FLNG, when finished, it should allow the company to produce, liquefy, store and transfer LNG at sea, bringing to market trillions of cubic feet of stranded gas.

"Shell FLNG can help develop resources earlier and faster, and extends our exploration reach," he says. "It can be a cheaper and development risk-reduced way to monetise single gas fields, a cluster of smaller fields or a large field with multiple facilities, as the FLNG facility can be redeployed at the end of field life to another gas field. We are now into the execute phase of development. In September we cut first steel for the subsurface wellheads."

Initially, the gigantic vessel will be located at the Prelude gas field, off the coast of Western Australia, but it can be towed to any location that holds sizeable stranded gas reserves. Gas molecules will come onboard by way of a flexible riser, which helps link a set of flow lines to a massive turret at the front of the vessel. Initially consisting of a mixture of gas condensate, liquid petroleum gas (LPG), CO2 and water, what will become the LNG will have to be separated out in a series of inlet separation columns before being transformed into liquid.

"Some people say that you are just bringing the onshore offshore. It’s much more complicated than that."

"To make it liquid, we have to reduce the temperature in steps," elaborates Harry van der Velde, manager of FLNG development, during a talk at the Rijswijk facility. "The gas will typically arrive at around 25°C and will then go through three stages of pre-cooling. The temperature is taken from 25 to 0°C, from 0 to -25°C, and then from -25 to -50°C. That’s done through the dual mixed refrigerant process, which is basically a large fridge at the heart of the plant.

"Then the gas is taken down to the temperature where it becomes a liquid in the main cryogenic heat exchanger, from -50 to -160°C. The LNG is then ready to store in the hull."

The infrastructure required to carry out this process would take up four times as much space in an onshore facility. Despite this, the FLNG isn’t a scaled-down version of an LNG terminal. Most of the space savings come from pushing infrastructure closer together and some components are even larger than their onshore equivalents to allow for the effects of motion.

"Some people say the FLNG is merely a glorified FPSO or that you are just bringing the onshore offshore," says van der Velde. "It’s much more complicated than that. For example, sometimes the tanks won’t be fully filled and the LNG will slosh. You need to be able to predict the extent of sloshing and the force it will exert on the tank. The other key thing is how you offload to a carrier. For Prelude, it will moor alongside and connect by means of loading arms. These are similar in principle to what we use for onshore plants but adapted for the offshore environment. A lot of simulations were done to see how the carrier would moor."

"Our research shows that our FLNG facility is more stable than a floating production, storage and offloading facility due to its sheer size."

Sloshing is a complicated phenomenon that can cause significant damage to the walls of a storage tank. In response, Shell has developed a special membrane LNG tank that can withstand sloshing forces while only partly full. To aid offloading there are three thrusters, which can subtly change the position of the FLNG in relation to an LNG carrier. This is especially useful during times of high wind or rough seas. Although the weather is fairly benign in that part of the world, there were still plenty of aspects to consider.

"Our mooring system is able to withstand severe weather and can stay on station even during a category five hurricane," Gilmour says. "We also had to marinise process equipment such as absorption columns and the main cryogenic heat exchangers so that they can operate efficiently under marine conditions with roll and pitch in the structure. Our design is centred on minimising risk. Our research and testing shows that our FLNG facility is more stable than a floating production, storage and offloading (FPSO) facility due to its sheer size, and its safety is on a par with other modern offshore facilities."

The FLNG is designed so that the most potentially hazardous facilities are as far as possible from the accommodation block. The turret where the gas is brought on is at the front of the vessel, with the more stable utilities and power generation facilities at the back. There is a modular design plan with a safety gap between each unit, so any hazard can be quickly contained. As a result of these measures, the project passed its environmental impact assessment with relative ease back in November 2010.

"The government gave Shell environmental approval with 13 conditions, a relatively low number," Gilmour says. "The key ones were a greenhouse gas abatement strategy, to be approved by the minister; an oil spill contingency plan for a potential uncontained spill that would last 11 weeks; and an operational and scientific monitoring plan in the event of a spill, which determines the impact on ecosystems. FLNG technology provides a low-footprint alternative for gas developments where undersea pipelines and ports would exact too high a toll on the marine or coastal environment."

"FLNG technology provides a low-footprint alternative where undersea pipelines would exact too high a toll on the marine environment."

The FLNG is touted to stay offshore Australia for the next 25 years, although areas such as the East African coast could also benefit greatly. Consequently, Shell has formed a team to monitor the building process, take on board best practice and devise a template with which other vessels can be built more quickly and cheaply.

"The relatively small size of the Prelude gas field and its remote location make it an ideal candidate for development via Shell’s FLNG," says Gilmour. "But we see opportunities across the globe. Our mature design basis – standardised where possible, and safe and robust – enables continuous, stable LNG production and allows for the design, construction and installation of multiple FLNG facilities."

Gas plays an increasingly significant role in the global energy mix. In fact, this year Shell will produce more gas than oil for the first time in its history. If all the models and simulations prove correct, FLNG will have a significant impact on the ease, cost and environmental impact of offshore gas exploration.