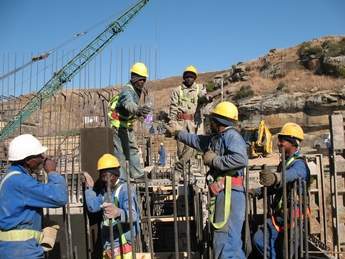 NuPlanet is a South Africa based small hydro developer, owner and operator. In 2009 the company commissioned the first unit of the 7MW Bethlehem Hydro project, the first new green field hydropower project in South Africa since the 1980s. In 2010 the second unit of Bethlehem Hydro was commissioned, and NuPlanet secured the exclusive development rights on a further 16MW of green field hydro.

NuPlanet is unique in the southern African market in that it is only focussed on hydropower and had not joined in the rush to large scale wind and solar projects. Anton-Louis Olivier, the founder and Managing Director of NuPlanet explains this strategy: “We found that although there is a lot of commonality in developing independent, renewable power projects, hydropower development requires a lot of specialised skills, knowledge of the technology and operational aspects, which are all unique to hydro. This expertise gives us a competitive edge and enables us to manage development, construction and operational risk in a very efficient manner,” he says. “Rather than compete with the experienced international wind and solar developers, we are focused on small hydro where we have a definite advantage.”

NuPlanet was established in 2006 in South Africa with investment from two South African private equity funds. According to Olivier this investment made it possible to finance and implement a business strategy that did not rely on grants or donor financing: “Traditionally small hydro development was donor funded and once off. We have not come across any other developers in the market that were able to move beyond a first project. Because NuPlanet has its own resources, it can develop projects at its own risk and under its own control and move away from the typical impoverished developer model.”

The business model on which NuPlanet functions is based on active ownership and responsible, sustainable development of renewable energy. All projects are developed in close co-operation with all stakeholders: landowners, financial, governmental and particularly local communities.

Recently, NuPlanet was awarded an exclusive generation licence for a 5MW plant at Mtirikwi Dam in Zimbabwe. This is NuPlanet’s first secured project outside South Africa. Olivier adds: “We are very pleased to have been awarded this project and to move internationally. Although South Africa has got some good small hydro potential and a strong financial sector, the potential for projects in South Africa is very limited, probably to around 300MW, excluding new dam construction. Our long term growth will therefore come from outside South Africa.”

The hydropower potential in Southern Africa has traditionally consisted of two market segments:

• Large national or international projects such as the one or two large hydro projects found in South Africa, Zimbabwe, Malawi, Namibia and Mozambique and the projects along the Zambezi.

These two markets experienced growth in the 1960s to 1970s and then stagnated, with no new large hydro being constructed until the recent start of the 250MW Bujugali project in Uganda and a couple of isolated small hydro projects. Recently however the hydropower market has changed. This is due to a number of factors:

• Increased international interest in the Southern African market as a future growth market and due to climate change issues.

Sub Sahara Africa’s small hydro potential still remains largely untapped. Hundreds of sites have been identified over the years but not developed. Despite the growing demand for power in the region, most small hydro power projects still remain in the concept stage due to a number of factors as outlined below. Small hydro will, almost by definition, be developed by the private sector. National utilities in the region do not have the resources or appetite for small generation projects and are, rightly so, focussed on larger projects. The private sector will need to overcome the following:

• High cost of grid interconnection as sites are far from the existing grid.

• Lack of debt financing. This barrier is rapidly diminishing, with development and commercial financial institutions increasing their market penetration into the region.

NuPlanet has identified some 300MW of small hydro potential in the Southern African region, with most projects in the range of 5-20MW. Table 1 show details of existing projects.

Bethlehem Hydro was created to own and operate the 3MW Sol Plaatje and the 4MW Merino plants located near Bethlehem, South Africa.

Both the Merino and Sol Plaatje power stations can operate semi-autonomously. During normal operations the plants are self-governed and do not require operator inputs. There is therefore no requirement for full-time operational staff. Day to day operation of the plants in Bethlehem Hydro is contracted out to Revolution Energy, which is a division of NuPlanet.

Water is returned to the Liebenbergsvlei river downstream of the dam. One 2.1m diameter double regulated Kaplan turbine, attached to a generator, is installed in the power station.

Merino is a run-of-river plant and consists of a diversion weir with a semi-circular spillway in the river, a 700m long canal to transfer the water to the power station, a small forebay and the power station situated in a sandstone bank from where the water is returned to the As river. The generating head is approximately 14m and the generation output at the maximum flow will be about 4MW. A single Kaplan turbine and generator are installed in the power station.

NuPlanet has also acquired the rights to develop another 17.5MW of hydropower in Southern Africa. Altogether these new power stations will have an estimated capital cost of R350M (US$46M). The new projects are:

• Botterkloof Hydro: 4.1MW run-of-river located on the As river.

• Boston Hydro: 4.1MW run-of-river located at the As river.

• Mutirikwi Zimbabwe: 5MW located at the wall of the Mtirikwi dam.