Japan is a major player in the world of energy but recent years, during which the Fukushima disaster has threatened the role of the nuclear industry as a major instrument of the country’s climate change policy, have been challenging. The subsequent reform of its energy sector is the subject of IEA’s assessment of Japan’s energy industry published in the autumn of 2016. These reforms will have immediate ramifications that reach to 2020 and beyond. 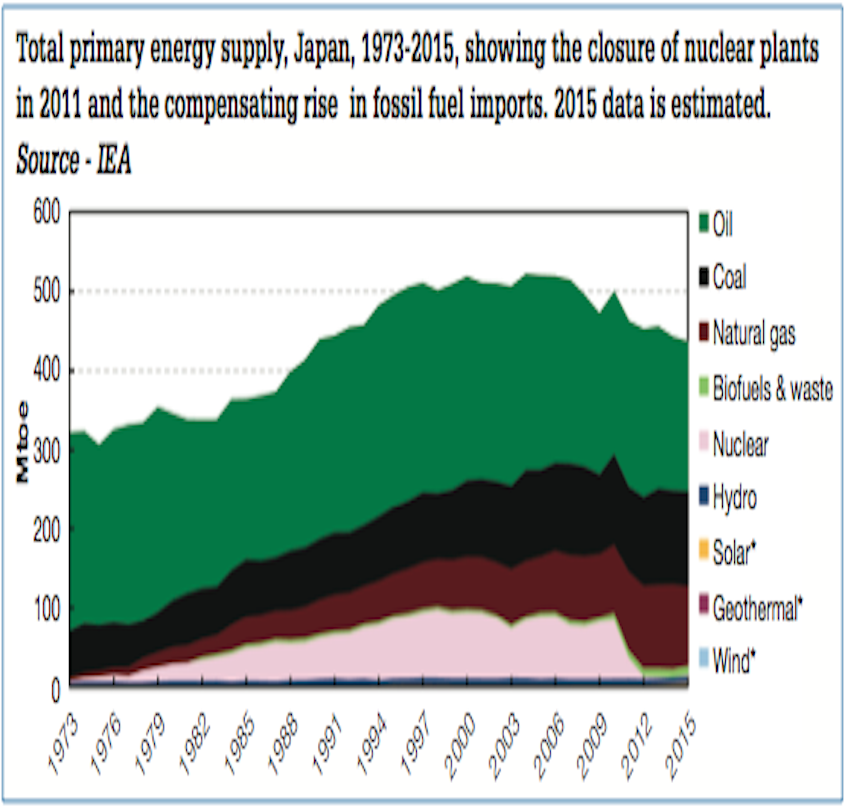 The restarting of Japan’s nuclear power reactors is ‘critical’ to the success of the country’s energy policy, according to the International Energy Agency. However, it says, nuclear power should only be restored on condition that the highest safety standards can be met and public trust regained.

Japan’s energy policy has been dominated in recent years by the effort to overcome the impact of the March 2011 earthquake and tsunami, and the subsequent disaster at Fukushima Daiichi NPP. Japan’s subsequent shut down of its nuclear entire fleet left a gap of some 30% in electricity capacity. This gap has been filled at great expense with imported fossil fuels. By the end of 2013, import dependence had risen to 94% from 80% in 2010. Meanwhile, annual emissions of carbon dioxide from power generation had increased by 110 million tonnes. Electricity prices increased by 16% for households and 25% for industry. By the end of 2015, just two reactors had been restarted and accounted for 0.9% of Japan’s electricity generation that year, compared with nuclear’s share of 25.3% in 2010.

In April 2014, the government adopted the fourth Strategic Energy Plan and, based on that plan, the Ministry of Economy, Trade and Industry prepared the 2015 Long-Term Energy Supply and Demand Outlook to 2030, which was adopted in July 2015. This outlook assumes Japan’s nuclear generating capacity will be partially restored, reaching 20%-22% of electricity supply by 2030. The country also announced plans in late 2015 to reduce CO2 emissions by 26% from 2013 to 2030.

In its report (Energy Policies of IEA Countries: Japan 2016 Review) the IEA said: “The most cost-effective way to begin implementing the SEP is to restart nuclear power generation at plants that the Nuclear Regulation Authority approves as safe.” But the IEA report warned that if nuclear power generation falls short of the 20%-22% target it would be very difficult to fill the gap with renewable energy alone.

To date, five Japanese reactors have been given final approval to restart, although two of these have remained offline owing to a legal challenge. Another 20 reactors are moving through the restart process, which has been prioritised to bring on the most-needed reactors first, in the localities and prefectures more supportive of restart.

In July 2016 the Institute of Energy Economics, Japan, predicted that seven Japanese reactors would likely to be in operation by March 2017 and 12 more one year later, although judicial rulings and local consents will influence the rate of restart. These 19 units would be generating some 119.8 TWh of electricity annually, compared with total nuclear output of 288.2 TWh in FY2010, the year before the Fukushima disaster.

In June 2015 a plan setting a share of 20% to 22% for nuclear power in Japan’s energy mix by 2030 was approved by an Advisory Committee to the Ministry of Economy, Trade and Industry. While scaling back fossil fuel use, the plan also called for an expansion of renewable energy sources to meet an increase in total energy demand in the country from 940 TWh in 2013 to 980.8 TWh in 2030.

In 2013, following the nuclear shutdown, LNG accounted for 43.2% of Japan’s power generation, with 30.3% coming from coal and 14.9% from oil. Nuclear accounted for only 1.7%, with the rest coming from renewable sources, according to Japan Atomic Industrial Forum.

Japan is the world’s fifth-largest electricity user. Electricity accounted for 28% of total final consumption of energy in 2014, a high share by international comparison.

Government policy since the oil crises of the 1970s has been to diversify energy sources for electricity generation so as to increase security of supply in a country heavily dependent on fuel imports. Electricity supply has been based on a system of regional monopolies relatively isolated from each other. Competition in the wholesale and especially retail markets has been limited, although independent power producers have been granted market entry since 1995 and power producers and suppliers have been allowed to supply electricity to large customers since 2000.

All this is changing now. The 2011 earthquake and subsequent events at Fukushima highlighted several weaknesses in the electricity system and prompted the government to begin an overdue reform of the electricity market. The reform has three objectives: to secure a stable supply of electricity, to suppress electricity rates to the maximum extent possible, and to expand consumer choice and business opportunities.

The reform is being implemented in three stages. First, in April 2015, the start up of the Organisation for Cross-regional Co-ordination of Transmission Operators. Its job is to assess generation adequacy and ensure that adequate transmission capacity is available.

Second, full liberalisation of the retail market with effect from April 2016. All consumers may now choose their supplier. Before liberalisation, in September 2015, the Electricity Market Surveillance Commission (EMSC) was established as the regulatory authority for electricity under METI. In 2016, its remit was expanded to cover also the gas and heat power markets in order to prepare for the liberalisation of the gas and heat market, and its name was changed to the Electricity and Gas Market Surveillance Commission (EGC).

Third, in April 2020, the transmission and distribution segment of the electric power companies will be legally unbundled from the generation and retail segments.

In the gas market, Japan’s gas industry remains dominated by a few vertically integrated companies that are based in large urban regions. They control the import and regasification of LNG and the supply, marketing and transport of gas to larger individual customers and smaller gas distributors and retailers. They are regionally based with limited pipeline interconnectivity which makes effective competition in the sector difficult.

The government has also embarked on a gas market reform, with the same three objectives: securing supply, decreasing prices as much as possible, and expanding consumer choice and business opportunities. Reform consists of introducing full retail competition in 2017, improving access to pipelines and improving third-party access conditions and tariffs related to LNG terminals. Recently, METI has proposed a new strategy for developing a more flexible international LNG market, including developing an LNG trading hub in Japan.

A substantially increased portfolio of renewables will be required to achieve Japan’s emissions reduction targets to 2030.

Japan introduced a feed-in tariff system in July 2012 to increase generation as quickly as possible, but with mixed results. While renewable energy experienced a rapid boost, growth was concentrated in solar PV, the total capacity of which has exceeded 32 GW. This has produced an urgent need to increase the flexibility of the overall power system, to significantly reduce generating costs and to increase the capacity of other renewables.

As in several other IEA countries, Japan’s initial subsidy levels for solar PV proved too generous. The overall subsidy cost for renewables is estimated at JPY 2.3 trillion in fiscal year 2016 and METI expects this to rise to between JPY 3.7 and 4.0 trillion by 2030, as renewable electricity generation is expected to increase by around 100 TWh over the 2014 level, about 23% of the country’s electricity.

Grid integration of renewable electricity is difficult in Japan, owing to the country’s geography and the historical evolution of the electricity sector. To reap the full benefits from electricity market reform, it will be essential to create an independent body to advise neutrally on the technical issues of grid integration.