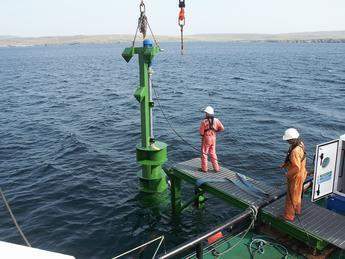 TECHNICAL director Göran Lagström formed the company Sea Power some 20 years ago in Sweden. Its original activity was the extraction of valuable ions like uranium oxide out of seawater, but Sea Power was later restructured into an entity directed towards generating renewable energy from wave power.

The first model tests were performed at the Chalmers Institute of Technology in Gothenburg, Sweden and based on the results collected, a floating power vessel (FWPV) was developed. A160t pilot vessel has been tested under realistic conditions off the west coast of Sweden, including up to 12m waves. After further development work and testing at the HR Wallingford test facilities in the UK, the FWPV vessel is planned for manufacture and commissioning during 2004.

Sea Power has since then diversified into the field of tidal and stream power.

The patented EXIM tidal and stream turbine was originally designed by Lagström, under the umbrella of EXIM Strömturbiner AB, (now a 100% subsidiary to Sea Power) with the objective of developing a method for converting the kinetic energy of ocean currents into rotary energy.

A number of turbine models were originally tested, including a field test in Shetland Island waters, confirming preliminary theoretical calculations.

A full-scale test was performed at the Ship Design and Research Centre in Gdansk, Poland in August 2002, in cooperation with a partner, Navimor Sp. z o.o., as a joint venture called Seapower Polska Sp. z o.o.

Depending on site specifics (depth, current speed, available free area) the size and number of turbines can be increased with corresponding increases in production capacity.

Last year, a joint venture was established between Sea Power and Delta Marine – a Lerwick, Shetland-based firm – and in September 2003, tests began at ten sites at Shetland, with the aim of checking the EXIM prototype design and to discover the best places to build a full-scale tidal power station.

Sea Power’s shareholders met all the development costs up to the test. Valuable finance and operative support were also provided by the Shetland Islands Council and Shetland Enterprise, which contributed over US$22,000 each to the scheme.

For the Shetland tests, Delta Marine provided its service vessel Voe Venture, while BEVI Teknik & Service of Sweden supplied the generator and gearbox, and the turbine with supporting frames were manufactured by Ocean Kinetics of Lerwick.

The EXIM turbine was attached to the anchored vessel and made to operate under realistic conditions. The electrical energy produced was measured and controlled onboard the Voe Venture and delivered to its grid onboard.

At speeds of around 2.5m/sec, the induction generator delivered 3kW to the vessel’s grid, although it also had to cover losses due to the frame twisting by 2–3 degrees. The 2.5m shaft on the turbine probably also twisted.

There would however be no such problems onboard a boat or a catamaran, due to the shaft between the bottom of the boat or the catamaran deck and the water being very short.

The next tests were done in very slow tidal current speeds of around 1.5m/sec. The energy generated by the turbine was not enough to cover the losses in the gearbox and generator, so no power was delivered to Voe Venture’s grid at all.

The electrical effect rises with v3. If slow current speeds are typical in an area, it will be necessary to use a catamaran-type vessel with the intake (position 1; speed = v1) broader than at the turbine (position 2; speed = v2).

One of the major advantages of tidal energy is that it is predictable, unlike wind and solar, so the annual production for any unit can be calculated rather accurately.

No comprehensive worldwide study has been made, but the UK Department of Trade and Industry energy technology support unit estimated that practically (as of 1999) the energy that could be obtained off the British coast alone was:

To put these figures into perspective, the UK’s electricity consumption for the year 1999 was approximately 330TWh.

With cost-effective design and construction, using well-proven generators and gearboxes as well as good shipbuilding and mooring techniques, the production cost per kWh will be very competitive. Calculations indicate that the cost factor could be half the current costs of production of wind energy.

The current results have been verified and are now available at the Shetland Island Council and Shetland Enterprise. When the data collected from the Shetland tests are finally evaluated, the best sites will be selected and planning permission sought from the appropriate authorities. The first full-scale station is planned to be working before summer 2004.

The EXIM turbine, including supporting frames, is now available for further tests at locations with good tidal streams around the Highland and Island area and elsewhere.