No room for error: the design and logistics of the P-55 platform

The construction of Petrobras’s semi-submersible platform P-55 was a feat of engineering involving what was probably the world’s largest-ever lifting operation. Petrobras’s Edmilson Medeiros tells Mark Brierley more about the challenges posed in the design, build and finally transportation of a platform of this scale. 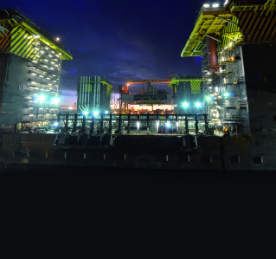 The P-55 platform is Petrobras’s largest semi-submersible platform project. Capable of producing up to 180,000 barrels of oil and six million cubic metres of natural gas a day, it will be towed to the Roncador oilfield in the Campos Basin offshore Brazil to start work in September 2013.

The design and construction of such a behemoth tested the limits of today’s technology. The platform deck alone weighs 17,000t; in order to mate it with the rest of the super structure, it had to be hoisted 40m into the air, the heaviest lift ever achieved. P-55 (IEP55) contract implementation manager Edmilson Medeiros tells Mark Brierley how this feat of engineering was achieved.

Mark Brierley: Is the P-55 an enlargement/evolution of previous designs or a new design specific to this platform?

Edmilson Medeiros: This is a pioneering semi-submersible platform project based on a prototype from the Semi-BR project, designed by Petrobras’s Cenpes research centre. The P-55 is the third-largest semi-submersible platform in the world, with displacement 30% higher than the P-51, P-52 and P-56 series. It weighs around 105,000t, compared with 81,000t for these other platforms.

The P-55 hull design was developed by the Cenpes research centre and is the outcome of several years of engineering research and development in partnership with Brazilian universities, using technology that is 100% Brazilian. It is yet another milestone for Brazil’s oil industry. For the topside, we used the basic design developed by the Dutch firm Gusto.

What challenges were there in terms of designing and constructing a platform of this scale? Were newbuild techniques devised or new construction facilities required?

A system was specially developed for the deck mating operation. It was designed to hoist the deckbox, weighing around 17,000t, and lower it onto the P-55 hull. The system consists of 12 towers coupled to 24 hydraulic jacks, each with a capacity of 900t, which were used to raise the deckbox 47.2m above the bottom of the dock.

The structure is lifted by 24 sets of 54 steel cables coupled to 24 anchor points on the deckbox. Each 18mm steel cable is 60m long, making a total of over 77km of cable. This was the first time a deckbox had ever been lifted onto a hull in Brazil, and it is probably the largest lifting operation ever carried out in the world, taking account of the weight and height of the structure hoisted. This procedure required continuous risk identification and analysis, as well as tight dimensional tolerance to perfectly mate the two parts of the platform (deckbox and hull).

The big difference with this type of operation is that you have two enormous structures that have to mate perfectly under strictly controlled conditions – with no room for error.

What efforts has Cenpes made to standardise the design of the semi-submersible platforms and FPSOs? What advantages does this bring?

The main advantages of standardising projects are the gains made in time and costs at the platform detailing, construction and deployment stages. For example, for new FPSO hulls, a 20% reduction is expected in the amount of work required to build the sixth hull compared with the first one as a result of the gains made in learning.

"Working at full capacity, the P-55 will be capable of producing up to 180,000 barrels of oil and six million cubic metres of natural gas a day."

In recent years, Cenpes has maximised standardisation in its basic engineering activities during E&P projects. An example of this practice was the development of the basic design for the process plants for Replicant FPSOs P-66 to P-73, intended for use in the Santos Basin pre-salt area.

In addition to meeting the needs of the different areas where they operate, the standardised plants will enable significant gains in construction and assembly.

How was the lifting of the 17,000t platform achieved during the mating procedure?

The deck-mating procedure began on 25 June 2012, when the deckbox was raised for the first time to a height of 20cm for testing and final weighing. The lifting process continued on 27 June and, on the next day, the deckbox reached 15.4m above the bottom of the dock. Meanwhile, the keel blocks were rearranged and fenders were erected inside the dock, procedures that were completed on 30 June.

The dock-flooding process was started the same day, when the water collection pipeline valves were opened. A total of 642 million litres of water were needed to take the water level inside the dock to 13.8m. Once the flooding had been completed, the caisson was removed to manoeuvre the hull of the P-55 into the dock and then repositioned to seal it. The next day, the dock was drained to lower the water level to 7.2m.

The deckbox was lifted to a maximum height of 47.6m on 5-6 July and the hull aligned underneath it. Finally, on 7 July, the hull was positioned under the deckbox, which was then lowered onto it, completing the deck-mating operation. The next step was to drain the dock until the hull and deckbox assembly were lowered onto the concrete keel blocks.

The modules were then installed and the system integrated over the subsequent months. After this stage was completed, the P-55 was transported to the Roncador field in the Campos Basin off the coast of Rio de Janeiro, and is expected to begin operations in September 2013. Working at full capacity, the P-55 will be capable of producing up to 180,000 barrels of oil and six million cubic metres of natural gas a day.

What logistical challenges does moving a structure of this size present in terms of lifting equipment, port infrastructure and, finally, transportation to the oilfield?

A modular system was used to lift the deckbox; the system therefore had to be assembled on site. Using a modular system is an enormous advantage from a logistics viewpoint. The equipment was manufactured in the Netherlands and most of its parts were brought to Brazil by sea.

As a milestone for the Brazilian shipbuilding and offshore industry, the P-55 inaugurated the two main shipbuilding sites used so far to construct systems: the Atlântico Sul Shipyard (lower hull), in Ipojuca in the state of Pernambuco, and the Rio Grande Naval Hub (upper hull) in Rio Grande in the state of Rio Grande do Sul. High-capacity tug boats will be used to transport the platform to the oilfield, a standard procedure.