A core of high-strength carbon fibre composite is the key to Nexans' new Lo-Sag conductor. 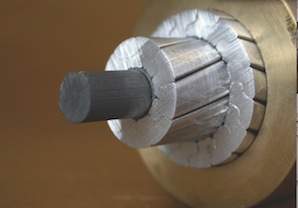 Compared with the steel core used in conventional ACSR (aluminium conductor steel reinforced) conductor designs, a carbon fibre core of equivalent diameter is stronger, lighter, and, most important, has a coefficient of thermal expansion that is about a factor of five less, resulting in less sag when the temperature increases.
Among the potential advantages are:
The capacity of existing installations can be greatly increased by conductor replacement ("reconductoring") while retaining the original towers and cable route.
The margin of additional current-carrying capacity available in emergencies is dramatically improved (a feature that might have proved particularly beneficial during last year’s Indian blackouts, for example) because the temperature can be considerably increased, to about 150°C or more, while still maintaining required clearances. Lines employing the new conductor can "be driven much harder by the electricity utility", as Nexans puts it.
For new installations, fewer pylons and longer spans (up to about 2.5 km) become possible (useful, for example, for South American river crossings), and the height of pylons can be reduced.

Lo-Sag design
The table above compares the properties of the Lo-Sag core material with those of steel.
The carbon fibres are in an epoxy matrix and carry all, or nearly all, of the mechanical load of the conductor.
The carbon fibre core is contained within an airtight aluminium tube to avoid any possibility of thermal oxidation or chemical corrosion of the carbon fibre composite (eg, due to ozone or atmospheric pollution). This protective aluminium cladding also provides mechanical protection and prevents delamination due to moisture and UV.
Around the cladding tube are two layers of aluminium alloy (predominantly Al with some Zr) conductor.
Lo-Sag employs the AeroZ design, which provides a very high density of conducting material because it uses interlocking Z shaped pieces rather than wires of circular cross-section. For comparison, a 23.4 mm diameter Lo-Sag AeroZ conductor has 341 mm2 of aluminium, while the same diameter of ACRS has only about 282 mm2 of aluminium.

Brazilian experience
Lo-Sag, the result of a five year development programme involving Nexans’ technology centres in France and Belgium, was originally a response to the particular needs of Brazil’s power transmission networks, where there is a critical need for more power in the large cities due to economic growth but where the difficulties associated with creation of new power routes in areas with a high population density constitutes a major bottleneck, both in land and equipment costs and the extended time scales required to obtain the necessary permits and rights of way. Nexans has therefore been working with Rio de Janeiro utility Light on the uprating of existing routes.
The first Lo-Sag field installation is currently in operation in Brazil in Light’s 138 kV transmission line connecting Cascadura to São Jose in Pavuna district, an area with a particular need for more electricity.
For this project the carbon fibre core was manufactured in France, the aluminum alloy was produced in Brazil and the entire conductor was assembled in a Belgian plant.
By using Lo-Sag it has proved possible to increase the power transmission capacity by 72.5% in this case. It is also estimated that the Lo-Sag conductor will have a life time of at least 40 years, which is similar to, or even better than, conventional conductors.
Light has recently placed an order for a second Lo-Sag conductor installation, for a 25 km line.
As well as upgrading in Brazil, the Lo-Sag concept is also considered to be suitable for transmission grid refurbishment projects elsewhere. Nexans estimates the total transmission line refurbishment market to be about 3 billion euros per year, similar in size to the new build market. Nexans also considers Lo-Sag to have applications in new build projects, particularly where large spans are required.