New roles for the recloser in the modern MV network

Neutral earthing and earth fault treatment have an impact on safety, supply quality, operational complexity and supply continuity. This article shows some ways a recloser can be used to provide an integrated solution as the central component in techniques being developed to improve the continuity of supply after the occurrence of a phase-to-earth fault. By David Dart, Noja Power Switchgear, Brisbane, Australia 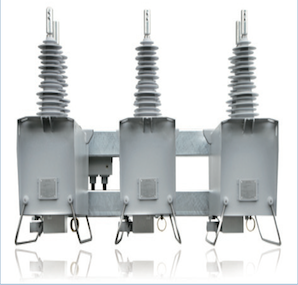 The advent of the microprocessor protection relay within a recloser controller has allowed the introduction of a significant number of new protection features and functionality. In parallel with these enhancements, the recloser switch has transformed into an extremely reliable switch which operates in a significantly faster time, based on the use of the current technology of a vacuum interrupter with an optimised magnetic actuator.

The combination of these two components into the single solution of a ‘recloser’ allows new capabilities that can be used to resolve a large number of problems that utilities are facing in their electrical networks today. The voltage ratings, circuit breaker current operation capability, reclose capability, quick operating times and integrated wide range of protection features suggest the recloser as a good all round solution in both indoor and outdoor environments.

As an example, one of the many areas where reclosers can significantly contribute is in the area of faulted phase grounding. Faulted phase grounding is based around reducing the risk associated with a single phase to earth fault whilst maintaining the continuity of supply to the end users for as long as possible, or at least to allow sufficient time for the utility to track down the fault.

There are five major grounding systems commonly in use in MV installations, namely ungrounded neutral, resistance grounding, reactance grounding, Petersen coil grounding and direct grounding. Each type has its advantages and its drawbacks.
The use of a specific grounding system is generally dependent on the type of electrical network, the safety requirements and local norms.

This should be considered in the light of the finding that 70-80% of faults are transient. Earth faults account for 70-80% of all faults and 83.5% of earth faults on MV networks are transient (Diskin E., ‘Networks Smart Automation’, ESB Networks, Eurelectric Smart Grid Academy, 13 May 2013) so significant advantages can be obtained through using the correct methodology in earthing practices in combination with the capabilities of today’s technologies.

Reclosers can provide some of the core advantages when applied to several of the different types of grounding systems in conjunction with different techniques used to maintain supply after a phase to ground fault has occurred.

Earthing in the substation

The type of neutral to earthing system used in the substation will generally be dependent on the requirements of personal safety, fire prevention and cost. For example in many European countries an arc suppression coil is used to connect to the transformer neutral to limit the capacitive earth fault current flowing when an earth fault occurs in a high or medium voltage network. The coil is commonly known as a Petersen coil. The first main advantage of this neutral-point-treatment, using the Petersen coil, is that in most cases the system is self-healing, as the arc distinguishes without any intervention of the protection system.

The second main advantage is the possibility of continuing the network operation during a sustained earth fault. As a consequence this reduces the number of interruptions of the customer’s power supply. Unfortunately, sustaining the supply under phase to earth fault conditions can result in step voltages being produced which result in safety issues, or in the cases of dry environmental conditions such as those found in Australia, bush fires. Another common problem is associated with the increased use of cables where fault restrikes can result in the creation of a multi-phase or cross-country fault.

The ground fault neutraliser is one method for helping to reduce these problems. It is much faster than traditional protection based on feeder tripping. It brings the fault current down to almost zero in typically 60 ms, without tripping the feeder.

The GFN measures shunt admittance continuously during healthy conditions. A detected change in the network triggers a new determination of zero sequence admittances in all three phases. When an earth fault occurs these admittances change and that allows the GFN to compensate for the fault condition (active and reactive current). The earth fault current, faulted phase and faulted feeder are determined from the GFN. The arrangement shown in Figure 2 illustrates the example of a GFN installed in a distribution substation.

The resulting earth fault current when the GFN is operating under phase to earth fault conditions can be in the order of 0.2A or less. Based on this level of fault current the actual location of the fault can be difficult to ascertain. To assist in the detection of the location of the fault, the GFN can gradually modify its compensation characteristic for short periods of time to increase the voltage to a level which will produce a fault current that can be detected by devices on the feeder whilst ensuring the Vo does not exceed a value which will become a safety issue or cause a fire.

Reclosers which provide a suitable algorithm can then be used to detect if the fault occurs through that specific device. The resulting information is then fed back from all reclosers on all feeders originating from the GFN compensated substation to provide a more accurate location for the faulted phase.

Faulted phase earthing monitors all three phase to earth voltages and the neutral voltage displacement. When it detects an earth fault it earths the faulted phase within the feeding substation. This diverts a very high proportion of the earth fault current away from the fault location again minimising the likelihood of voltage step potential safety issues or the creation of a fire due to arcing.

For example, at 4.2 A, and with an arc duration of less than approximately 70ms, the likelihood of an ignition causing a fire is almost negligible (2011 report by Coldham, Czerwinski and Marxsen). The circuit shown in Figure 3 indicates an example of the
network current flow when there is a faulted phase to earth. Figure 4 demonstrates the current flow after the faulted phase is grounded at the substation. The currents are redirected through the grounded phase at the substation.

The use of a recloser in performing the grounding of the faulted phase provides several key advantages:

The resulting benefit is a single cost effective flexible solution which can be optimised to provide the required result. Figure 1 shows an example of the application, a Noja Power single triple recloser used for faulted phase earthing at a substation in Australia.

J P Scholtz (‘Improved Transient Earth Fault Clearing On Solid And Resistance Earthed Mv Networks’, Department Of Electrical Engineering University Of Cape Town March 2011) indicates that in a solid or low resistance earthed network the feeder breaker is likely to be opened for the majority of transient earth faults as arcing may not self-extinguish owing to high earth fault currents. He also indicates that the combination of a low resistance earthed network with the advantages of an unearthed network by temporarily converting such an existing network into an unearthed network upon detection of an earth fault can have a substantial advantage. Scholtz has shown in field trials that the disconnection of the source transformer’s MV neutral connection to earth, and temporarily converting the network from low resistance earthed to unearthed, will allow transient earth faults to be cleared without the need to trip the feeder breaker. If the fault is cleared within the time the network is unearthed then no customer’s supply would have been interrupted.

Scholtz goes on to indicate that the circuit breaker in the neutral to earth connection is used to detect the earth fault and then more or less instantaneously open, in the order of 60 ms, thereby providing the unearthed network. The circuit breaker will remain open for a user configurable time, in the order of 2 to 10 seconds and then reclose. At this stage any arcing faults will normally have had time to extinguish.

When the circuit breaker recloses it must then stay closed for a set period to allow the normal protection to operate in the case where the earth fault has not been cleared during the period when the network is unearthed. In this application, the neutral earth switching can easily be achieved with the use of a recloser which will provide the reclosing capability, speed requirement, voltage ratings and protection capability within a single package.

Faulted phase grounding on the pole

As discussed above (under ‘faulted phase earthing’) a faulted phase may be grounded at the substation to divert a high
proportion of the earth fault current away from the fault location so as to minimise the likelihood of voltage step potential safety issues or the creation of a fire due to arcing.

Unfortunately, in circumstances where the feeders are very long, cross capacitive coupling of phases can itself induce sufficient voltage on a faulted phase to create a hazardous environment. A solution to this problem is to provide the faulted phase grounding capability in the form of a recloser at suitable positions along the length of the feeder. The recloser will monitor the state of each of the phases to ground and if the voltage meets specific threshold and timing requirements the recloser will close the faulted phase to ground, eliminating the high voltage potential generated by the length of the feeder line.

This article is based on the paper ‘Single phase earth faults; solutions using reclosers to meet the demands of the modern network‘ by Noja Power Switchgear, 2016.