Networking the big emitters of Yorkshire and Humber 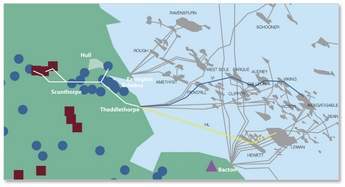 A new report from development agency Yorkshire Forward (Yorkshire-Forward.com) shows how a carbon capture and storage network might be developed for the Yorkshire and Humber region of the UK, home to some of the country’s largest fossil fuelled power plants. The new report, A carbon capture and storage network for Yorkshire and Humber, shows how the 60 t of carbon dioxide produced in the region each year from its concentration of coal and gas fired power plants could be liquefied then pumped out to depleted gas fields under the North Sea.

The study shows how a network could evolve using existing and new infrastructure in the region to connect major carbon emitters and in turn provide routes for carbon dioxide disposal into rock formations deep under the southern North Sea.

Costs for the network are predicted to be in excess of £2 billion at today’s prices and it would take 20 years to develop fully. However, the potential impact on the UK’s carbon emissions footprint is huge, the report’s authors believe.

According to Mike Smith, Head of Sustainable Development at Yorkshire Forward, “If the current level of industrial use of fossil fuels continues then we are looking at being able to store up to 320 million tonnes of carbon dioxide by 2030 and potentially 1500 million tonnes by 2050.”

As well as creating jobs, the network would also create inward investment in the region, its proposers believe, “as companies from across the UK come to see the North Sea beds off the Yorkshire coastline as the place where industrial CO2 can be safely captured and stored.”

Alastair Rennie, Project Director, AMEC Power and Process said: “The system has been designed using established best practice for pipelines and applies UK regulations. We have had initial discussions with the Health and Safety Executive with regard to the development of a CCS network, and will continue to seek their advice as work develops.”