Nemo may not be fictional for much longer

A key milestone in the Nemo project to link the UK and Belgian grids was achieved at year end when National Grid Nemo Link applied for an electricity interconnector licence, paving the way for the start of the procurement process. Staff report 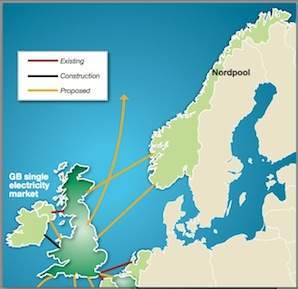 The prospect of the long-standing Nemo project to connect the UK and Belgian grids via an HVDC interconnector under the North Sea becoming a reality improved enormously in late December last year when National Grid Nemo Link Ltd made an application to the UK market regulator Ofgem for an electricity interconnector licence. A similar application will be made by Belgian TSO Elia to its electricity regulator CREG in due course. Under the Electricity Act of 1989 a licence is needed to participate in the operation of an electricity interconnector in Great Britain. An interconnector licence cannot be held in conjunction with any other electricity licence.
The interconnector is a joint project between National Grid Nemo Link Ltd, a subsidiary company of the UK’s National Grid Plc, and the Belgian Elia group and would be the first electricity link between the two countries. It is planned to run the 1000 MW HVDC undersea cable between Zeebrugge, Belgium and the site of the former Richborough power station near the UK coast in Kent – a distance of approximately 130 km. Although a feasibility study more than five years ago confirmed the value of the link, delays in its implementation have occurred, chiefly owing to the uncertainty of private financing. For both operators, it could also become a component in a larger plan to create a North Sea grid that would connect the countries on its shores and the large wind farms that are being built in its waters.
The feasibility of the Nemo project was confirmed in late 2008 and the first phase, to define more precisely the technical aspects of the connection and to initiate licensing procedures started in 2009. It was completed in the first half of 2011.
The link, which would be bidirectional, would be the third electricity interconnector between Kent and Europe. The BritNed link between UK and the Netherlands went into operation in 2011 and the IFA interconnector to France started up in 1986. Nemo aims to be in commercial operation by 2018. Its route represents the shortest crossing between the mainland UK and Belgium, which would help with costs and reduce the impact on the marine environment. A seabed study (the seabed in this section is not smooth sand but varies in depth from a few metres to nearly 100 metres, and is composed chiefly of dunes which move with the currents) to determine such aspects as the thermal conductivity of the soil, the optimal route, the laying techniques in accordance with the conditions of the seabed and the crossing with other underground cables was finalised in 2010.

Route
The connection will have two main components: a 130 km undersea link consisting of two separate DC?cables, ±500 kV operated as a single whole, and onshore sections of no more than a few kilometres, extending to converter substations and connection substations for the high voltage grids – 380 kV on the Belgian side and 400 kV in the UK. The connection was originally envisaged as having a capacity of
betweem 700 MW and 1300 MW, but a figure near to 1000 MW has now been settled on.
A seabed survey was carried out using non-intrusive methods (geophysical) and intrusive methods (geotechnical) to provide information on the seabed type, for both engineering and environmental purposes. The seabed is almost entirely sand, and the cables will be buried under the seabed either by a plough or trenching machine deployed by the main laying vessel directly, or by a support vessel following behind.

Recovery of costs
In Great Britain major links have been developed mostly as merchant interconnectors and no regulated returns are expected, but this form of financing exposes the investors to the full upside and downside of their investments. Additionally, the level of uncertainty surrounding the EC exemption process and the likely conditions that may be imposed can scare investors away.
In Europe, it is usual that interconnectors are developed by the national transmission company and comply with European Union legislation on third-party access, congestion management and use of revenues. Elia has been delivering required interconnections as regulated assets and recovering the cost from transmission tariffs agreed with regulator CERG. However, there is a provision for applying an exemption from European law and in a recent times BritNed successfully applied for such an exemption. In return, the European Commission imposed certain conditions including a cap on BritNed’s returns.
Ofgem and CREG published a joint consultation in 2011 on new regimes for regulating future investments in electricity interconnectors. This consultation proposed a ‘cap and floor’ regime for the interconnector that would allow the regulators to set a limit on returns from interconnector operations, with any excess being returned to consumers via future investments. The regime would also support the interconnector owner with supplementary funds if revenues fell below the floor.
Both partners have expressed an interest in the proposed new regulatory regime. Ofgem is also consulting to extend this ‘cap and floor’ regime to other subsea interconnector projects in the British Isles.