Moscow gets its first European-built CHP

Unit 8 of the Moscow ‘TPP-26’ combined heat and power facility will be the first power plant in Russia to be built by a major European company under a turnkey engineering procurement and construction contract. 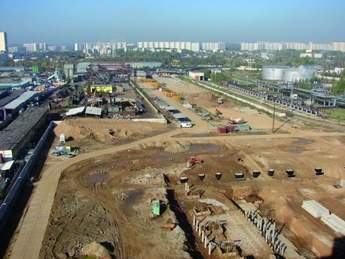 Design of the new plant is based on an Alstom KA26-1 combined cycle multi-shaft unit, delivering 420 MWe and up to 265 MWt for district heating. When complete, it will have an electrical efficiency of 59%, the highest at a Russian combined cycle power plant.

Over the last seven or eight years, Russia’s economy has experienced steady GDP growth which has led to a surge in electricity demand. At the same time, its power sector has suffered from decades of under-investment. Part of Russia’s strategy to improve its power situation and its economy is to replace inefficient gas fired power plant with the latest combined cycle plants. This will allow more efficient use of its gas resources and allow greater gas exports to the higher priced European markets.

In line with this strategy, Mosenergo, a power utility in the city of Moscow, awarded a contract to Alstom Power to build TPP-26 unit 8, a new combined cycle cogeneration project in a populated area on the outer limits of the city. Significantly, the r280 million project represents the first EPC contract to be signed by a major European company in Russia. Based on the latest technology, the plant will have an electrical efficiency of 59%, the highest at any combined cycle plant in Russia.

The plant will be built by a consortium that includes Alstom and local partner Russian power engineering group Energomachinostroitelny Alliance (EM Alliance). As consortium leader, Alstom Power will carry out the conceptual and basic engineering, supply all the critical components and undertake project management functions for the consortium on site. EM Alliance will manage the detailed engineering work excluding the power train and procure some of the major equipment such as the cooling tower, electrical equipment, heat exchangers and piping for the district heating system.

This new cogeneration plant will be one of a number of combined cycle power plants to be built in the city. Mosenergo has a network with a capacity of 10 600 MW, which represents 7% of all thermal generation capacity in Russia. The utility has 17 thermal power plants located in and around the municipality of Moscow. Such plants have always been designed and developed to provide combined heat and power for the harsh Russian winter conditions. The new unit will increase the installed capacity of TPP-26 from around 1400 MWe to about 1820 MWe.

Mosenergo’s decision to award the turnkey EPC contract to Alstom was due to two main factors, says Alstom – skills and technology. Firstly, few new plants have been built in Russia during recent years, leading to a situation where there is a general lack of experienced Russian designers and engineers to build them. This lack of expert manpower coincides with a surge in electricity and thermal heating demand in Russia, to be met by 20 000 MW of gas fired combined cycle power plant projects that form an integral part of the announced RAO-UES US$ 118 billion investment plan for the power generation sector up to 2012. Hence the need to look beyond the borders to a foreign company.

Alstom was selected to build the project following a competitive tender that involved the major large gas turbine manufacturers. Here the second factor – the technical capabilities and efficiency of the GT26 in combined cycle operation – was a very influential in helping Alstom to win the contract. The ability to achieve an electrical efficiency of 59% makes this, according to Alstom, the most advanced combined cycle plant available. Meanwhile, the additional use of the waste steam to provide district heating brings the overall efficiency of the plant to more than 85 %.

Achieving this high operational efficiency will reduce gas usage by about 30 % compared with existing plants in the country. Mosenergo estimates that during the first year of operation, the transfer of load from old plants to the new will save 326 million m3 of natural gas. This equates to a financial saving of RUR 1381 million ($55 million) at 2011 estimated gas prices.

It is anticipated that the KA26-1 multi-shaft design will provide the plant with the necessary flexibility to perform in various operating modes. The single combined cycle block features a GT26 gas turbine plus a heat recovery steam generator and a steam turbine, with each of the turbines powering a dedicated air-cooled generator.

The GT26 will burn natural gas with liquid fuel as the backup. Emissions from the plant will be well below the maximum permissible levels for NOx and CO.

The turbine has a rated power output of 266 MW at an ambient temperature of 15°C and an exhaust gas flow of 620 kg/s. Exhaust gas leaving the gas turbine at about 625°C will enter a three-pressure re-heat, horizontal-type heat recovery steam generator. The HRSG is capable of producing steam without operation of the gas turbine. The steam will enter a three casing steam turbine that consists of a reheat type single flow high pressure section (HP), a single flow intermediate pressure (IP) section and a double flow low pressure section (LP). Steam for district heating is extracted from the IP exhaust of the steam turbine for feeding to the district heating network at 28°C flow temperature.

Because all the key components are designed and supplied by Alstom, the company is in a better position to integrate them in a way that produces the most effective solution in terms of efficiency and flexibility. Although the plant is designed primarily for optimum electricity production, there are two possible modes of operation.

In condensing mode, district heat extraction is closed off. Exhaust steam from the HP steam turbine passes through the reheater section of the HRSG. This steam is directed to the IP steam turbine, passing through the cross-over line to the LP steam turbine, and finally condensed in the condenser. In this mode the load on the combined cycle plant is controlled according to grid requirements.

Computer graphic of the new CHP unit now under construction. The power island is arranged in a multi-shaft configuation consisting of a single combined cycle block powering two air-cooled generators

The project is advancing very quickly. The contract was signed on December 15, 2006 and Notice to Proceed was issued on February 1, 2007. Piling and foundation work is now under way and the foundation work for the main machines – gas turbine, steam turbine and HRSG – will be finalised by the end of November 2007.

Hot section commissioning will begin with firing of the HRSG to produce steam. This will be followed by firing of the gas and steam turbines.

The plant is scheduled for handover in June 2009. It is expected that this new cogeneration plant will set a new benchmark in efficiency for Russian combined cycle plants and, it is hoped, usher in a new era of co-operation between Russian operators and European power companies.